Robe Loves the 90s In Spain 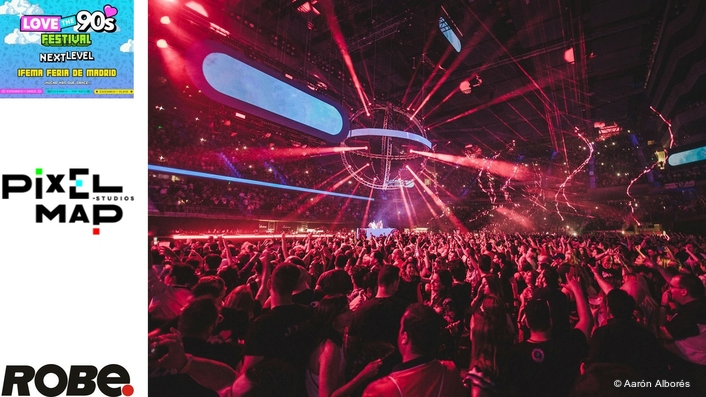 The 1990s is a popular period for musical renaissances, and in Spain they love nothing more than a bit of Eurobeat, a pumpingly rhythmic dancey nostalgia that has rocketed the “Love the 90’s” festival into popular culture, celebrated with three extravaganza shows in 2019 staged in Madrid, Seville and Valencia! Lighting and show designer Eduardo Valverde from Madrid-based creative specialist Pixelmap Studios was this year’s creative director, and his brief included imagineering the stage layout, set architecture including LED screens and the lighting.

Prominent on his lighting plot were around 150 Robe moving lights including Pointes, MegaPointes, LEDBeam 150s and LEDWash 800s, complete with three RoboSpot systems run with BMFL Spots, all supplied by rental company Fluge.

Due to the different venues, the rig design varied slightly for all of the shows, but the Robes were right at the heart of the aesthetics for each of the one-day hi-energy, all-action concerts featuring a dynamic multi-artist line-up with Dr Alban, La Bouche, Sonique and many more classic sounds from the era.

This year the stage design took on a new dimension as Eduardo and his team created a near 360º experience with a 45 metre wide stage and a 30-meter runway thrusting out from the front that sliced the near-stage audience into two, with a circular B-stage at the end.

Flying above this B-Stage was a huge 9-metre diameter ‘disco ball’ made up of curved trussing, rigged with lights and a think ring of LED. For some acts, the DJ booth was located on the B-stage, putting the performers right in the middle of the fans, which really boosted the show energy and excitement levels.

This 360-degree concept – in which production ‘wrapped’ around 270 degrees of the stage –leaving room only for a small amount of backstage and technical space at the back, was the starting point for the lighting as it meant there were multiple viewing and camera angles which needed to be covered with lights.

There was also a vast amount of LED screen flown around the stage – 380 square metres in total – including several distinctive ‘lozenge’ shaped pieces of screen, and there were also some circular lighting trusses which further defined the architecture and maintained the ‘curvature’ of the production aesthetics. 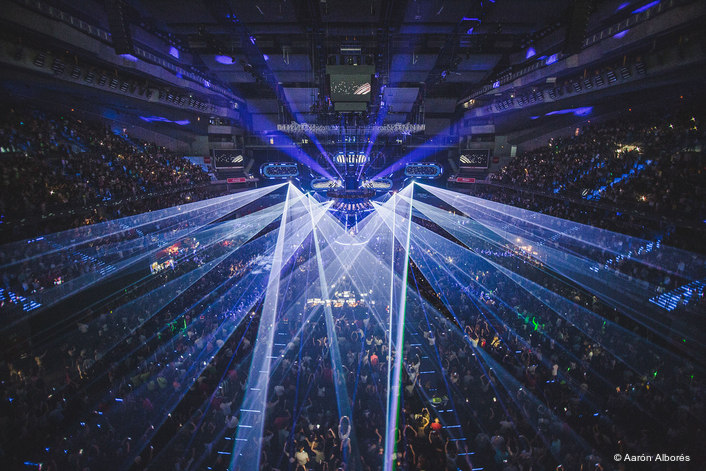 In Madrid, the show was staged at the 17,000 capacity WiZink Centre, a fantastic venue with serious load capacities in the roof facilitating the most ambitious productions.

For the Valencia and Seville editions, a 20-metre-high ground support was installed and all the major production and architectural elements – including the disco ball – were flown from this.

Lighting was divided into three zones.

The first one was above the main stage and included an overall mothergrid in the roof, with sub-hung circular trusses providing additional lighting positions. This zone also included the lozenge shaped video screens.

The second zone covered the runway. Trusses were flown above to provide lighting positions to cover the catwalk itself and the audience areas both sides of it.

The third lighting area was around the DJ booth on the B-stage and the trussing ball that proudly mimicked the legendary disco ball of the 1990s, which itself was rigged with 48 Robe LEDBeam 150s to create dynamic beam effects.

Eduardo specified all the lights, and Robe is often his moving light of choice.

On this occasion, it was because the fixtures offered all the brightness and features needed to work with the vast amount of LED in the room and help create the looks and scenes he wanted to achieve.

Lighting also had to be fluid and flexible for each zone, so he needed fixtures with a good array of features, and these five types of Robe moving lights all provided him with an ideal lighting base for the show. 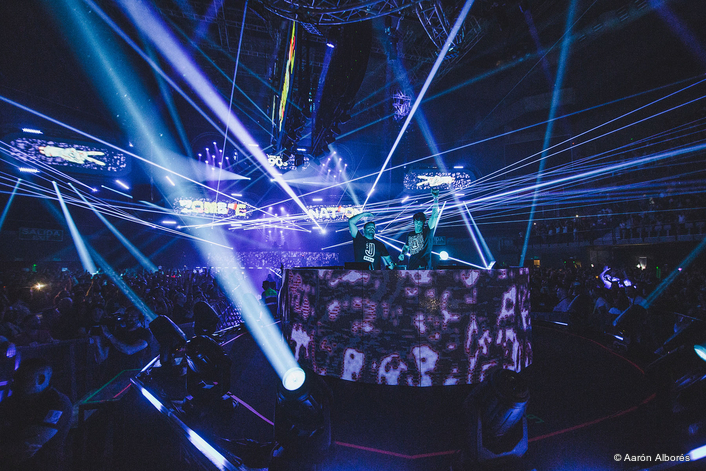 On the main stage he needed a ‘contra-light’ to create spectacular beam effects blasting through the ambient light-field of the screens, for which he chose MegaPointes for their sheer intensity.

To illuminate the stage area generally and create different environments, the LEDWash 800s did a great job. They coloured the dance floor and created secondary beam effects.

The original idea was to have an entire rig of MegaPointes, but to hit the lighting budget, a slightly different ‘combined fixture’ approach was needed to achieve the result!

On the floor, Pointes and MegaPointes were selected as a compact ‘multi-functional’ fixtures with a “massive” punch.

The four BMFL Spots on the RoboSpot system were all rigged on the front truss and operated from four base stations located at the dimmers.

For the DJ booth and disco ball, LEDBeam 150s were a perfect choice to get piercing and powerful rays blasting of the ball! In fact, Edu admits that they tested several small fixtures from other manufacturers before committing … but nothing was better than the LEDBeam 150 which beat its rivals in all criteria - size, weight, power and zoom. “It won really easily!” he confirmed.

In addition to the Robes there were around 50 x LED floods on the rig plus 400 or so LED battens!

Undoubtedly the most challenging element of this project was controlling and running over 600 fixtures of which at least 400 were moving or ‘intelligent’. Apart from the environment being virtually 360º, from the operating position it was impossible to see what is happening on all sides, so the set-up, programming and tech periods were intense and complex, and no matter how extensive and thorough the visualization, it wasn’t until actually getting on site that knew exactly how the visuals would work and flow together.

The general format of the shows was that each artist performs a maximum of 4 tracks, so there were a lot of quick changeovers to keep the pace rolling. 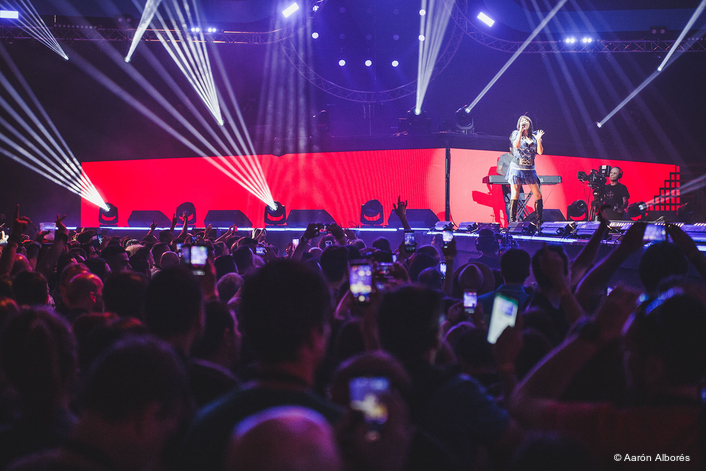 A lot of advance prep and detail in dealing with the artists' managements, productions and their own creative teams meant Edu and co. received most of their specific video content in advance and could programme this into the show media servers. They could also previsualise a good deal of the lighting for each one and match it to video content, etc. 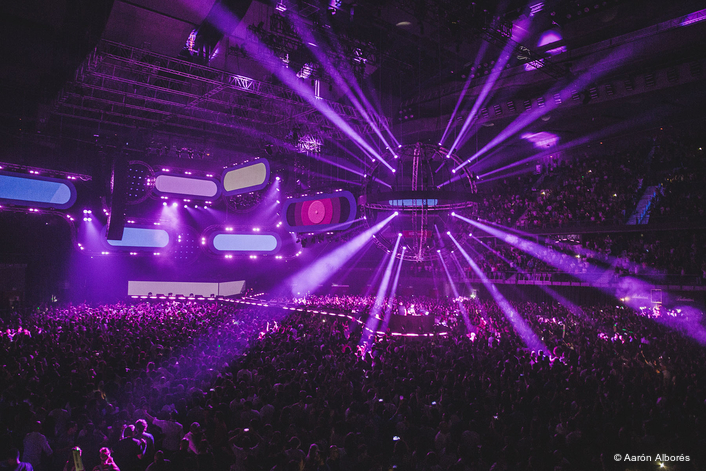 All of Fluge’s Robe stock has been supplied by San Sebastian-based Spanish distributor EES.

The initial design concept for the next ‘Love The 90’s’ show begins almost immediately after the current shows are finished. Edu loves the fun and creative freedoms of working on a project like this, and he and Pixelmap Studios are already working on the 2020 edition!