Robe Has So Much Fun with Young Thug 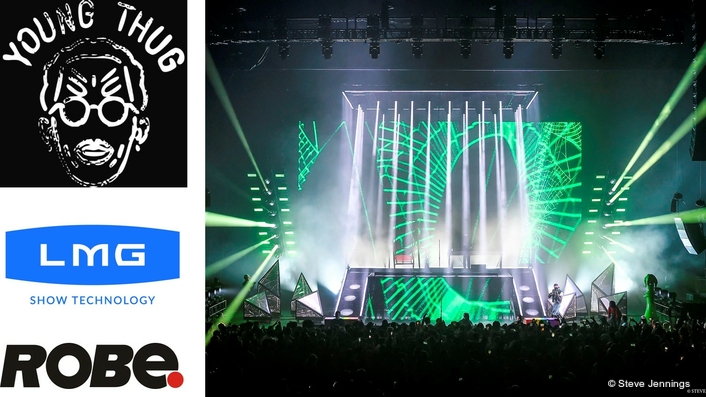 Rising star rapper and songwriter Young Thug has cut a reputation for musical experimentalism, style and dynamic collaborations, and just finished a major US arena tour co-headlining with Machine Gun Kelly (MGK) which has been hugely popular and well-received. Lighting and production designer, Stu Dingley was asked onboard the production team by creative director and production designer Meggan McKenzie (Kenzi). Meggan originated the creative concepts for the set and staging designs which they worked on together to evolve a look and style that would support both headline artists.

Once this started to materialize, it provided a strong starting point for Stu’s lighting scheme for which he specified 40 x Robe MegaPointes, 20 x BMFL WashBeams and 24 x Robe Robin 600 LEDWash units as his main moving lights.

These were supplied, along with the rest of the lighting equipment, by LMG where the account was handled by Craig Mitchell, who Stu notes “provided an outstanding service as usual.” 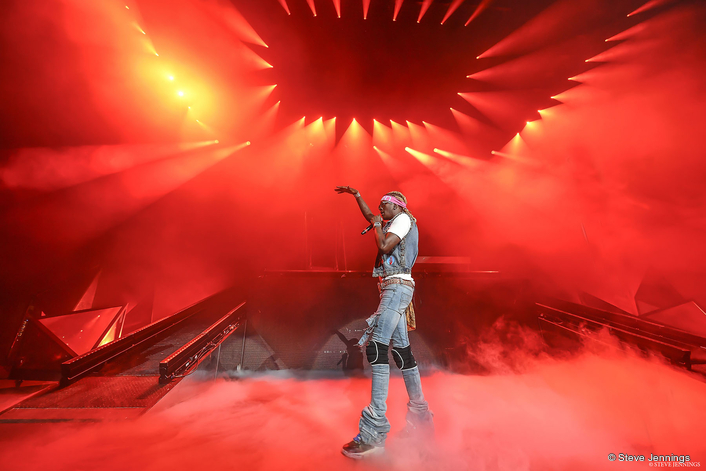 The front edge of the riser was also clad in blow-through LED panels with a wall of LEDWash 600 fixtures behind.

Being a co-headliner, a major requirement was having enough variations in the scenic and lighting designs to offer both artists completely different and individual performance environments.

A box truss was installed overhead, flanked by two ‘finger’ trusses for the main lighting positions, together with an upstage and downstage truss. The box and fingers trusses were automated to create multiple looks and shapes with the rig – from flat overhead wash looks, to aggressive 45-degree positions mirroring the riser ramps. 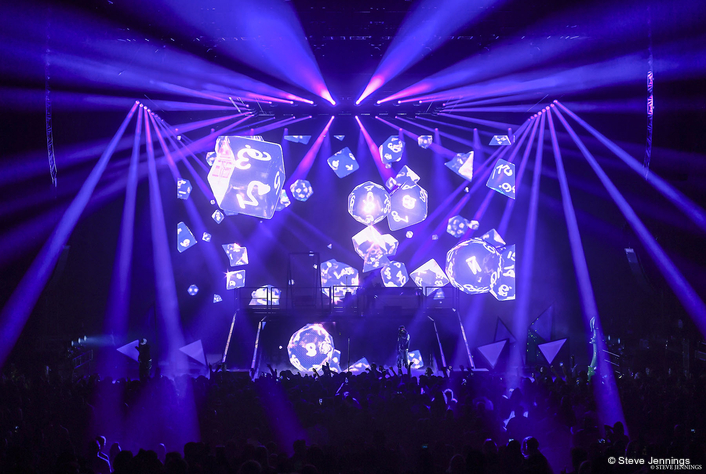 Stu and Meggan wanted to be able to close the stage space right down for some sections of the show, effectively transforming it into a room for a separate performance area, giving the artist(s) an intimate space, so the trussing configuration was drawn up to facilitate this, with the box truss being able to start the show at ground level and rise throughout the intro.

The MegaPointes were positioned on the two finger trusses and around the box truss alongside numerous strobes. They were used to create all the big signature looks and eye-candy moments. “I simply needed the most exciting and brightest moving lights available” explained Stu “and in my opinion right now, that is MegaPointes and BMFLs.” 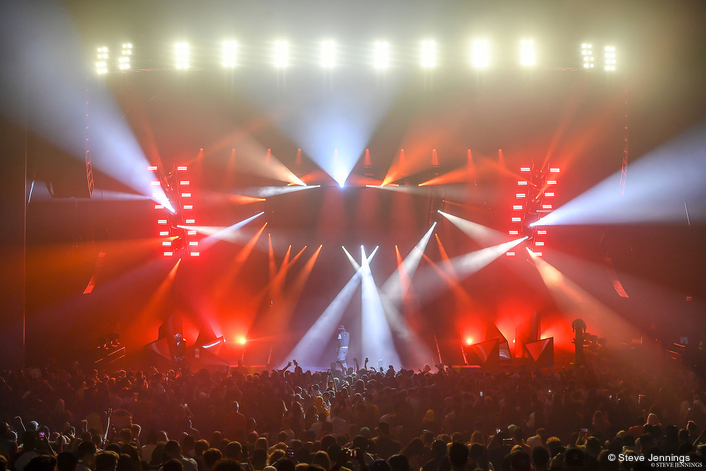 The BMFL WashBeams were along the back truss, and also in a row on the floor just in front of the video wall. “We needed power looks and lights that held their own against the video, so that also informed the choice of both types of fixture.” stated Stu, who is a big fan of Robe products.

Stu likes MegaPointes in particular and is consistently spec’ing them onto shows and tours as “reliable and excellent” creative tools.

He made the most of their feature set, like the accurate shuttering. One of Thug’s default lighting looks that recurred throughout the set in different forms was a line of BMFL WashBeams focused along the front of the stage, creating a dramatic wall of lights from the top of the rig. 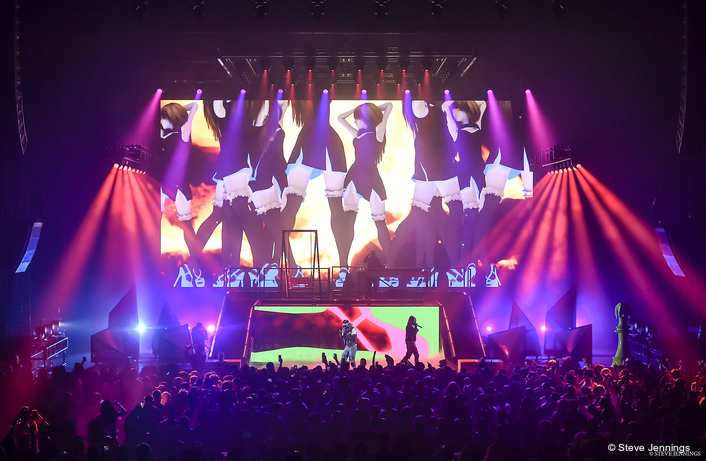 Sometimes he used the BMFL’s zoom and frost features to shift and alter the collective looks of these fixtures which generally stayed focused on the downstage area but also allowed for bold, revealing blow-through-the-rig looks.

While the lighting rig was designed to work practically for both artists, lighting for MGK’s set was operated by his own LD, Wes Henrard, who Stu says “brought a completely different perspective and operational style to the rig, creating some incredibly energetic moments in the arenas before Thug took to the stage.”

Wes was also very happy to have Robes in the rig!

Each artist played for 75 minutes. MGK went first with plenty of epic rock-show and lighting bigness and boldness, which flipped to being starker and rawer when Stu took over to match Thug’s animated and uniquely energized live delivery.

Meggan was entirely entrusted by Young Thug to bring his creative vision to fruition from her initial concept to final production, and she oversaw all elements of the show closely.

Building a strong visual team for Young Thug is a crucial element to the final product, Meggan is very particular with whom she chooses to work with, as the team are responsible for the ultimate success of the show. She trusted Stu implicitly to produce an exciting lightshow relevant to the artist’s music as well as bring his own ideas into the production and set design.

Lighting director, James Washer, programmed and looked after the show on the road.

“James is an outstanding programmer and LD, so it was a real pleasure to have the chance to work together on this project” observes Stu. 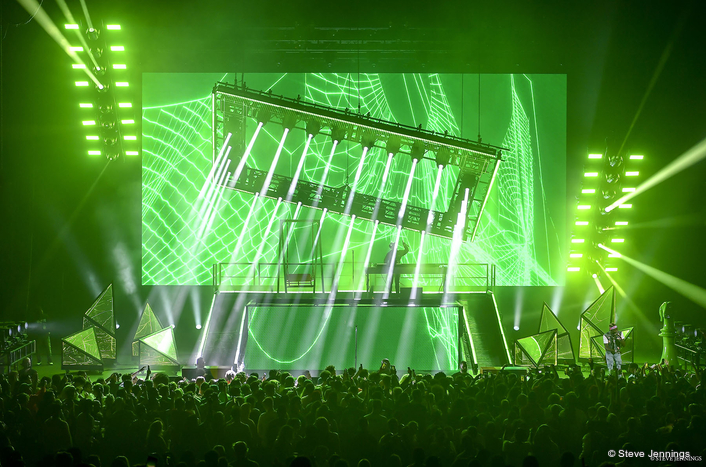 Stu really enjoyed the creative process and formulating the show. “Collaborating with Meggan is always great. She has a unique vision and many different ideas so combining our different strengths is a really positive experience.”

Stu has been using Robe products since his professional career started around nine years ago after he graduated from Rose Bruford College in London, UK. He has worked hard and gained recognition in a short time, making the move to LA a year ago - to be right amidst the action - and continue building his career designing production and lighting in the live touring, concert sectors and music TV sectors.