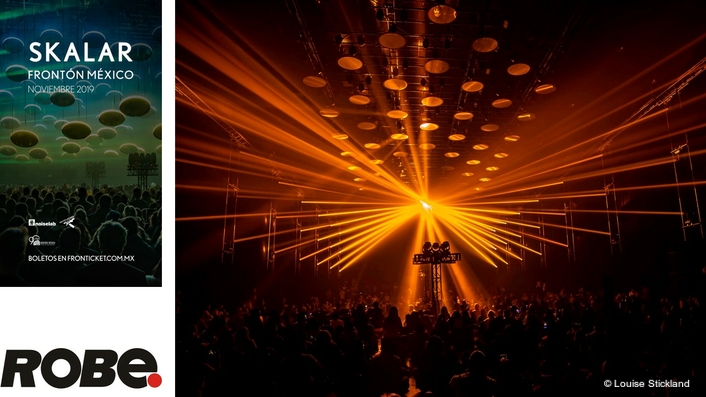 Light artist and designer Christopher Bauder and composer / music producer Kanding Ray brought their epic immersive kinetic light / sonic art piece SKALAR to Mexico City for a 5-week installation, which also featured seven live shows in Fronton Mexico, on the Plaza de la Republica, right in the heart of this massive vibrant megalopolis. Ninety Robe Pointe moving lights plus 65 x double-sided mirrors each with a perimeter ring of 180 addressable pixels and suspended on 195 x custom WHITEvoid motors … were at the core of the work.

SKALAR premiered at Kraftwerk in Berlin last year. The former turbine hall of the derelict old power station provided a dramatic, charismatic, industrial cathedral-like backdrop for this powerful piece. It was a huge success, and Christopher’s ambition was always to tour it to other cool places around the world.

Fronton Mexico offered similar installation and spatial parameters for the lighting, mirrors / kinetic winch system and audio set-ups, but being a black box space, it was a completely new environment in which to present the immersive SKALAR experience.

These challenges appealed to Christopher, David Letellier (Kanding Ray) and production manager Martin Kuhn who has worked with Christopher on several projects and is based in Germany and Mexico. 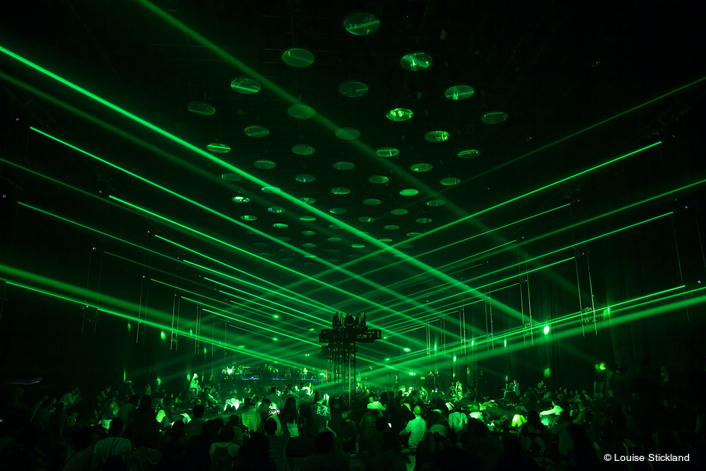 Whilst essentially the same show, some of the soundscape and lighting cues were reimagined for Mexico. While nothing needed radical changing, Christopher and David took the opportunity to finesse their intricate collaboration with the experience and information gained in Berlin, to work even more coherently and with additional impact.

SKALAR juxtaposes technology and imagination in an invigorating headspace … engaging the mind and soul as guests lose themselves in a visual and sonic atmosphere that generates the very human reactions of profound emotion.

Based on Plutchik’s ‘wheel of emotions’, audiences experience the full range of eight primary emotions - Anticipation, Anger, Disgust, Fear, Joy, Sadness, Surprise and Trust – during the live SKALAR show – with Kanding Ray playing and Christopher operating the lights. The looped version of the installation which played every day touched on the six primary emotions.

The opportunity of taking SKALAR to Mexico City was initially explored by the project’s production manager Marin Kuhn – also a lighting designer and programmer in his own right.

Martin put the idea to promoter Héctor Mijangos, who is well-known on the Mexican electronic music scene, and he was extremely interested. A series of connections and happy coincidences led to the show being booked and installed into the Fronton venue.

“This work was totally unique and ground-breaking in Mexico,” stated Hector, “and all of us involved were extremely keen to be part of something so fresh, innovative and different.” 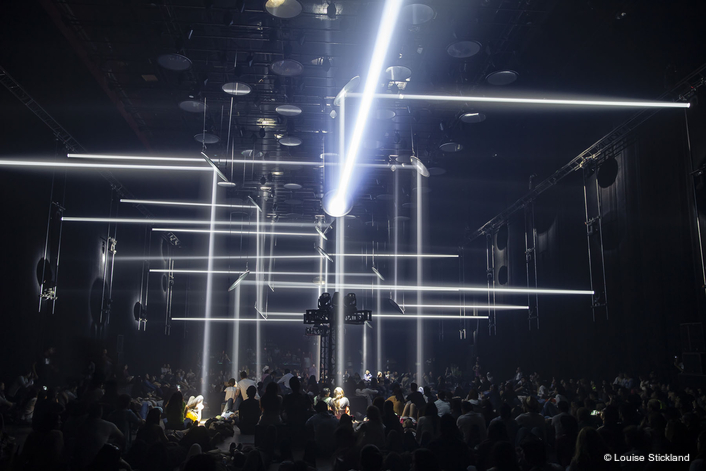 Martin and local production manager Jose “Pepe” Cuevas coordinated all the local suppliers which included LED Project who supplied the Robe Pointes with support from Robe’s International team – having supported the original installation in Berlin as a technical partner – together with Robe’s Mexican distributor, Showco.

LED Project has one of the largest stocks of Robe moving lights in Mexico and owner Sergio Serrano has been instrumental in establishing the brand in the country. He commented, “I am very honoured to have been part of SKALAR Mexico, it’s been fantastic to work on something of this scale with a fantastic international team and to see spectacular results.”

Martin and local production manager Jose “Pepe” Cuevas coordinated all the local suppliers which included LED Project who supplied the Robe Pointes with support from Robe’s International team – having supported the original installation in Berlin as a technical partner – together with Robe’s Mexican distributor, Showco.

LED Project has one of the largest stocks of Robe moving lights in Mexico and owner Sergio Serrano has been instrumental in establishing the brand in the country. He commented, “I am very honoured to have been part of SKALAR Mexico, it’s been fantastic to work on something of this scale with a fantastic international team and to see spectacular results.”

SKALAR optically is all about the relationship between the real beams coming from the fixtures onto the mirror and the virtual ‘secondary’ beams being created and bounced between the mirrors and the various endpoints around the room.

The different resonance, tonality, texture and quality of the light beams and the viewing angles and proximities affect perception and therefore everyone’s reactions … and resulting sensory experiences.

Each mirror was controlled by three winches giving 7 metres of up / down movement plus pan / tilt, so they can move incredibly smoothly on XY and Z axes making their kinesis three-dimensional and fluid. The mirror movement is controlled via Art-Net by KINETIC LIGHTS’ proprietary KLC software platform and the whole system is networked. 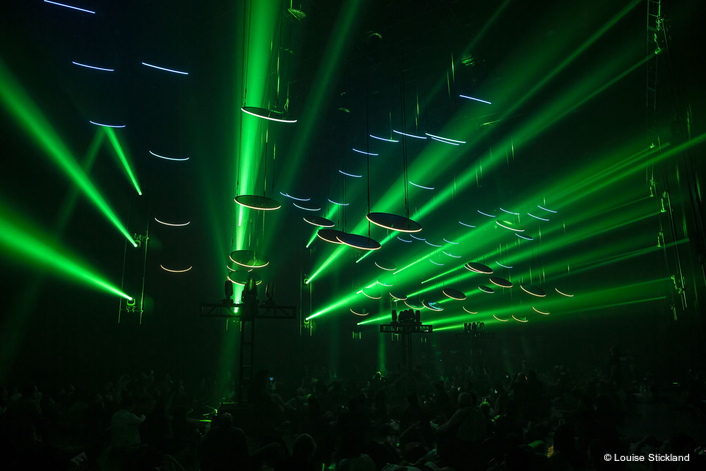 When it came to selecting a light source for the original installation in Berlin, Christopher wanted something bright, precise and intense in output.

He also wanted a dynamic fixture with many options to modify the beam, plus something small and accurate in terms of cue repeatability across distances. The frost and the strobing function with its adjustable frame rate are also present in SKALAR, and in fact, several Pointe functions are utilized across the looped SKALAR show and during the live concerts.

The Pointe beams pierced the darkness beautifully, paired with the mirrors gracefully gliding into different formations, occasionally jolted by a searing white-out and backed by Kanding Ray’s mesmeric, rhythmic soundtrack that has a compelling calming effect.

DMX data signals for the Pointes were converted from Art-Net and integrated into the custom KLC computer where Christopher and his software wizards programmed a series of lighting treatments emulating and stimulating emotions – heart-opening, playful and joyful on one end of the scale to dark, fragmented and angry on the other. These were rendered as cues in real-time during playback, triggered by MIDI keys from the Ableton Live system running the master track during the looped SKALAR show.

A big difference between Mexico and Berlin was that the piece had to be completely stand-alone inside the pitch-black velvet bolton clad Fronton auditorium … unlike Kraftwerk where the ambient light revealed an endless vista of raw industrial architecture and detail.

This meant that the whole visual focus in Mexico was on the light beams. The effects were to make it even more all-encompassing, truly immersive and easier to lose yourself and focus your energy on feeling those emotions.

The audiences were also completely different – to everyone’s delight.

In Mexico – in addition to the art lovers, students, alt culture aficionados and the plain curious – a striking part of the demographic was families, with small and young children also attending in larger groups and with friends, and they reacted very differently! “Often, they would be noisier, more animated, talkative through certain bits, they would dance and interact together …. and generally seemed to embrace the whole experience more like a highly communicative party rather than a reflective piece of art,” observed Christopher.

A good surprise, he was really pleased with this reaction. “This work is all about changing perceptions – people’s perceptions of themselves, their thoughts, how they relate to music, lighting and one another in this focussed environment.

“Changing culture and environment means that the whole experience can fundamentally shift just as the ‘experience’ does for those with different personalities. This is something I’ve always wanted for SKALAR and why I am so keen to take it around the world.”

Christopher and David also performed seven special SKALAR live shows where they are manipulating the sounds and visuals. These performances are more intense and use the expanded range of all eight emotions and the associated lighting and sound treatments.

And while the experiential elements of the work in Mexico City were different for visitors, so were the practicalities of the installation!

Martin Kuhn, Hector and Pepe Cuevas fully embraced the cultural differences that needed negotiating to stage a super-precise large-scale art installation originally devised for an ex-power station in Germany and transitioned to a black-box space in Mexico.

Ahead of the show, all the Robe Pointes were re-lamped for continuity and to give the best results, and the on-site technical installation was completed over a two-week period with 10 LED Project crew working on the lighting. 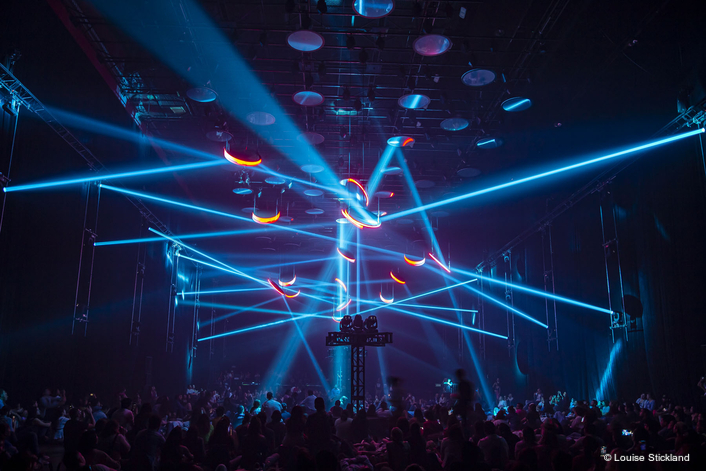 Sound was installed by Serpro Producciones from Mexico City. Working in a draped black box was a huge enhancement sonically compared to the insouciant reverberance of Kraftwerk!

Fronton Mexico proved an ideal venue for a work of this scale. The spectacular art deco building was originally opened in 1929, but lay unused and abandoned for many years until a total refurbishment completed in 2017 thrust it right back to the forefront of the dynamic CDMX music and live events scene as a centrally-located, truly multifunctional performance hub.

SKALAR Mexico was a huge success and enjoyed by over 40,000 people.

There’s future talk of staging it elsewhere in Mexico, but for those wanting to catch it again in Europe, the next dates are in Amsterdam Jan 10th – Feb 5th 2020 in the Gashouder … a fabulous ex-industrial venue with a completely new set of technical and creative parameters.