Robe is Hardwired for Metallica 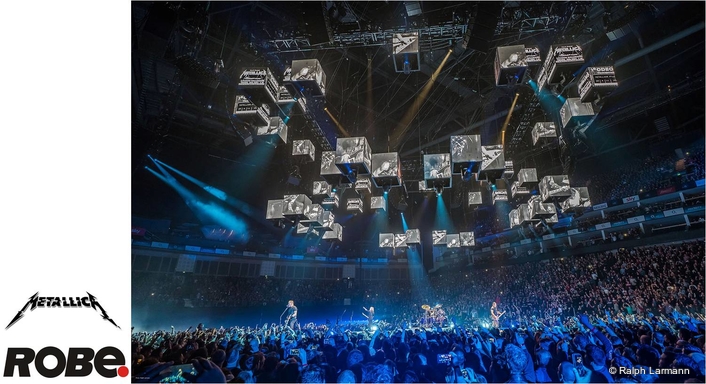 Thrash heavy metal megastars and heroes Metallica are in the middle of a world tour following the release of their number one album “Hardwired … to Self-Destruct” at the end of 2016, featuring a stunning and provocative in-the-round production design by Dan Braun for the arena section, with highly creative lighting by Rob Koenig and 72 x Robe BMFL WashBeams from Premier Global Production as the main lighting fixtures on the rig.

Rob has worked with the band for around nine years, and in that time, they have performed several in-the-round tours. It’s a format they prefer for getting physically and psychologically closer to their fans.

For this one – which started with a stadium section and is currently playing arenas – Dan’s idea was based around 52 x 1 meter square video cubes suspended above the stage, 36 of which are on steel cables and a custom motion controlled hoist system developed by TAIT and the other 16 are in fixed positions.

Apart from presenting a distinctive and very precise aesthetic, this set architecture has really defined Rob’s lighting positions for the indoor legs of the tour.
As per Dan’s request, there is no ‘traditional’ trussing on the show, instead all the BMFL WashBeams are attached to and associated with a video cube. 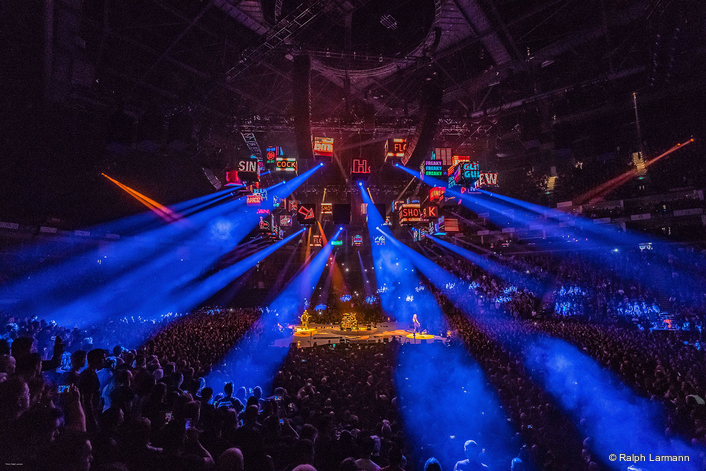 A combination of the TAIT Navigator and grandMA2 control systems and virtual markers in the MA 3D visualizer are being used to process and physically pinpoint the lighting positions. A Disguise (formally known as d3) video server also receives positional information from the Navigator to map the video exactly to the 4-faceted moving cubes.

Of the 72 BMFL WashBeams, 52 are mounted to the bottom of the cube framing structures. The other 20 are rigged on two long cable bridge trusses along the dasher line of the arena and used as follow spots on the four band members.

They are linked to a Spotrack remote follow spotting system, with the operators standing near the FOH platform doing the pan / tilt and actual following, while Rob has control over all the other parameters of the BMFL follow spots via his grandMA console. 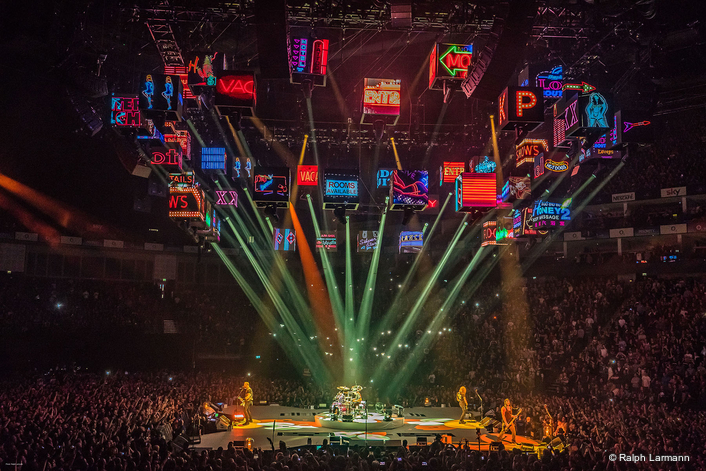 Rob needed 20 overhead follow spots – five per band member – and using BMFL WashBeams in this scenario is an excellent solution. It’s more practical, economical and safer than having 20 operators in the roof each night amidst tons of pyro!
Additionally, it provides excellent continuity.

Rob first used BMFL WashBeams on the 2016 Guns ‘n’ Roses tour for which he worked as lighting director and programmer with Phil Ealy, and was absolutely “blown away” with how many different permutations and options there were with these powerful fixtures … for coloring and texturing the stage and the artists.
“It’s the best high-powered hybrid fixture on the market right now,” he stated.

The BMFL WashBeams are the primary lights of the Metallica design and are used in every song except one.
It’s not a massive lighting rig for an arena tour … mindful to keep the structural integrity of the video cube design in mind. However, they give plenty of latitude for imaginatively lighting the band on the 44 ft. square stage below.

There are some other lights on the rig - 32 x hybrid moving fixtures on top of stacks of Meyer VLFC subs in the corners of the arenas, and a selection of different strobes - 44 x LED wash / strobes flown for audience light, plus 16 x strobes and 10 x flood / blinder / strobes on the stage floor. Other than these, it’s all down to the BMFL WashBeams. While the show is video driven, Rob relishes the challenge of using the ‘negative space’ for weaving in his lighting looks and moments.

There is a lot of communication between lighting and video on the tour and Rob is in constant contact with the band’s content creator Marcus Lyall of KPX Video and Andrea Cuius of Nocte Studio from London as well as video director on the road, Gene McAuliffe.

He thinks that fixture counts are generally getting bigger on tour and admits he was a little nervous about lighting this one with around 140. The minimalist approach has also paid off. 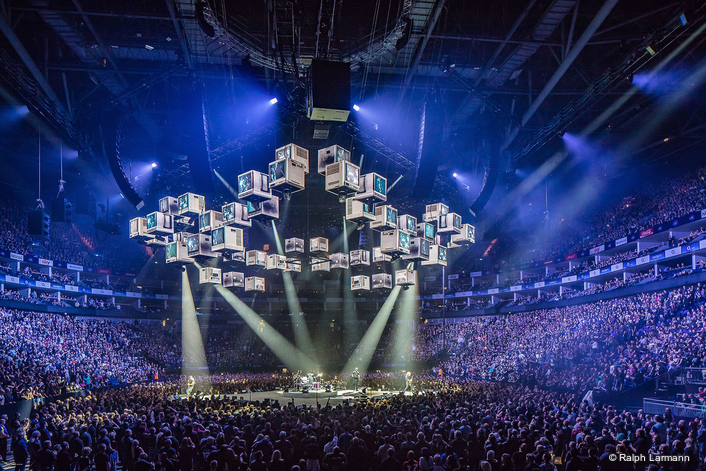 “This show has been one of the more uniquely collaborative shows I have ever worked on, very challenging and very rewarding for all of us,” he commented.
The biggest task is making so few fixtures go such an incredibly long way which is required in order to give each song in a fast-paced, full-assault set … a different look and feel.

Talking more generally about Robe, Rob thinks the brand is at the top of its game at the moment, “From the more specialized fixtures to signature luminaires like the BMFL … Robe has developed a series of lights that are reliable, robust and ideal for touring.”

He admits that he initially thought the BMFL series might be a little too ‘refined’ for the kind of heavy metal chaos characteristic of a Metallica show. However, when the BMFL WashBeam was launched, “it smashed that wall – it’s great for all genres – metal, pop, dance … or for television work. It’s just highly flexible!”
He added wryly, “We actually beat the crap out of them on the stadium leg of the tour which had no roof ... and they all survived admirably!”

Rob runs lighting for the shows himself using a grandMA2 console. He worked closely with programmer Joe Cabrera who helped ensure the infrastructure was set up for the Navigator, MA and disguise control systems to all talk to one other in addition to programming lighting, while second lighting programmer Troy Eckerman also collaborated with Rob in refining the complexity of the lighting cues. 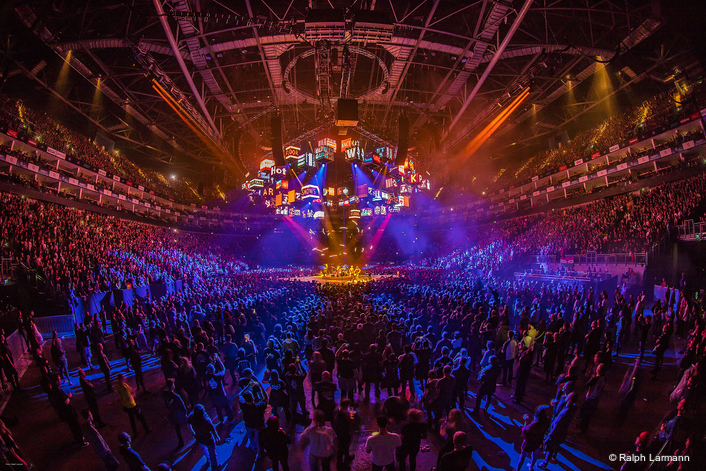 At the start of the fall European leg, they underwent a few days of production rehearsals in Malmo, Sweden, ahead of the first gig in Copenhagen’s Royal Arena.

Premier Global Production, based in Nashville, Tennessee, is the tour’s worldwide lighting vendor, where the account is looked after by Anthony “Geddy” Kordyjaka and James Vollhoffer.

About Rob Koenig
The music … is what Rob Koenig most loves about designing and working on Metallica shows! 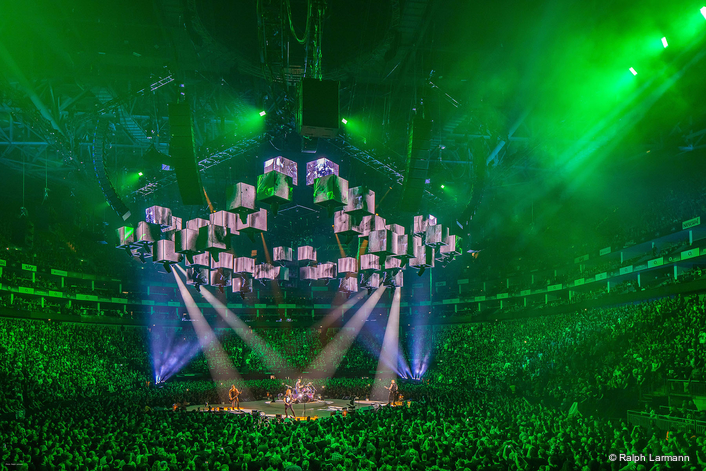 His enthusiasm is infectious and he’s been a big fan of the band since he was a kid – they were formed in 1981 by drummer Lars Ulrich and vocalist/guitarist James Hetfield – proving that big dreams really can come true!
He primarily works in the concert touring sector also as a lighting programmer as well as a designer, and is celebrating his 21st year as an industry professional.

The career path has been a bit serendipitous after he classically trained as a pianist and has indulged a passion for the drums since 9 years old, so a sense of rhythm is clearly in the DNA!

Rob originally studied in Florida to be a studio audio engineer, then started doing live sound and was lured to a sound and lighting rental company where he discovered his passion for lighting.