Robe BMFLs Out On a Limb with Steven Tyler 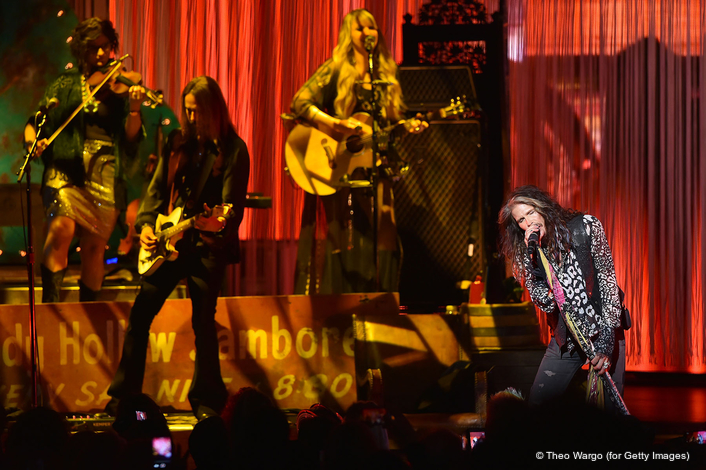 Lighting the show was LD Nathan Alves, who used 12 x Robe BMFL Spots to produce most of the major signature looks.

It was Nathan’s first work with Tyler and the focus was on emphasizing the intimate environment and the delicate subject matter inspiring Janie’s Fund and the launch concert. So all the production was centered around the star as he related the narrative of who he is and his personal journey to where he is now.

It was completely different from a standard rock show.

“Everything I did lighting-wise was designed to be unobtrusive – hiding the technology and highlighting Steven,” explained Nathan.

He worked with creative director Jeri Slaughter and art director / set designer Zeya Maurer and was involved in most of the show’s video elements in addition to lighting.  He’s always believed that lighting and video should “play in the same sandbox” and be complimentary to the overall visuality of a performance.

The BMFL Spots – supplied by VER – were positioned on the house fly bars and used as down and backlights on the set structure.

Nathan first used BMFLs on a leg of the Barry Manilow “One Last Time” tour in 2015, when he was working as lighting director / operator for LD Seth Jackson.

“BMFLs really proved themselves to me on that, so I have been using them on designs ever since,” he explained.

He likes the crisp, clean well-defined beam of the BMFL and the quality of the light. “It was a perfect back-light fixture for this show and I also used them as band specials,” he commented, observing that the BMFLs also looked great without any haze, which is one of the challenges of working in this venue.

Nathan thinks Robe is making big strides in the US touring market at the moment. He’s seen the products in action for several years on overseas shows and said it’s nice to see them taking off a bit here at home. As a company Robe seems to be really interested in listening and perfecting their product line - you can’t ask for more than that from a manufacturer!”

Production manager for the ‘Out On a Limb’ special show was Chris Adamson, and there is talk of a tour to follow.

Steven Tyler co-wrote the Grammy award winning “Janie’s Got a Gun” with Aerosmith bassist Tom Hamilton in 1989 about a girl’s revenge on her sexually abusive father.

His own statement said he intends to “leave behind something else in this crazy world along with my music” through activities with Janie’s Fund in partnership with Youth Villages – a non-profit organization dedicated to assisting troubled children and their families.

Tyler’s much anticipated first solo album is expected this summer.