Robe and the Guus Meeuwis Experience 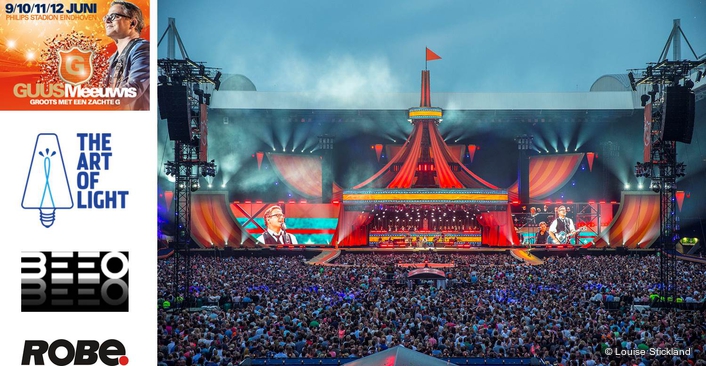 Three hundred and sixty Robe moving lights caught the action at the Philips Stadion in Eindhoven for four sold out concerts by Dutch singer, songwriter and superstar Guus Meeuwis, part of an eye-catching lighting spectacular designed by Marco Driessen from creative lighting and visual design practice, The Art of Light.

Meeuwis plays multiple shows at the 34,000 stadium around about the same time each year. It is home to the Philips Sport Vereniging (PSV) football team of which he’s a keen supporter, and there is a completely unique look and feel to the stage year-on-year, originated by set designer Ronald van den Bersselaar of BEEO.

This years’ theme featured a carnavalesque appearance based on the famous orange flag for Netherlands which was recreated using a combination of scenic and LED elements.

Marco has worked with the artist for 16 years and, just over a year ago, joined The Art of Light, known for innovation and flair. 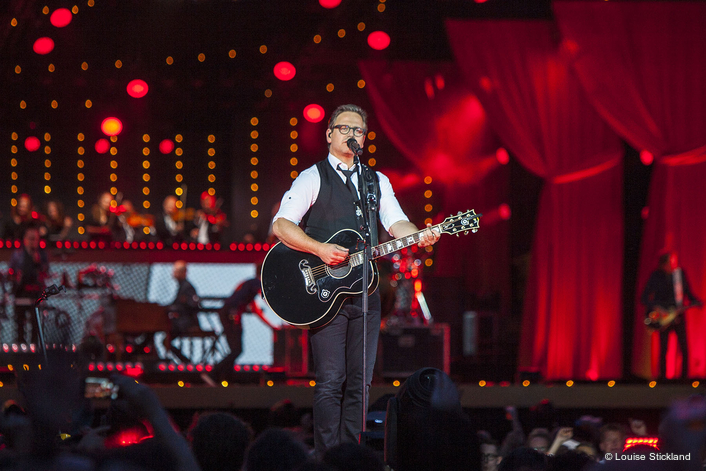 These shows are always a vibrant fusion of ideas and input from Guus, Ronald, Marco, musical director Jan Willem Roozenboom, show director Marcel de Vré, the audio team and Guus Meeuwis’ management, and right at the heart of the show presentation is the goal to delight and entertain the audiences.

One of the recent production trademarks is a runway circumnavigating the entire field of play, allowing Meeuwis to get right in amongst his fans.

Lighting the set was obviously a massive part of the experience - although for a stadium gig, it was not a huge lighting rig in fixture numbers. Another big consideration was lighting a large number of people onstage including an 8 piece electronic band and an 18-piece orchestra. 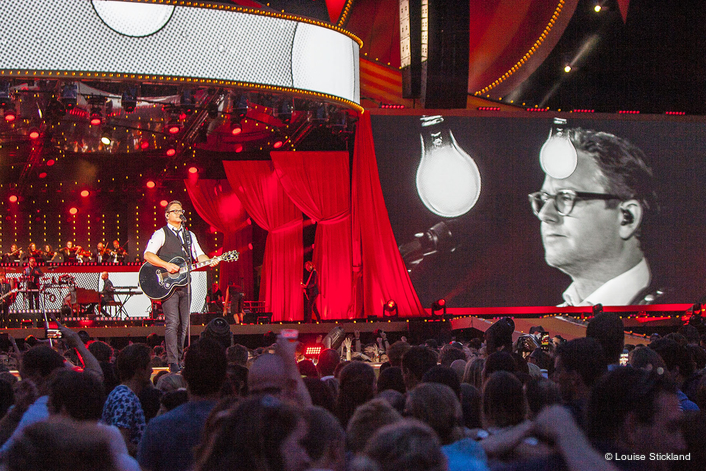 Thirty-two of the 66 LEDWash 300s were installed in the low roof above the band area onstage … their small size making them perfect for the job.

Thirty-six BMFL WashBeams were rigged around the top levels of the set. It was the first time Marco had used Robe’s BMFL WashBeams on one of his shows, and he commented, “They are powerful with a great zoom and good colours in the colour wheel, its fast and also the blades are a great feature in this fixture  … I think it’s overall a very ‘complete’ product”.

The thirty seventh BMFL WashBeam was used in follow spot mode in the mid-stage roof. 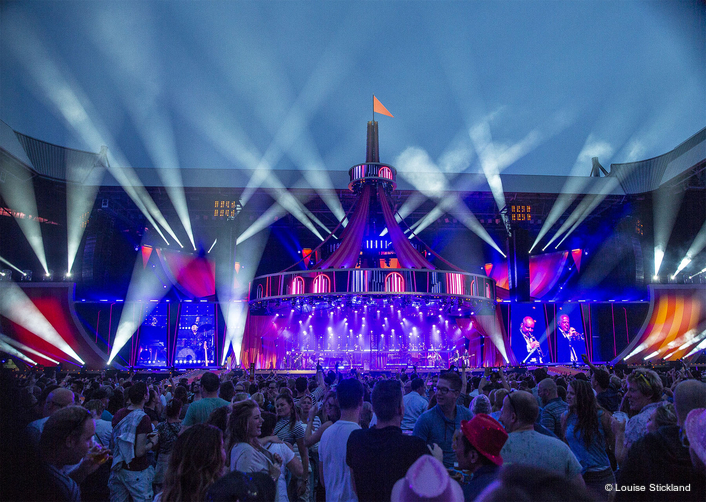 Twenty-two BMFL Blades were dotted around the stadium stand roofs, along the back of the central circular section of the stage and on the PA delay towers and used to highlight the detailed set décor which looked amazing!

Marco was very satisfied with their output given the throw distances of between 25 - 85 metres!

There were 107 Pointes on the rig of which 48 were positioned along the walkway around the arena floor, with six on the B-stage at the front, 15 in the towers filling the spaces in between the curves of the different set flags, 12 behind the band, 8 on the risers and the rest scattered around the over-stage trusses. 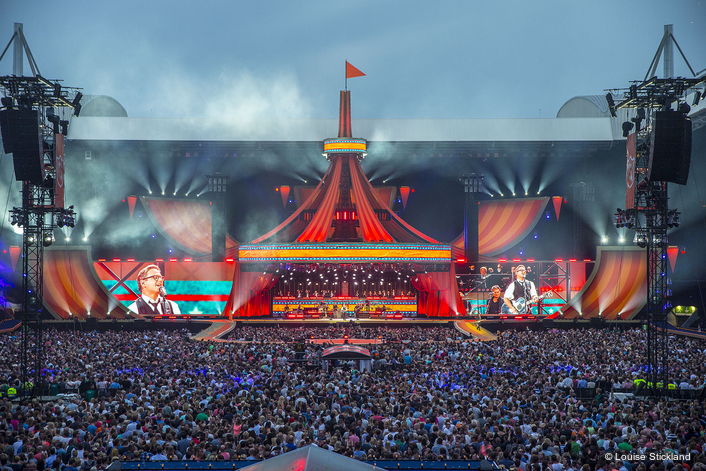 “I love Pointes,” says Marco, “They are compact, punchy and small and perfect as a beam or a spot”.

The 117 LEDWash 800s were rigged all over the roof structure and stage trusses and used for creating base washes and lighting the whole environment – stage and audience. Ensuring that the show was colourful and fast moving was very much part of the Guus Meeuwis live aesthetic.

Eight LEDBeam 1000s were used as specials for picking out the set flags and last but not at all least on the Robe front … three PATT 2013s onstage were fitted with customised covers  in the shape of the stylised Guus Meeuwis ‘G’.

All lighting equipment was supplied by Utrecht based Ampco Flashlight Rentals, brought in by Sightline Productions who co-ordinated all the technical elements for end client, promoters Modestus Management & Concerts. 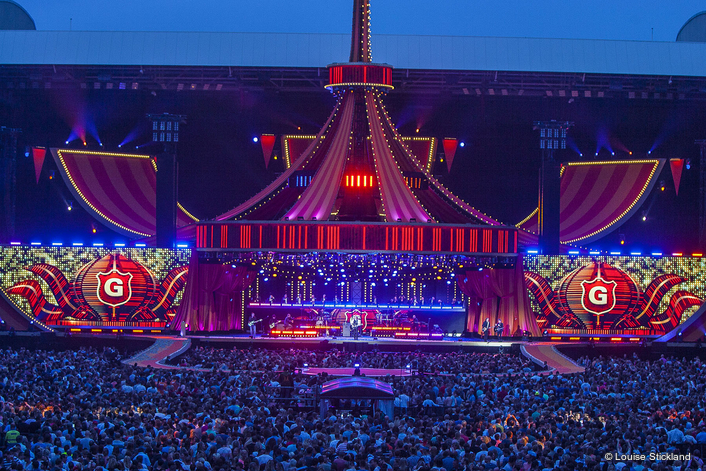 Marco was able to WYG a considerable amount of the show in the days immediately prior to the get-in and during the build, which was invaluable in helping to go into the onsite programming period with several key building blocks already in place, allowing them to fine tune and spend that time very efficiently once they were handed the rig.

Art of Light’s Andre Beekmans assisted on the programming and operating.

The shows started in daylight and transitioned through dusk into the night so another major challenge for lighting was to ensure that lighting and video was seamless and balanced throughout the process.

Marco has used Robe products regularly for the last few years and comments, “As manufacturers, they are doing a great job of listening to LDs and also designing and making excellent fixtures that are very creative, powerful and well-priced. I love them!”

A Party with a Capital “P”: grandMA2 celebrate with Guus Meeuwis
Robert Juliat Lancelot and Aramis Party in the Netherlands
Robe Embraces Armin