For Ricky Martin’s monitor engineer, Steve May, DiGiCo consoles hold two big advantages: their I/O capacity - which means he never worries about running out of inputs or outputs - and the ability to switch seamlessly between consoles in the range. Both have made life easier as he and Front of House engineer Chris ‘Privet’ Hedge travel round Spain and Portugal on the current leg of Ricky Martin’s tour.

Running from the 22nd of May to the 11th of June, the tour has taken in many of the major cities in Spain, including Madrid, Granada, Valencia, Seville, Barcelona, as well as the Portuguese capital of Lisbon, and finishes in Bilbao. Three rental companies are supplying equipment, with PRG Spain and Llusovi each handling six shows and Fluge two. The equipment inventory varies from company to company and although Steve specifies an SD7, depending on availability, he has used both this and an SD5 as his monitor console, whilst Privet has been able to use his preferred SD10 throughout.

“I’ve been using DiGiCo consoles pretty much continually for the past 10 years,” says Steve. “I like the way racks work, the sonic quality of the consoles and the way the inputs and outputs work - you can put channels anywhere you want to on the board.

“I originally specified the SD7 for Ricky because of the number of inputs and outputs it has available. As well as touring, he’s been a judge on the Spanish, Mexican and Australian versions of The Voice, so it’s really useful to have enough capacity to leave scope for guests on the show. 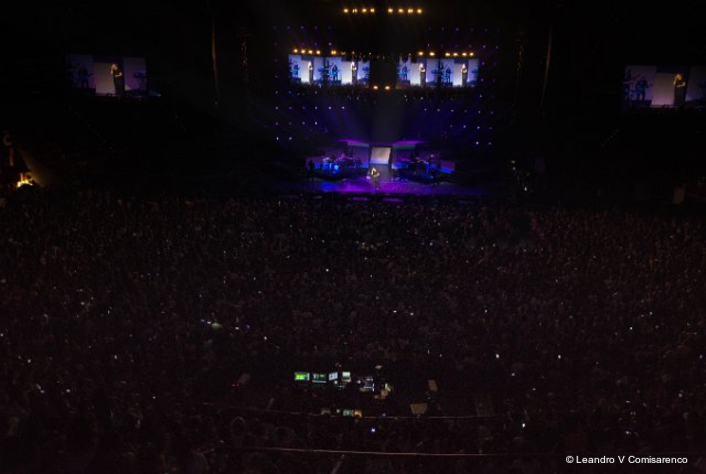 In general, Steve has around 95 inputs and 64 outputs that include vocals – both main and backing - drums, guitars, bass, percussion and keyboards, as well as effects, his Pro Tools rig, and comms. He uses no outboard effects, relying solely on those onboard the console.

“There isn’t much rehearsal on this tour, so having a familiar board is always a big help,” he continues. “Ricky likes to do duets with guest artists. Sometimes it happens, sometimes it doesn’t, but you can guarantee that if I didn’t allocate the channels, it would. That’s another reason why the capacity of the console is important.

“I always try to keep things as simple as possible, because when you swap between consoles it makes things less complicated. When you’re using the software to convert from one console to anther – in this case the SD7 to the SD5 - and you have to take channels off, there are always bits you forget to do, so I try to reduce the risk of that happening to a minimum. However, this isn’t a complicated show, so I don’t have masses of cues.”

Each show is recorded using via a DiGiGridM recording interface, with the video and Pro Tools engineers taking an audio recording from Privet, allowing them to add videos to Ricky’s website and social media sites.

In terms of wear and tear on equipment, the tour has been gruelling, with bad roads between venues and dusty bull rings on the itinerary.

“The equipment is all really good and has performed extremely well, but the climate alone has taken its toll,” says Steve. “All the rental companies are great though, and anything that needs replacing gets replaced. I’ve also had a bit help from DiGiCo due to a network problem. Having a direct line to people I know and being able to talk it through on the phone is invaluable.”