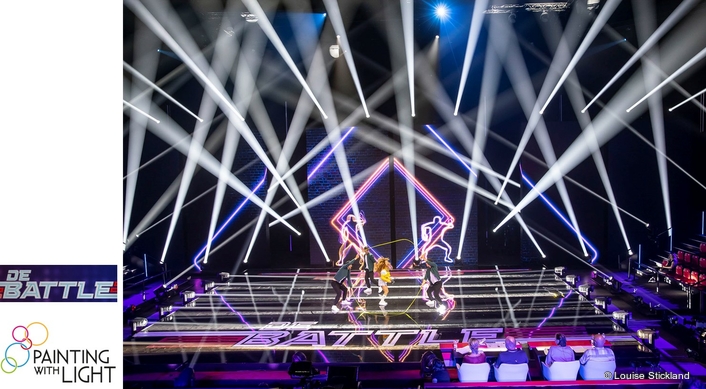 Painting with Light (PWL), working for television producers Dedsit, supplied lighting and video content design, creation and control for “De Battle” – a co-production between Belgium’s SBS and Netherlands broadcaster, RTL – which was recorded at the Pop Up Theatre in Puurs.
This pacey new all-action ‘challenge’ Belgian / Netherlands TV series is billed as “the next level of studio entertainment”.

Four celebrity contestants, divided into two Belgian and Dutch teams faced brain-teasing quizzes, gravity-defying stunts – from drifting cars to traversing a high wire plus a host of manual dexterity and physical exercise skill tasks – testing them to the max in front of a live audience. 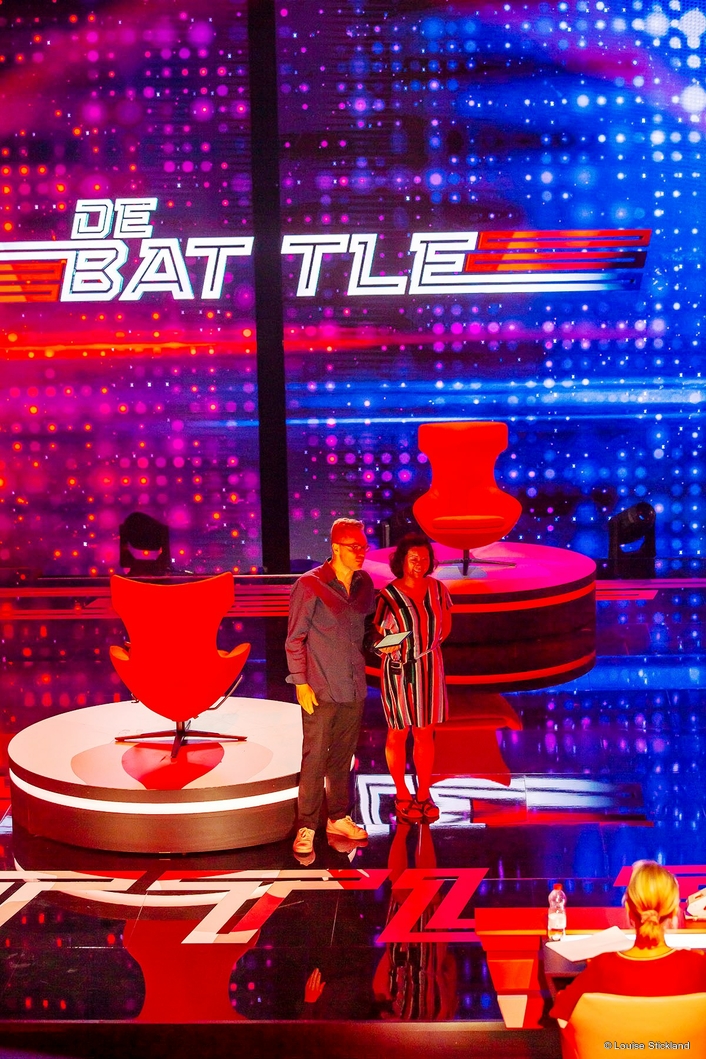 Studio 100’s Pop Up Theatre was chosen as one of the largest and most flexible studio / performance spaces in the country which comes complete with unique production facilities, including eight moving seating tribunes to fit 1600 people and eight remote-controlled LED screens which can be moved into any position and configuration.

These large moving assets enabled the production team to build the multiple locations needed within the venue to stage the different challenges. The speed at which these turnarounds were possible enabled series director Kevin Houben to achieve the results he needed for all four episodes that were recorded during two intense weeks.
PWL’s creative director Luc Peumans designed lighting for each different scenario, utilising the substantial ‘house’ lighting rig in the Pop Up Theatre (also home of the 40-45 musical spectacular, as a base, and adding around 140 moving lights).

Luc’s extensive experience as a lighting and visual designer in television and theatre was a huge asset to the production as was his ability to think ‘out-of-the-box’.
Kevin Houben initially produced a mood board for each act / challenge and location. The series logo, which was prominent in the video artwork, was originated and styled by the creative team at SBS.
Luc took these two elements as his starting points and started the lighting process and briefed the video content creators accordingly. 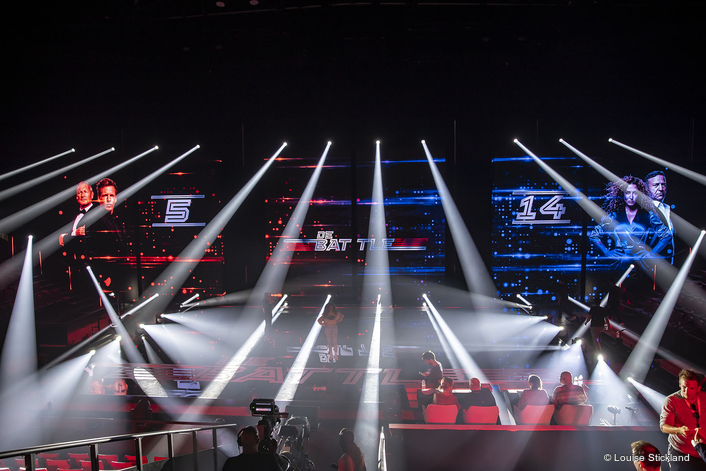 The challenge on site for the technical team was getting the changeovers completed smoothly and in some very short operational windows, which involved moving the screens, the tribunes with the audience and the lighting positions which changed dramatically as the 3D space for each challenge shifted.
“We basically needed to be as flexible as possible on all fronts,” explained Luc, “as well as leaving a bit of contingency for ‘unknowns’ which frequently presented themselves when working in these dynamic spaces as we were developing the scenes.” 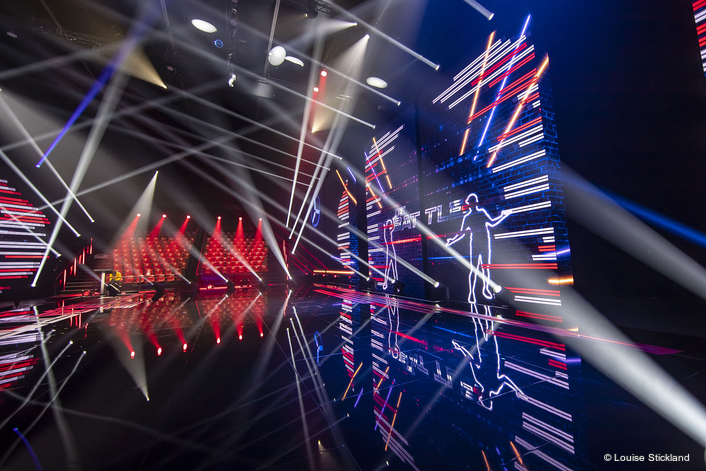 Luckily PWL got a good ‘head start’ on everything by pre-visualising all the lighting and video content and doing this in relation to the different camera and audience positions. The screen shots from WYSIWYG were shared with the whole production team so tweaks could be discussed and implemented at this stage.
This way, everyone came into the studio during the recording period well prepared and ahead of the game. 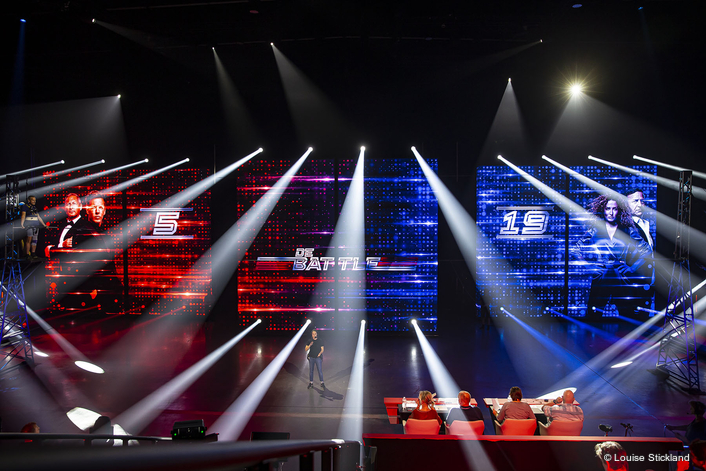 This saved a huge amount of time, both creatively, as everyone had a very good idea of how things looked, and physically, for camera, screen and lighting positions and the knock-on effect in terms of cabling, etc., which could also be prepped in advance, all saving that valuable ‘live’ time.
The additional lighting fixtures were 125 x Icon Stage hybrid beam / spot / wash luminaires from PRG Belgium who also supply the venue house rig, plus 96 x GLP Impression X4s and XL LED washes.

The vast majority of these were deployed on the floor, on the screen wagons, on the bleacher seating, etc., only 24 extra lights were hung in the grid.
Luc utilised six PRG Best Boys as follow spots, operated remotely via a ground Control system.
A grandMA full size console was used for lighting control – running with fully redundant backup – and a third mobile console which was used to position fixtures in other areas whilst programming continued for the current area.  Programming was an exacting task on site co-ordinated by PWL regular, Niels Huybrechts. The positional pre-programming was done by Céline Cuypers.

The imaginative task for Luc was crafting different atmospheres for each challenge using the same lights, from stark industrial looks needed for the tasks operating an industrial crane to the cool clubby break-dancing vibes of the speed rope skipping challenge!
Diversity was definitely the order of the day!
Lighting also had to be related to the screen content, and through the visualisation, a lot of cue tweaking was done in advance to ensure the two media complemented one another.
“You need to keep many settings very clearly in your head working on a show like this,” says Luc, “there is only one time slot to get it right, so it’s as pressured and ‘near live’ as it gets!” 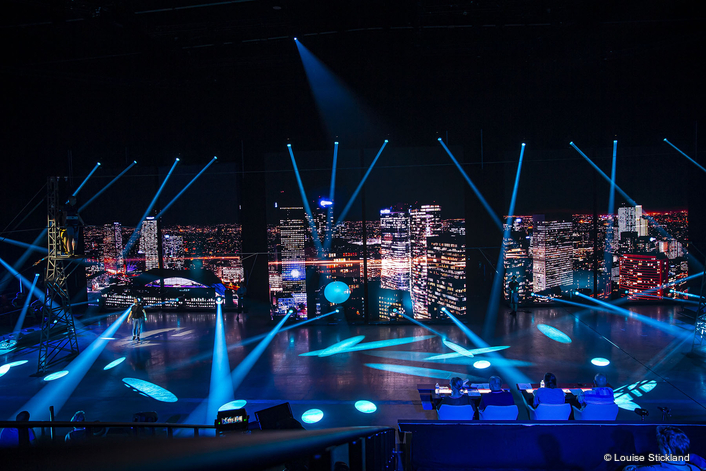 Co-ordinating visuals and running PWL’s 10 x d3 video servers on site was Tommie Kidjemet, with all the advance video programming undertaken by PWL’s Katleen Selleslagh.
PWL commissioned Bart Tauwenberg from New Solid to produce the video content under Luc’s direction.
Over the course of the two-week shoot period, all the venue’s remote moving LED video screens were used. These each measure 7 metres high and 4.5 metres wide and each has its own onboard d3 server (which are networked). Different quantities of screens were used in different formats for each of the show challenges.

The fact that these and the audience tribunes could be moved was essential in delivering the series in this short timeframe, achieving the complex changeovers and ensuring each scene was aesthetically dynamic and met everyone’s expectations.
Tommie used the Christie Pandora’s Box Widget Designer in combination with the d3 to insert live video effects at certain points in specific scenes – gaming computer style! In one quiz-based challenge, the right content had to be onscreen instantly as the contestants answered – for which he was cued by the director. At other times faces had to be quickly put up onscreen, so this all took special co-ordination and alertness!

As well as playback video related to the challenges / tasks,  inserts of the contestants training for some of these were shown at specific times, synched to audio, and some of the lighting cues – related to win / lose moments – were executed by the grandMA MIDI triggered from content on the d3s.
For Painting with Light, “The Battle” was a great opportunity to demonstrate coherent visual teamwork, continuity, imagination and the combination of technical and creative skills that define the multidisciplinary approach of the company. “We are all very proud of working with the Dedsit crew and being part of something that’s exciting and ground-breaking in terms of television,” concluded Luc.

About Painting with Light
Founded in 1999 by CEO Luc Peumans, Painting with Light is headquartered in Genk, Belgium. The innovative lighting, video and visual design studio has roots in live entertainment, concerts and broadcasting. The company is currently active in entertainment and leisure markets plus retail and architectural. A specialist team is also dedicated to designing and applying advanced lighting and video techniques for creating compelling stories and visual experiences.

PWL has empowered dark rides with smart lighting including multiple-awarded Basyliszek in Legendia, Poland and Popcorn Revenge at Walibi Belgium. Other projects include the Comics Station and Plopsaland attractions in Belgium, the Netherlands and Poland.
The company’s unique flair for imagination and thinking out-of-the-box has helped imagine a host of lighting and video designs for musical spectaculars, concerts and festivals, football arenas, monuments, art works and cool buildings worldwide.