Held at Petco Park in San Diego during Comic-Con International, the 2015 MTV Fandom Awards were hosted by Bella Thorne and Tyler Posey, with performances by pop artists including Flo Rida and All Time Low. The stage was set up in the “Park at the Park” area of Petco Park—a large open area behind the stadium’s center field wall.

Later in the summer, hip-hop artist Nelly performed a concert at the same venue, with Mastermind there to deliver a high-impact PA system featuring six ground-stacked V20 loudspeakers per side over three S25 subwoofers per side in a cardioid configuration, with eight S28 subwoofers in the center. Crown I-Tech 4x3500HD amplifiers powered the V20 and S25 boxes, while I-Tech 12000HD amps powered the S28 subs.

Having purchased the VTX components a little over a year ago, Mastermind has delivered consistent, world-class sound for a variety of productions. “The size versus power output is great, the high end is nice and smooth and we get a lot of punch out of the system,” said Chad Griswold, Owner of Mastermind Production Group Inc.

In addition, Griswold has found the simple and flexible rigging of the VTX system to be a significant advantage. “At the MTV Fandom Awards, we modeled the system based off the information we were given, but the stage setup changed a bit when we were setting up,” Griswold noted. “However, it was very easy to modify the angles on the array while it was suspended—we didn’t have to take any of the loudspeakers down to make the necessary changes.” 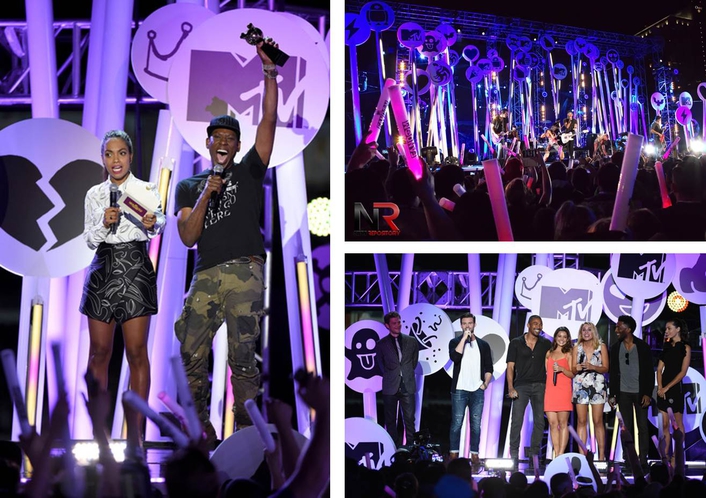 Held at Petco Park in San Diego during Comic-Con International, the 2015 MTV Fandom Awards were hosted by Bella Thorne and Tyler Posey

In addition, Griswold found the I-Tech 4x3500HD amplifiers to be a perfect complement to the system. “Crown has been great with I-Tech HD, utilizing the built in presets for the boxes has proven to be a reliable and stable platform when used in conjunction with the VTX systems and beyond” he said. “The fact that I have four channels of high-power amplification in two rack spaces with full DSP is great.”

Ultimately, Griswold noted that the purchase of the VTX line arrays and I-Tech HD amplifiers ties in with Mastermind’s company philosophy. “We try to treat our clients with the best service possible and make a point of having really high-quality gear, and we aim to uphold that reputation,” he said. “I’m looking forward to getting the system out there for more and more events. A lot of people have the perception that bigger is always better, but these V20 boxes pack a lot of punch.”

HARMAN designs and engineers connected products and solutions for automakers, consumers and enterprises worldwide, including connected car systems; audio and visual products, enterprise automation solutions; and connected services. With leading brands including AKG®, Harman Kardon®, Infinity®, JBL®, Lexicon®, Mark Levinson® and Revel®, HARMAN is admired by audiophiles, musicians and the entertainment venues where they perform around the world. More than 25 million automobiles on the road today are equipped with HARMAN audio and connected car systems. The Company's software services power billions of mobile devices and systems that are connected, integrated and secure across all platforms, from work and home to car and mobile. HARMAN has a workforce of approximately 27,000 people across the Americas, Europe, and Asia and reported sales of $6.2 billion during the 12 months ended June 30, 2015.