Crosby, Stills and Nash Hit the Road With JBL and and Crown 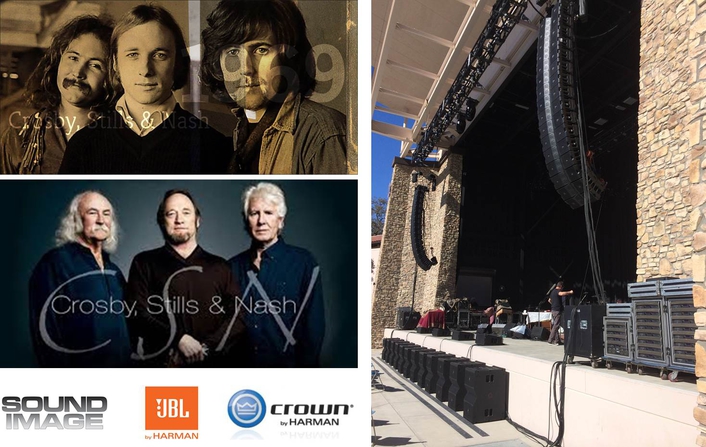 .
When Crosby, Stills and Nash first started singing together in 1968, they immediately knew they had something special in their distinctive blend of soaring vocal harmonies and hybrid folk-rock musical style. In 2014 they are still going strong, having recently completed a nationwide tour performing career-spanning hits and new songs. For the 2014 tour, CSN’s live sound company Sound Image upped the performance of its tour sound rig using HARMAN’s JBL flagship VTX line arrays and latest-generation Crown I-Tech HD Series amplifiers.

For every venue on the tour, Escondido, California-based Sound Image used a combination of JBL V20 line array elements and S25 suspendable, cardioid-arrayable subwoofers. “Typical CSN concert venues vary between sheds in the summer and theaters with a balcony,” noted Gary Sanguinet of Sound Image’s touring division. “Based on the size of the theater, on each side of the stage we hung a split array of six V20 loudspeakers, one or two S25 subs, and six more V20 boxes on the bottom of each hang, and then placed anywhere from six to eight additional S25 subs on the ground for additional low-frequency reinforcement.”

All the loudspeakers and subwoofers were driven with 48 of Crown’s flagship I-Tech 12000HD amplifiers. The 2014 tour marked the first time Sanguinet and Sound Image’s front of house engineer Kevin Madigan used the VTX line arrays and JBL HiQnet Performance Manager™ setup and system calibration software. For the first few tour dates Sanguinet and Madigan worked with Paul Bauman and Eric Friedlander of JBL to dial in and finalize some of the system’s settings. “The I-Tech HD Series amps have internal processing and presets that are specifically designed for use with JBL VTX line arrays and I have to say the amps work really well with these boxes,” noted Sanguinet. “It took us a couple of shows to dial in the ‘comfortable’ EQ settings but once we did we found we had to change the settings very little from room to room and they were pretty minor changes at that.”

Sanguinet and his crew found the JBL VTX/Crown I-Tech HD rig easier to set up not only because the VTX arrays and I-Tech HD amps work in synergy but also because the loudspeakers are lighter in weight than other line arrays. “With the VTX arrays, Sound Image can put up as much PA as they want, regardless of whether the installation calls for only one point per side or more,” Sanguinet remarked and he also found Performance Manager’s modeling capability to be extremely helpful in determining the installation parameters, speeding up the setup process considerably. 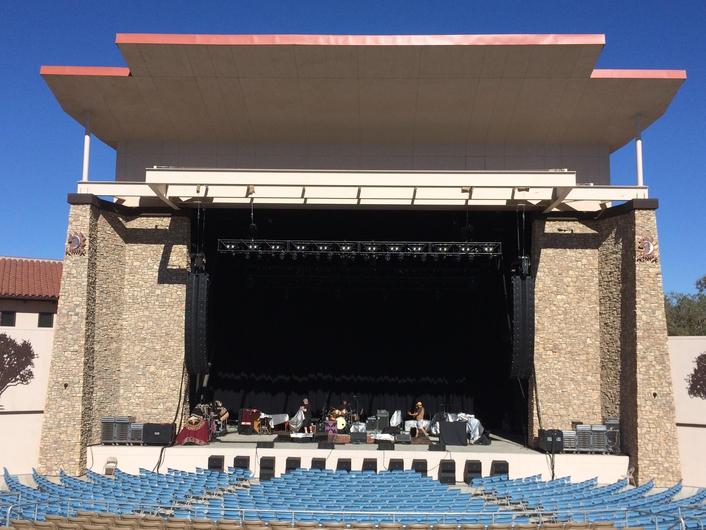 It’s no secret to say that for CSN the most important attribute of the live sound rig is getting CSN’s voices exactly right. For Madigan, who has been working with CSN for five years, that means a very coherent system that has wide, even, linear frequency response with the ability to deliver clean, punchy vocals. “CSN’s vocals are iconic at this point. Other people could try to sing those notes but only CSN sound like they do, so the harmonies are CSN’s signature and they dictate how the system has to sound,” he said.

Madigan is extremely impressed with the D2 dual-diaphragm high-frequency compression driver in the JBL V20. “The definition and detail are really impressive and bring out the character and distinctive timbre of Crosby, Stills and Nash’s voices to a degree I’ve never heard before in a live sound situation. With the vocal blend so predominantly important, the clarity and intelligibility of this system was a huge part of the success we had on this tour.”

Madigan also credits the talent and professionalism of CSN’s backing band and their techs. “I’m often asked how I get such a great drum or acoustic guitar sound and I’m halfway embarrassed to say I don’t. OK, I’m very careful about mics, DI’s, EQ, dynamics and effects, but I’m working with a top-notch backing band and they and their techs give me such good sounds to work with that I can pretty much take what they give me, run it through the PA and adjust the levels as needed during the show.”

For Madigan it’s ultimately not just about having a “good ear” – he feels that in order to mix Crosby, Stills and Nash properly the person behind the board has to be aware of the musical heritage of the group, what they expect and what their fans expect. “The vocals are far and away the most important part of mixing the show and take the majority of my attention. Everything else is built around that. Having a PA that’s perfectly tuned and exceptional sounding makes mixing much easier. The ability of the Crown I-Tech HD amps to be optimized with the VTX arrays gives me the assurance that the system is always working at optimum performance.”

Madigan concluded, “We’re giving Crosby, Stills and Nash and their audiences the best sound I’ve ever heard from a live sound rig. For a vocally-oriented group like CSN, the clarity and natural, effortless quality this system provides is a match made in heaven.”