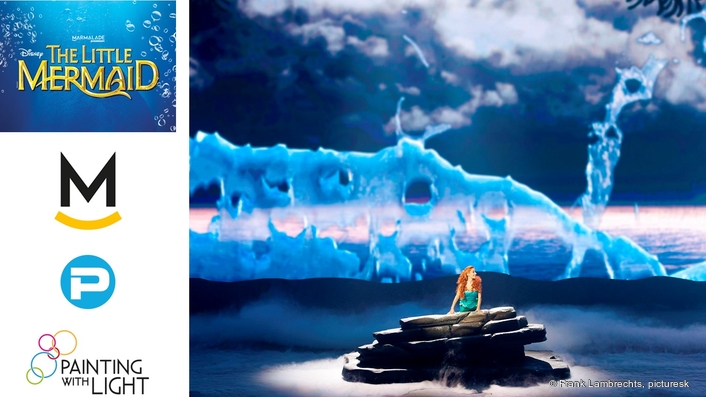 Luc Peumans and the team from Painting with Light created a dramatic lighting design and supplied media servers for a large-scale production of Disney’s “The Little Mermaid” staged by Marmalade Content at Flanders Expo in Ghent, Belgium. Luc had worked in the same role on Marmalade’s 2016 ‘Beauty and the Beast’ production  and was delighted to be reunited with set designer Stefan Haudenhuyse and director Frank Van Laecke, with whom he collaborated on 14-18, a Spectacular Musical. The technical Director was Bart De Coensel from The Production Box.

The creative process began with a brain-storming session between Luc and the producers, Frank and Stefan, from which this basic aesthetic framework emerged and Luc started to develop the lighting concepts.

An underlining theme was to make it properly ‘spectacular’ in both impact and presence, so the audience would become fully immersed in the action. “I basically wanted to bring an ‘epic’ feel to it,” explained Luc. “This was the approach needed with a 40 metre wide stage and vast upstage LED screen, all vital to setting the scene”.

Luc also wanted to ensure that there was a clear demarcation between the two worlds: above and under water. He referred to past Little Mermaid productions – including black-light production that he had lit some years back – where the underwater sections are often interpreted as dark and moody.

However, for this production he wanted the underwater scenes to be bright and magical – thriving and full of positive energy.

A network of trusses was installed into the roof of Hall 8 of the Flanders Expo event centre.

Upstage, Luc positioned 24 x Robe BMFL Spot fixtures, chosen for their power and precision, eight each rigged across three trusses, and these were used to extend the effect of the digital scenery, projecting gobos and texturing down onto the upstage scenic elements and across the stage.

The main hard edged fixtures on the lighting plot were Martin MAC Vipers which were used for all the key lighting and specials, positioned on three different levels at the front and advanced trusses.

Thirty-six MAC Viper Performances were attached to side-stage ladders, 18 per side, where they were ideally positioned for strong cross lighting. Again, they were picked for their intensity with the substantial throw distances.

Thirty-two Viper profiles across several trusses illuminated the 3D scenic structures in front of the LED wall, styled on coral and other sea-bed rock formations.

Luc was keen to heighten the excitement by utilising ‘surface water’ lighting effects – the shimmering, piercing rays you see when actually underwater and staring up at the surface. 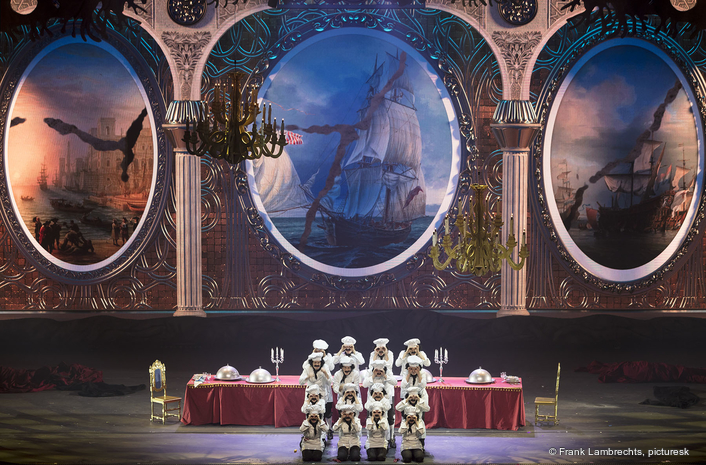 “They have an ephemeral, ever changing and very distinctive quality – something that is transient, fluid and fascinatingly desirable”, he described, and to achieve this look, he designed some custom lighting pods.

Each of the 14 pods contained seven URC Ledzoom 210 fixtures and four Robe Pointes, which could be used as highly versatile, really BIG lightsources in fixed positions over the stage.

The luminaires could be zoomed out extremely wide or right in, producing tight pin-beams. Either way, they worked as excellent above-water sources for the ocean scenes.

Interesting combinations were possible by combining the URC Ledzooms in one colour and the Pointes in a complimentary or contrasting one. They enabled Luc to shift the direction of the light going into the water, and could also be used as back-light when needed. 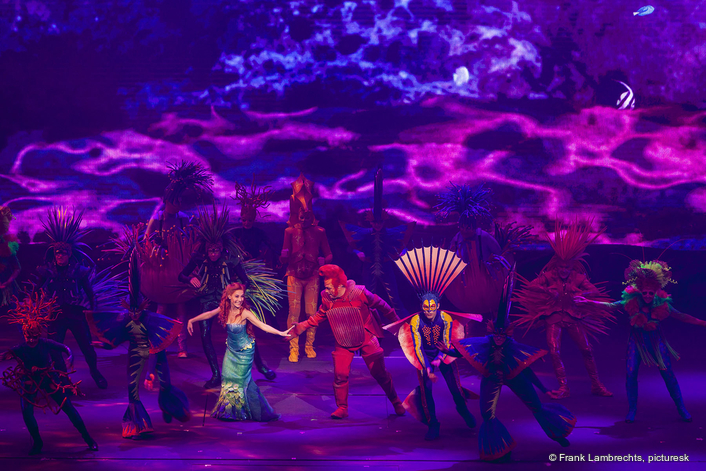 Luc lit a 40 metre wide water curtain with 72 x URC Power LED strips on the downstage edge of the stage. This was a vehicle of visual trickery, bringing the shipwreck scene alive, complete with harsh strobes and thunderous sound FX.

This brought huge adaptability in terms of which fixtures could be used for which performers, so Luc could get extremely accurate follow spotting with the highlights literally just on the artists, without the large areas of light spillage often associated with more traditional follow spotting.

In the scene where Ariel flew (‘swam’ to be precise) from the stage to FOH, Luc was able to use two of the side BMFL Blade follow spots tightly shuttered to create a narrow letterbox shaft of light which followed her trajectory and also concealed much of the flying wires ramping up the drama! 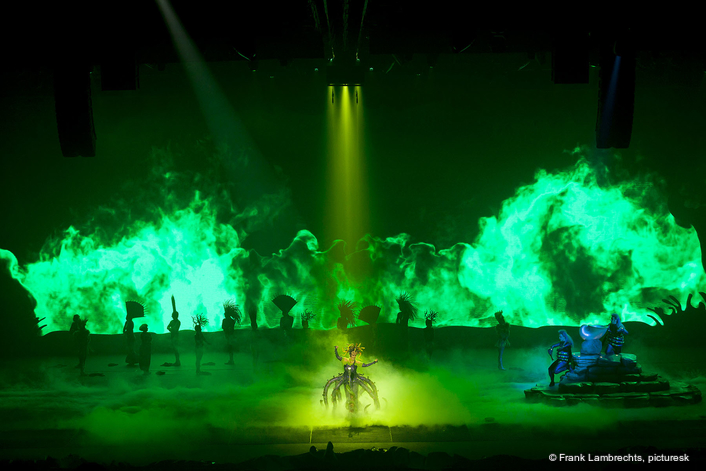 Using the RoboSpot system also enabled background lighting to be matched with a greater range of complimentary colours, and in addition to all these advantages, the thrill of using new technology successfully is always rewarding.

Lighting was run on a grandMA2 console programmed by Niels Huybrechts and operated by Jochen Kerkhofs for the run of shows.

Video was programmed by Mark Honsbeek and played back via one of Painting with Light’s disguise gx2 media servers, triggered by timecode from the grandMA2.

Five big bubble machines and eight small ones were positioned above the audience to fill the room with thousands of undersea bubbles. 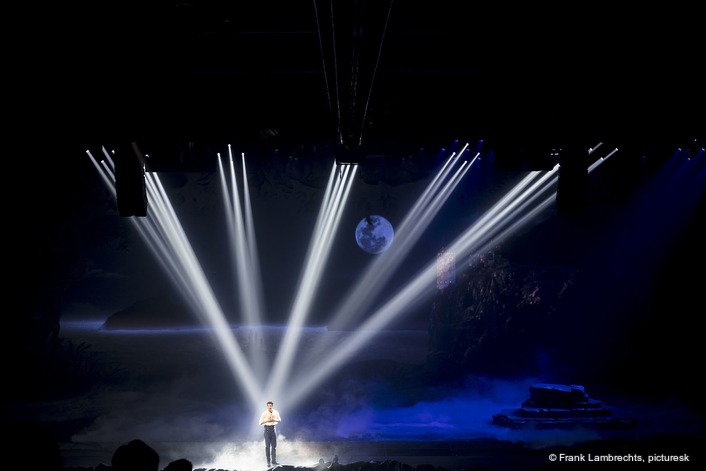 The production presented many challenges for lighting, and the time in which to bring this complex and technically ambitious production together was quite tight.

There was a decent sized rig in the roof, and this was needed to bring the focus to the right places across the wide performance space, and to craft that fine balance between what needs to be lit and what doesn’t … to evoke precisely the right atmosphere.

“I was very conscious to try and make the audience really feel like they were either under or above the water” commented Luc, which, judging by reviews and many positive comments, was a big success.

The period between the start of the get-in and press night was 20 days. Once lighting and all other technical elements, including automation systems installed by WIcreations, were in place, four days of ‘dry’ tech rehearsals without the cast were followed by 6 days of full tech with cast onstage, with only four dress rehearsals … then opening night.

Luc commented, “We all really enjoyed working on another beautifully detailed show from Marmalade, where production values were high on the agenda. There was a fantastic team in place and an excellent vibe … which mirrored the enthusiasm and popularity of the production with the public!