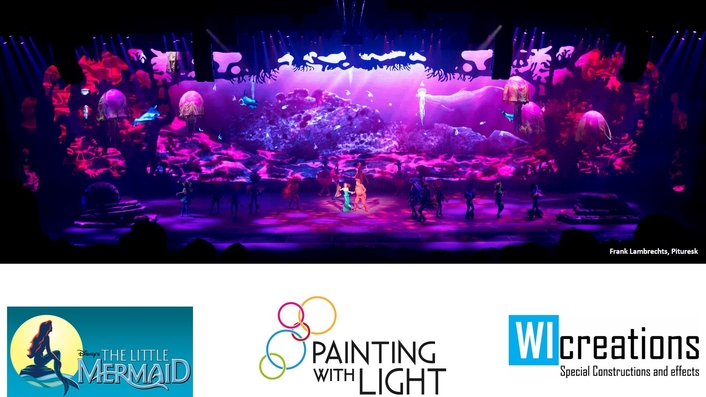 Entertainment engineering specialists WIcreations supplied flying – both people and objects – and stage automation equipment, expertise and crew to the recent Marmalade production of Disney’s ”The Little Mermaid”, staged in Halls 7 and 8 of the Ghent Expo in Belgium, which ran from the 17th of December until the 7th of January.

Directed by Frank van Laecke, this eye-catching original production with a detailed and intricate set design by Stefan Haudenhuyse was based on the 1989 animated musical fantasy film from Walt Disney Features, in turn inspired by the legendary Danish fairy tale by Hans Christian Andersen, first published in 1837.

Hans Willems project managed for WIcreations, who were asked to design and co-ordinate flying systems and stage automation having provided similar services for Marmalade’s 2016 production of another Disney musical, “Beauty and the Beast”.

Says Hans, “It was great to be asked back by Marmalade for the second year and to work with Technical Manager Bart de Coensel and his team again. Marmalade is a client that fully understands the benefits of investing in the production to deliver the best possible live experiences to their audiences, and we were happy to offer our knowledge, reputation for safety and also contribute our own ideas on potential staging solutions”.

WI supplied all the equipment needed for the lifting and flying tasks from its rental stock, also making it cost-efficient and safe.

Centre stage, one of WI’s TP02 lifts was positioned below the stage and used to bring Ursula, the main antagonist, onstage.

Twelve WI-BAND Hoists were rigged on various trusses in the roof and used to bring assorted props and scenic pieces in and out throughout the performance. These helped change the atmosphere, mood and location of the scenes.

The WI-BAND is a new product ideal for applications like this - the vertical motion of props - where no dedicated house fly-bar or winch system is in place in the venue.

Smooth and near silent operation is offered through smart design that minimises the moving parts, offering another huge advantage for theatrical applications or any noise-critical scenario.

WI-BAND is constructed to WIcreations’ renowned standards of robust quality engineering. It’s different from other winches in that the hoisting cable is a flat steel band that coils up very expediently inside the winch … dramatically reducing the external dimensions of the device. With all the required drives and power supplies inbuilt, the WI-BAND also brings plug-and-play functionality.

For the people flying, WI installed five TP02 Winches and 60 metres of flying track in the ceiling between the stage and the FOH position, complete with a WI TP04 winch and double wire, which were utilized so that the main character  Ariel could “swim” from centre stage out over the audience to FOH.

Over the stage another personnel flying system was rigged with five TP02 winches positioned to fly 5 different characters during the underwater scene.

All the movement elements for the people and the stage lift were programmed and run by Pieter-Jan Nouwinck using one of WI’s bespoke 2D motion control systems.

Joining him and Hans on the WI crew for this production was Brecht “Bright” Moreels who specifically assisted with the people flying.

The main challenge, explained Hans was prepping and delivering the systems with a short lead time, however the fact that all the kit was available from stock at WI’s HQ in Heist-op-den-Berg benefitted everyone.

The show was a big success and Hans concluded, “We were also very pleased to be working alongside many other creative and technical talents whom we know and collaborate regularly”. In addition to director Frank and scenic designer Stephan, this also included lighting designer Luc Peumans from Painting with Light.