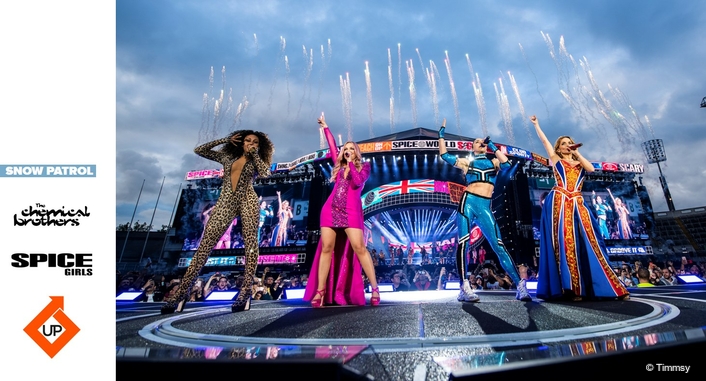 Universal Pixels provided video packages for Spice Girls in Dublin, Snow Patrol in Bangor, and The Chemical Brothers in London across an action-packed Spring Bank Holiday weekend. The video specialist supplied over 1,450m2 of LED screen, multiple 3G camera packages, disguise GX2 servers, and a total of 26 crew over the three shows.

When it comes to big shows like this, the devil is in the detail, explained Universal Pixel’s Phil Mercer: “We know from many years of experience in delivering large-scale shows and tours that pre-planning and the correct preparation before equipment and crew get onsite is fundamental. We pay close attention to each project and simplify things wherever we can, so that everything runs as smoothly as possible.”

Kicking off on Friday 24th May, the hotly anticipated Spice Girls comeback show at Dublin’s Croke Park welcomed an audience of 75,000 people. Universal Pixels worked with Creative Director Lee Lodge, Set Designer Jason Sherwood, Content Designer Kate Moross, and Video Director Jon Shrimpton to create the huge double-sided video ring in the centre of the stage, two large screens on the wings, and a header of video across the entire width of the stage, including the wings. All of this was achieved with over 700m2 of 5mm LED panels. The video specialist also supplied a 14 camera 3G PPU, Disguise GX2 servers, and 16 video crew.

The same evening, The Chemical Brothers’ stunning headline performance at All Points East Festival in London was enhanced with over 130m2 of ROE 18mm Vanish and two crew. Under the direction of Tour Manager James Baseley and Production Manager Toby Dennis, this was the first European show of the No Geography Tour.

Discussing a landmark weekend, Mercer said: “Each show has notable features. For The Chemical Brothers the transparency of the LED screen was well balanced with resolution and image quality. The seamless curved LED elements on Spice Girls worked out really well, and the moving LED roof pods for Snow Patrol were stunning. We’re really glad to be able to contribute in making these elements happen as per the original renders.’’

Considering the bigger picture, Mercer added: “We are definitely making progress. We've always aimed to be able to deliver multiple simultaneous large-scale projects to the highest standards. This weekend has set a very high standard for all of us at Universal Pixels.”