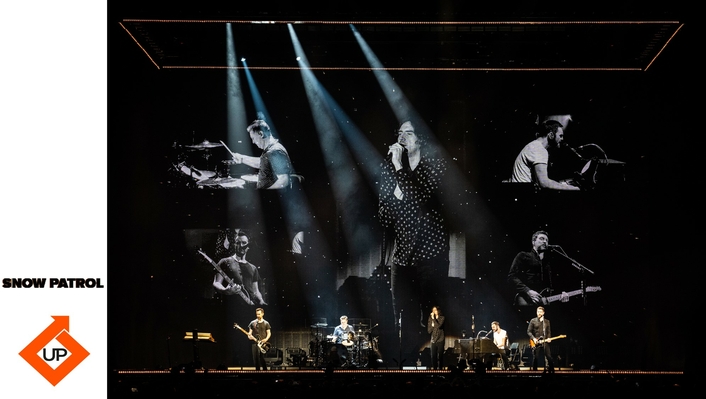 The Northern Irish band recently completed a 10-date UK and Ireland arena tour, which saw an immersive video design bring them closer to their fans.

Snow Patrol returned to packed arena shows between December and February, as fans flocked to hear material from their first album in seven years. The band pulled no punches with a unique stage design, including a video package from award-winning video rental company, Universal Pixels.

The show featured an immersive projection box design, with content being played on four sides. A concept that was imagined by Snow Patrol frontman Gary Lightbody, designed by Lighting and Show Designer Davy Sherwin and realised with help from Universal Pixels.

“We wanted to create an immersive experience for both the band and the audience,” said Sherwin. “My aim was to make everyone feel they were in the show together.”

The projection box was brought to life by four Panasonic RZ31K projectors - two flown over stage and two stacked at FOH – and the impressive LED backdrop, which was created using 10mm Leyard CLM panels.

Snow Patrol’s Production Manager, Robin Scott, said: “Having worked with Phil Mercer in the past, I was keen to continue the relationship. Universal Pixels impressed across the board - good customer service, good crew, good knowledge, good attitudes and well prepped equipment.”

On the success of the tour, Scott added: “I think the outcome of this arena tour cannot be underestimated. Given the band were away for such a long time, they proved they can still do it at that level and the show was, in my opinion, the best they’ve done production wise.”