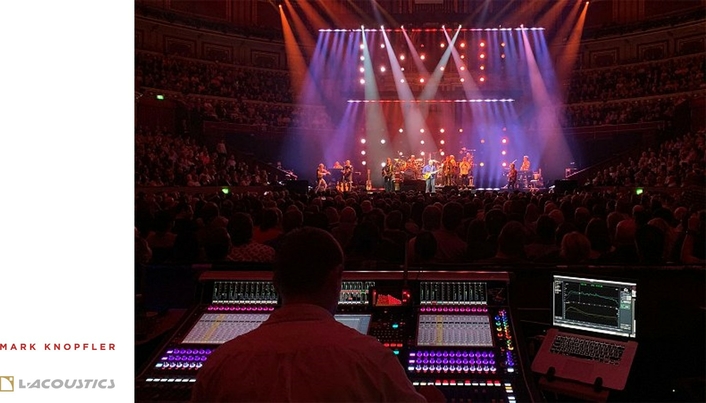 7.1 configuration loads in and out as quickly as standard systems across Europe and US, thanks to optimized design by SSE Audio Group

Mark Knopfler is on the road once again, supporting the release of his new Down the Road Wherever album with an epic show presented in L-ISA Hyperreal Sound technology by L-Acoustics. Having hit venues throughout Europe and headed to North America, Knopfler has once again raised the rock bar with a 10-piece band, and a 7.1 L-ISA configuration provided by SSE Hire, part of the SSE Audio Group.

Knopfler plays at the Oslo Spektrum.

Front of House engineer Dave Dixon and Systems Engineer Ulf Oeckel specified L-ISA technology, with Maxime Menelec – an experienced L-ISA operator - joining during production rehearsals to take over systems engineering duties from the beginning of the tour, setting up the initial design with creativity and audience impact in mind.

"The idea of moving to L-ISA technology is a direct result of a request made by Mark during the last tour," Dixon recalls. "He asked me to pan a guitar, and I bravely - or stupidly - said over the mic during sound check that I couldn’t do that in an arena as half the audience wouldn’t hear it.

“The constraints of Left/Right sound systems mean that I have always mixed pretty much mono. When you’ve got 11 musicians on stage, that's not an easy task. So when I heard about what L-Acoustics was doing with L-ISA, and understood what the technology is all about, I realised that it was exactly what we needed to fulfil Mark’s vision."

With creative ambitions realised, attention was turned to one of the most important requirements from the production team: that it could not take additional time to rig the system, so as not to put extra burdens on schedules and budgets. To that end, Oeckel worked with SSE Senior Project Manager Miles Hillyard on time-saving rigging and set-up solutions. Together, they came up with a range of innovative rigging, routing, and control solutions that mean the complete 7.1 L-ISA configuration is up and running in less than two and a half hours.

Oeckel had already created optimized solutions on a recent P!NK tour by combining amplifiers, motor control, and audio / power distribution into one flyable frame. He took that a step further for Down the Road Wherever: "SSE manufactured the frame that holds all of the amplification and all the motor control distribution," explains Oeckel. "They were really clever about combining it with a special platform so an operator could get up there and operate the system in case of failure.”

"The amp rack has working platforms on it left and right, and a built-in access ladder," continues Hillyard, who notes that the whole system was built over two weeks in the Redditch headquarters of SSE. 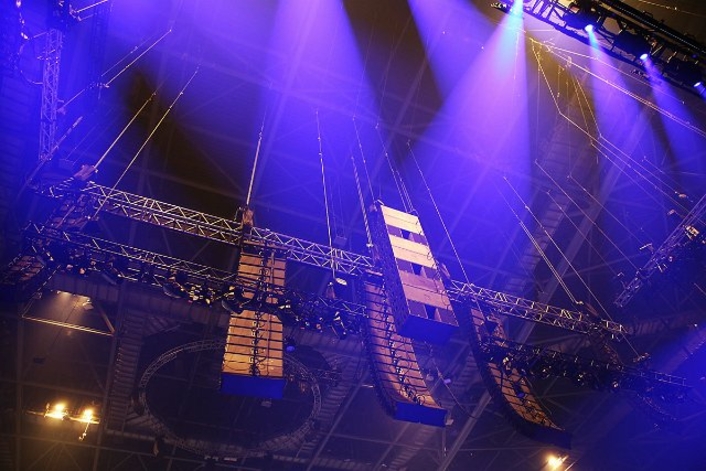 A full ten-hang L-ISA Focus design can be rigged in just two and a half hours.

The single cables for each hang incorporate cat5 for the SSE Prosight2 Inclinometer system, which has also been updated and improved specifically for this project so that a single handheld meter unit can take readings from all sender units. The system calculates the resting point of any speaker hang within nine swings, so engineers don’t have to wait for the PA to stop swinging every time they change the angle of the hang. "It can save up to around ten minutes per hang,” explains Hillyard. “That adds up to a big time saving.”

Possibly one of SSE's most significant innovations for this project was a new, adjustable, mechanical system for changing the angle of the hangs.

"After working through several ideas, we now have a single-point, swingable rigging system for adjusting angles," says Hillyard. "Basically, it clips onto the front of the truss and has teeth in it that allow you to lift it and turn it. Once you've got the angle set, a solid bar drops down and locks it in place.” 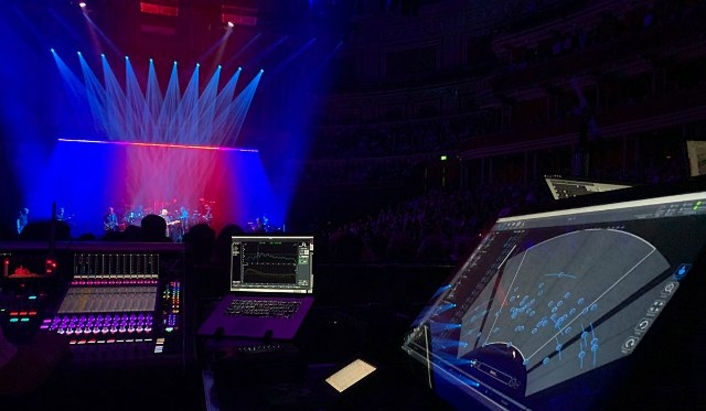 As well as these mechanical solutions, the audio signal distribution was fully digital, from the DiGiCo SD7 at front of house to the P1 processor and LA12X amps, using the Milan AVB-based deterministic network protocol, which also had to implement a redundant routing system to and from the SD7 with two L-ISA Processors. Hillyard: "We needed to connect a second L-ISA Processor and be able to switch to that at the push of one macro key on the console."

"With the help of SSE, we put all of these innovations together into one system," reflects Oeckel. "A full ten-hang L-ISA configuration that, even in early rehearsals, we were able to rig in just two and a half hours. We have proved that it is possible to rig L-ISA in the same amount of time as a conventional arena system, and that is what it was all about for me."

The Mark Knopfler tour uses an L-ISA Focus design, which varies from venue to venue. At the O2 in London, the biggest venue on the itinerary, this comprised five hangs for the main scene: three centre hangs of 16 K2 and two outer hangs of 18 Kara each. The two extension system hangs are made up of two arrays of 15 Kara each with two side-fill hangs of 12 K2 for extending the coverage of the system. A central cluster of nine KS28 subs provides coherent low frequency throughout the venue.

“This was a truly collaborative effort, with SSE and Ulf providing great equipment and methodology, optimized to have a really fast load in and load out,” adds Menelec. “But we also have a fantastic team, including crew chief Pete Hughes and the PA team of Guillaume Richard and Klaus Bolender. As a result, it was possible to use the L-ISA technology at every venue and after 47 shows, it will be difficult to go back to a Left/Right system.”

While the crew is enjoying the rapid set-up, at Front of House Dave Dixon is enjoying a new-found creative freedom. "I can now open up my mix to put instruments left, right, backwards, forwards, or anywhere in the scene, knowing full well that the audience are going to actually hear it,” he concludes. "I don't think that the idea of my mix has changed, but it has enabled me to put a lot more space into it. You can really express yourself and create a great expression of what the band are doing. For the audience it is a far better experience and that is what L-ISA is all about.”

That they have achieved this is borne out by UK newspaper The Times, which gave the show a glowing, five-star review, marvelling at Knopfler’s continued mastery of the guitar, as well as the number and diversity of instruments the band plays, writing, ‘Those mesmeric fills and effortless, mellifluous riffs adorned every song, most strikingly on a spellbinding rendition of Brothers in Arms.’