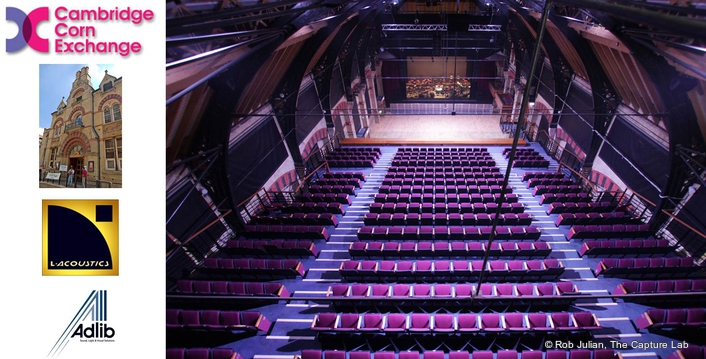 .
Cambridge Corn Exchange has been a well-known landmark on the UK touring circuit for many years and the scene of numerous memorable performances. Originally opened in 1875, utilising a quarter of a million local bricks of various different colours, its first concert was staged by the Coldstream Guards and a local choral society. As well as being used for corn trading, it was also popular throughout the 20th century as an event space and hosted its first Motor Show in 1898.

Operated by Cambridge City Council, its career as a serious gig and concert venue commenced in the 1970s. It is the primary arts and performance venue in the vibrant University town, presenting an eclectic mix of comedy, theatre and live bands and also conferences and exhibitions.

The capacity ranges from 1,350 fully seated to 1,870 with a combination of standing and seated … and it hosts over 270 events a year.

In early 2013, an open tender was issued by the Council for the design and installation of a new FOH sound system, onstage wedge monitors and mixing console.

Adlib’s Design & Installations division responded with a fully optimised solution to meet the venue’s dynamic needs … which was selected as the best all-round option.

The system design and installation was co-ordinated by Adlib’s John Hughes and the design created by Roger Kirby. The two have worked on several other recent high profile installations including The National Cycling Centre, Manchester Academies and Scarborough’s Open Air Theatre.

Norton states, “Adlib were everything you could wish for on the project, it is easy in my experience for people in suits to talk a good game in order to get the contract in the first place … but it is what comes next that is important! The installation team could not have been more helpful, highly professional and considerate in working within a building which to a large extent carried on as a working environment”.

The decision to go with an L-ACOUSTICS KARA system was taken after an extensive site survey and also after speaking with Adlib’s various leading live engineers and gauging their experience of working first-hand in the space … as well as a careful consideration of the brief issued by the Council.

Kirby completed the initial system design which was further developed and finalised by Vass and Orton.
The main considerations were the broad range of scheduled events; that the chosen speaker solution was fully flexible and adaptable for the venue’s operators; product suitability was another factor, along with long term cost effectiveness and value given the strict budget constraints of the project!

Sonically, uniform clear coverage of the room and suitable sound pressure levels throughout the entire space were essential.

The result was a main left and right PA system comprising seven flown KARA WST speakers which can be hung with or without two SB18 sub-bass units depending on the low frequency requirements for the event.

There are also two SB28 ground stacked sub bass speakers per side.

The main balcony coverage is dealt with by a centre hang of five KARAi WSTs. For lip and in-fills there are two 8XTis along the front of the stage and two 12XTis at the edges of the stage either side. For delays another two 8XTis provide under-balcony coverage with three more installed at high level dealing with the extremities of the balcony and back seating rows.

The system is powered by L-ACOUSTICS proprietary LA8 and LA4 amplifiers. 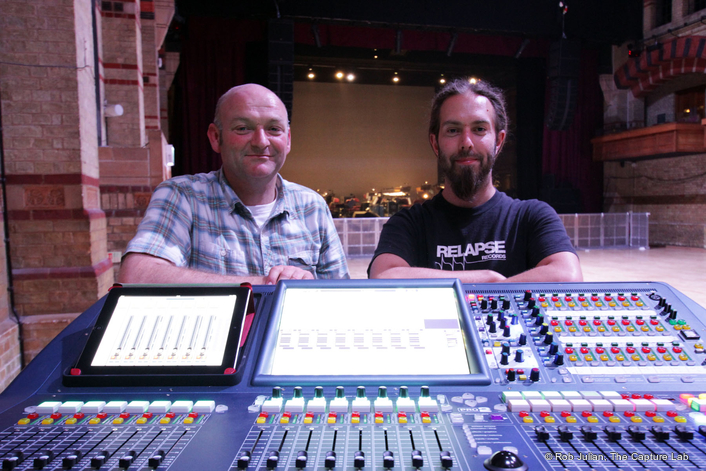 For the onstage wedges 10 of Adlib AA-MP4s were supplied, well known for their robust sound and unobtrusive low profile. “The power and finesse of this discreetly packaged product has quickly established it as an industry standard. The MP4 has become a preferred wedge for numerous artistes, making it an easy choice for the venue,” says Kirby.

The monitor system is driven with Crown XTi6002 amps.

For the house console, Adlib supplied a Midas PRO2, complete with a DL-251 stage box to add 48 inputs and 16 x outputs to the standard PRO2 I/O. Like the loudspeaker system, the console was chosen for its flexibility, performance, reliability and value.

It is also a console with which most professional guest sound engineers are likely to be familiar. Hughes adds “Adlib has witnessed a huge surge in popularity in the Midas Pro 2 over the last 12 months. We believe that this product provides by far the best value for money in the price bracket and this opinion was echoed by all the venue technicians”.

While it was relatively straightforward in terms of an installation system, the challenges came from the building which is Grade II listed and therefore subject to some very specific restrictions. Due to its architecture, cable routes had to be non-invasive and their management required plenty of lateral thinking!

Another challenge was installing a system to cater for all the various different stage / seating configurations with three different front-of-stage positions. Adlib’s installation team configured the L-ACOUSTICS KARA hangs utilising four different sets of flying points to deal with this scenario. All the delay loudspeakers are time aligned for each active PA flying point. The main KARA hangs can also be deployed with-or-without the flown L-ACOUSTICS SB18 subs.

The actual on-site installation work was completed in a very efficient nine days, followed by a week of system commissioning and training.

During this time, Adlib trained the house crew who will be running the system day-to-day on the fundamentals including the Adlib patch and tie-line system which was also integral to the project; the L-ACOUSTICS speaker system and rigging operations and also their LA Network Manager software; the Midas PRO2 control surface and the Crown Hi-Q Net System Architect.

Adlib also supplied a ‘system’ engineer for the initial run of events utilising the new equipment.

The first major show was ‘Joy Division Reworked’ by the Heritage Orchestra and since then it has been used on numerous other shows and events, all with very positive results and feedback.

Technical Manager Chris Norton comments, “The installation of the KARA system has opened up a wealth of opportunities for us as a venue and there is already an increase in the number of shows opting to use the in house system”.

He explains that before, sound quality was such an issue with comedy shows where spoken word clarity is crucial that they were hiring in a system for every performance! “Thankfully those days and that expense is now gone!”

“Adlib have not just provided us with an excellent solution, but did so in a slender window of opportunity, enabling us to be up and ready to go for the start of another very busy season”.