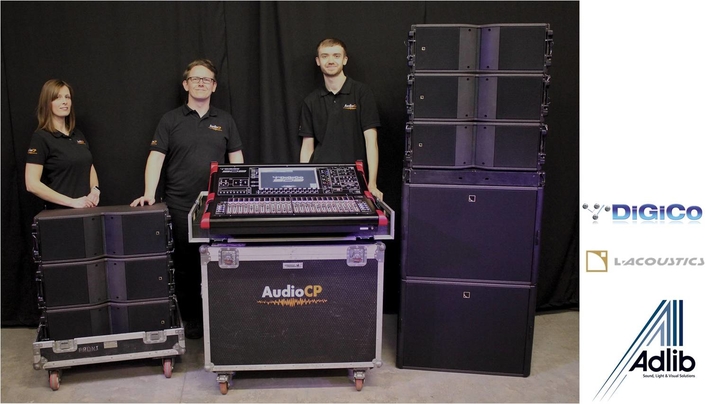 Adlib’s Scottish operation continues its active support and strategic partnerships in the region with another sale of premium brands L-Acoustics and DiGiCo to rental company AudioCP, a busy operation based in Glasgow and headed by Scott Young.

AudioCP was founded by Scott in 2012 and specialises in providing carefully crafted sound systems for the live music sector. Scott, who originally studied popular music at Edinburgh’s Napier College before working as a professional drummer for 10 years, has also owned and run a recording studio and a rehearsal room … so he knows a thing or two about good sound!

By late 2016, he was looking to invest in a premium audio system for AudioCP complete with a state-of-the-art mixing console to enable the company and its business to move up several levels, consolidate their current client base and also pitch for larger and higher profile projects.

Coincidentally – just before Scott started thinking seriously about the upgrade, Adlib Scotland’s business development manager Barclay Dakers invited the company to visit their warehouse – also in Glasgow - and discuss potential options available through Adlib. At the time he was unaware that Scott was actually on the verge of being in the market for a new system!

Right from the first approach, Scott was impressed by Adlib’s attitude. “They were relaxed, friendly, highly knowledgeable in the field of live audio and totally understood where I was at – it was obvious that we were on the same wavelength,” stated Scott.

He explained AudioCP’s specific requirements and after listening carefully, Barclay recommended that Scott and his team consider the L-Acoustics KARA complete with SB18 subs. This is an especially good choice for covering shows and events where the PA has to be ground stacked, and for companies where it’s essential to have a flexible system that sounds equally as good flown or on the floor!

Once Scott decided to go ahead with a purchase, he also looked at some other brand / supplier options, but all roads led back to Adlib and L-Acoustics.

Before he’d made his final decision, Barclay and Adlib director John Hughes visited AudioCP’s facility, and it was after that meeting that Scott knew L-Acoustics was the right choice and Adlib would be an excellent supplier and partner.

“There are many ’great sounding systems’ out there” he comments, but what gave Adlib / L-Acoustics the edge in this case was a combination of three things: the sound quality and flexibility; the potential for cross-rental business … and “the service and support from Adlib, which was really outstanding right from the start”.

Purchasing the DiGiCo SD9 was a big leap for the company in terms of quality and functionality. For many years they had hired in this level of desk for their larger shows and tours, and it made complete sense to make the further investment to compliment the new speaker system. The console was supplied with a D2 stage rack, and they have since added a Waves SoundGrid Server system to be used alongside the SD9.

In addition to providing L-Acoustics certified training for the regular AudioCP engineers, Adlib supplied one of their touring engineers to assist AudioCP when the system was delivered in setting up and running it for the first time. This gave the opportunity for any questions from their regular engineers to be answered, and Adlib subsequently provided phone support. “This aspect was over and above what we expected,” says Scott.

The system immediately went into action on a wide range of shows.
For Glasgow University Union’s Fresher’s Week, indie band Clean Cut Kid experienced the tour grade audio provided by AudioCP in the Union’s 2000 capacity venue. Their tour manager commented on the power and clarity of the system, while their touring FOH engineer was able to plug in his showfile into the SD9 and be gig-ready.

It was used for a performance by famous jazz guitarist Martin Taylor – renowned for his ‘fingerstyle’ technique - who played a show at the Glasgow Royal Concert Hall as part of the Glasgow International Jazz festival programme, and proved perfect for highlighting the detail and intense intelligibility demanded by jazz enthusiasts.

Scott is delighted with his decision on the speakers, the console and to align with Adlib as a sales partner.
“They have been brilliant at every stage of the process, and we will continue to purchase from Adlib as we add to the rental stock – I simply could not recommend them enough!”

Adlib’s John Hughes stated, “It’s great to see companies like AudioCP grow their business through considered investments in quality equipment. It’s been a pleasure to do business with Scott and his team and for them I think it has already proved a smart and successful move”.