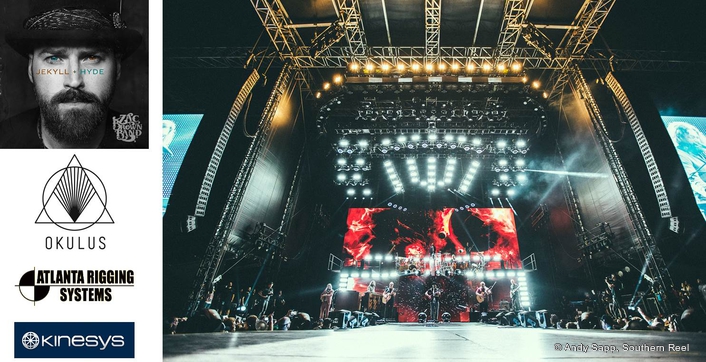 The Kinesys control system was specified by the tour’s rigging contractors Atlanta Rigging Systems (ARS) and is running 39 axes of movement facilitated by 38 Lodestar 1 tonne chain hoists and a custom screen element.  Ten of the axes run with Kinesys variable speed Elevation 1+ controllers while 28 run with encoded fixed-speed hoists.  The system also features eight pile-wind winches, which were custom-fabricated by ARS to control a gauze screen in front of the stage to be used as a projection surface at integral moments throughout the show.

Okulus were contracted for the tour based on the success of their 2014 production design for the band and developed the 'JEKYLL + HYDE' design based on the band's desire to better utilise the vertical space between the custom set piece and the lighting grid above.

“Zac really understands the power and drama of movement,” explained James, adding that Okulus was really pleased when they heard ARS was proposing Kinesys to take care of all the automation, as “it was essential to have ultimate flexibility and adaptable control”. 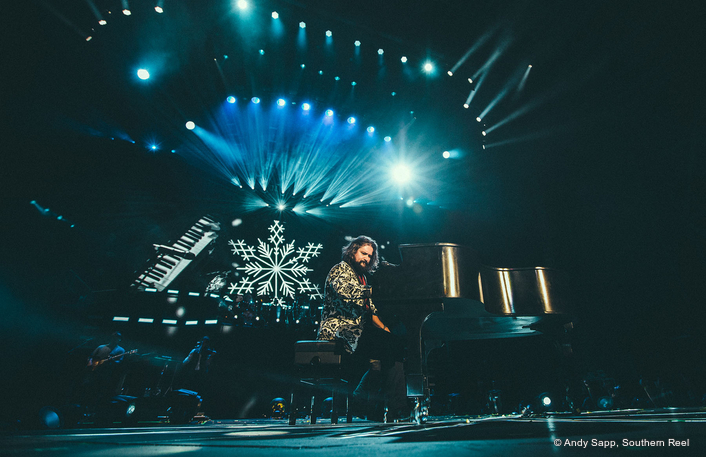 Historically, ARS has used Kinesys control on every Zac Brown Band tour that they have rigged – most recently the presence was seen in the acrobatics featured during the band's show with members of the band flying across the stage supported by rigs using the Kinesys control.

The current 'JEKYLL + HYDE' tour features nine stadium dates in addition to stops at arenas and amphitheatres across the country, necessitating a versatile rig that allows the band to deliver the same experience regardless of the actual physical stage space.

To ensure the entire set is visually fluid 19 sections of truss on the rig are designed to move - primarily providing lighting positions – and are suspended on the 38 Lodestars, including a fan of five ‘spine’ trusses mid-stage centre.  These moving elements are absolutely fundamental to the design, as they enable the architecture of the stage space to be varied and take on additional dynamics.

The Kinesys control system and Vector software is being operated on the road by Michael Shields AKA ‘The Lord of Automation.’ 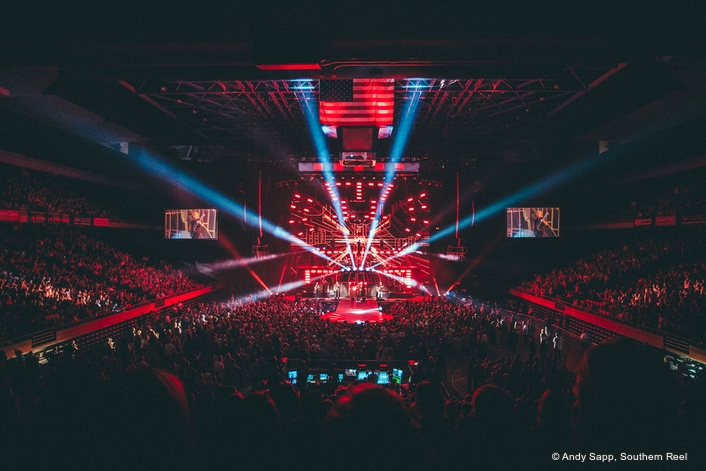 ARS’s Vice President Dave Gittens praised the system noting, “We invested in Kinesys because we think it’s the only control system on the market that gives us the ability to run both variable-speed and fixed-speed hoists simultaneously, as well as introducing other and alternative machinery, which can be constructed by us in-house, like winches and trolleys”.

Speaking generally, Dave observes that automation is becoming increasingly popular as a visual element for all types of shows, and adds that having Kinesys as a ‘house’ product enables them to offer their clients more cutting edge and imaginative solutions that are still very cost-effective.

Another reason for investing in the Kinesys brand is to better facilitate integration with touring systems used by international artists, making it easier and more seamless when they bring their tours through the US. This is directly related to Kinesys appearing more frequently on riders and touring specs.

In the last year, and in response to expanding business in the US, Kinesys has opened a new US office, and boosted its technical support.