Indochine celebrates forty years of rock with a grand tour 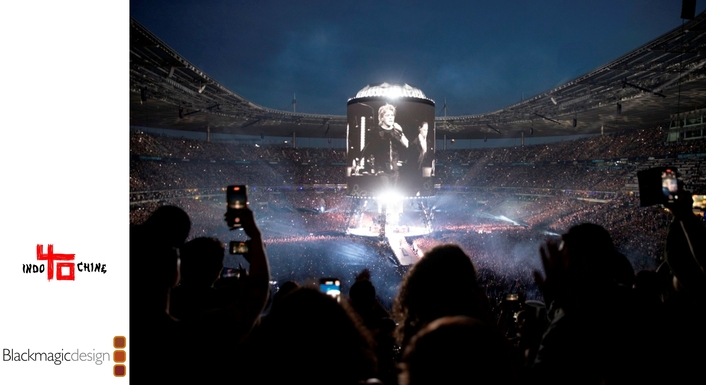 To commemorate their 40th anniversary, pop rock legends Indochine planned a grand tour of venues around France. Although the Covid pandemic delayed it for a year, the six shows in five venues used a stunning combination of light, sound and a vast LCD tower to create a memorable performance.

"This was a huge undertaking, involving many custom elements that all had to be designed and built from scratch, and that necessitated an agile workflow that could adapt," begins Lucien Peron, freelance broadcast engineer.

"We needed to set up and wire twenty cameras in some of France's biggest stadiums. We had limited time and resources for setting up, so I worked with PhotoCineRent in Paris to supply the tour with a PPU workflow that I knew and trusted." 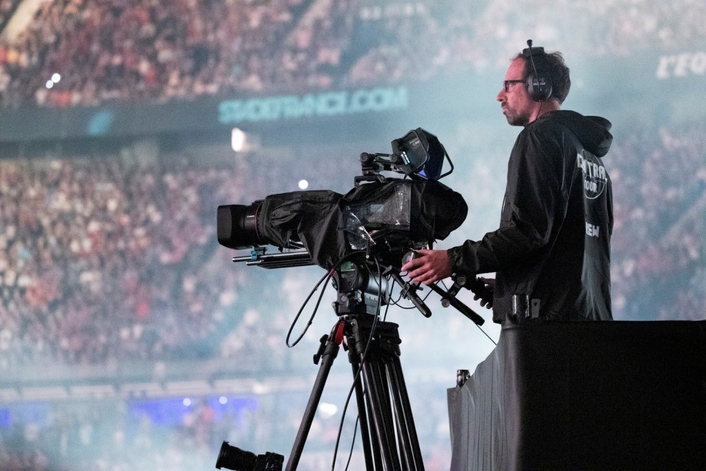 "I chose the URSA Broadcast G2 and URSA Mini Pro 4.6K G2 with motorized 4K PL cine zooms from Canon as they work well with the iris control through the Blackmagic protocol and are straightforward to use." 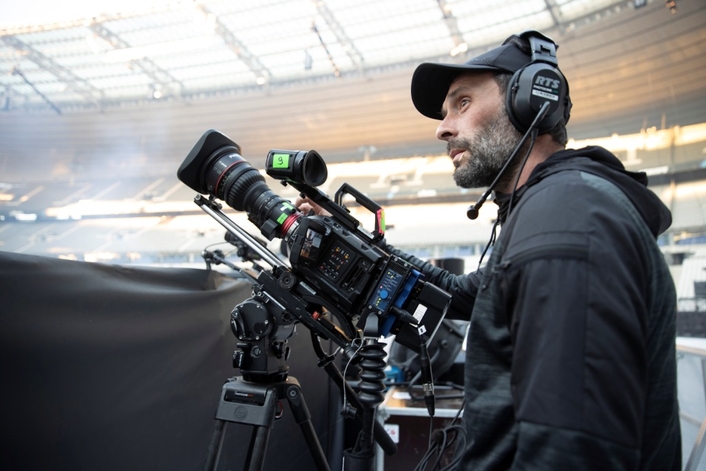 At the long ends of the stage, there were two Pocket Cinema Camera 6Ks with Canon 16-35 EF lenses. These were wired into the video village via SDI using Blackmagic Micro Converter BiDirectional SDI/HDMI 3G, enabling control on these cameras.

Five Panasonic UE-150 PTZ cameras, connected via SMPTE were on stage and a Panasonic RP-150 was used for shading and controlling the PTZ’s. 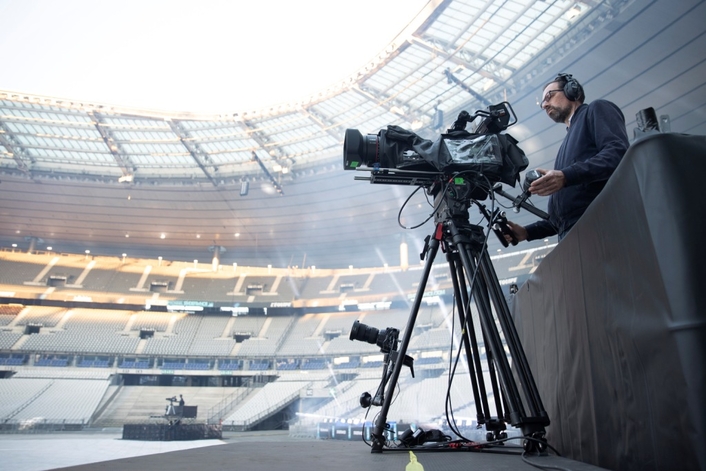 At the same time, point of view (POV) cameras were placed at the stadium's four corners. "We used Pocket Cinema Camera 4Ks with Lumix 12-35 lenses to give department technicians a wide angle POV for reference," Peron noted.

Into the Control Room

In the control room, all fibre systems were wired into an ATEM Constellation 8K live production switcher, providing independent video feeds to the technicians while also recording different ISO feeds. 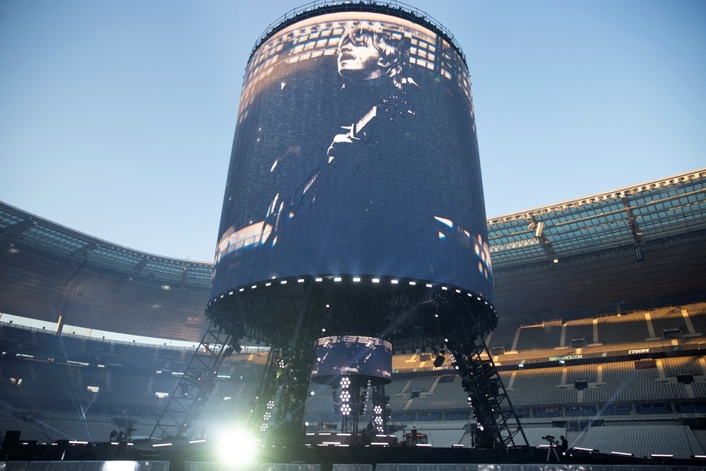 "We took full advantage of the four independent multiviewers," explained Peron. "Since the Constellation acts as both a matrix and format converter, we didn't need additional video matrix or multiviewer hardware; we could provide as many independent outputs as needed, and the same for multiviews." 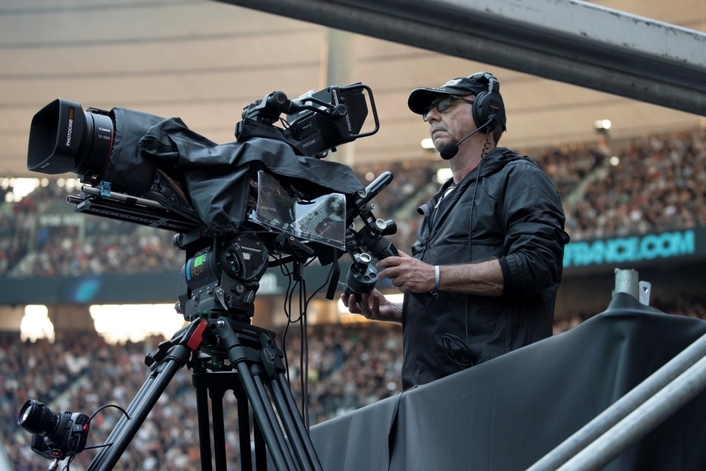 "Up to four cameras were live on the LED screen, so having the two layers of the program (PGM) and preview (PVW) allowed him to mix them simultaneously on the desk," says Peron.

The ATEM Constellation 8K was the core of all department monitoring feeds. Technicians from other departments also had a Videohub Smart Control Pro router, enabling them to switch their independent outputs on the production switcher. Depending on their needs, they could switch from a POV camera to the computer visualization of the screen, watch the multiview, or Jon's quad PGM. 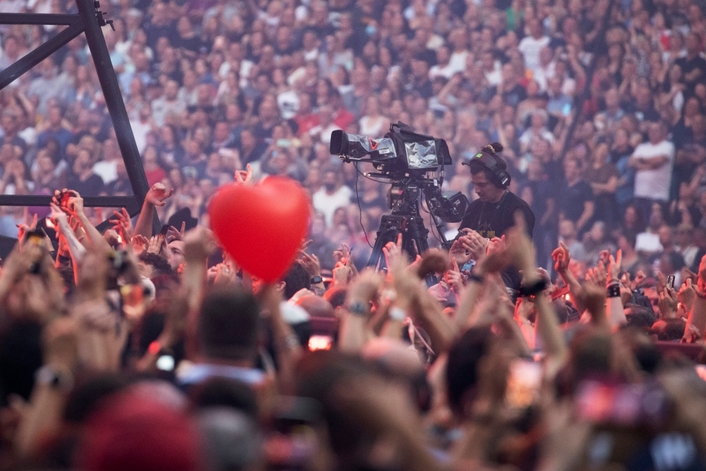 "Of course, no discussion of the concerts would be complete without mentioning the 360-degree LED tower, which was the largest screen ever used for a live concert," Peron added. "It was forty-five metres high, thirty metres in diameter and weighed two hundred and fifty-eight tons. In fact, it was imagined by the band's leader, Nicola Sirkis himself, with PRG France and PRG Projects making it a technical reality. It was important to Nicola that the lighting and sound be contained in the tower, so it had to be designed to relay the sound and picture perfectly."

The LED tower was built with Titan-X panels, and needed a team of engineers to build. The 360-degree screen was 2500m2 and had a resolution of 9216 x 2880 pixels, with the images being processed by seven hidden GX2 servers. The tower had an incredibly high transparency rating of 70%, allowing sound to be transmitted through the structure, but also to reduce the impact of wind. The structure was IP 65 rated, allowing it to endure all weathers. 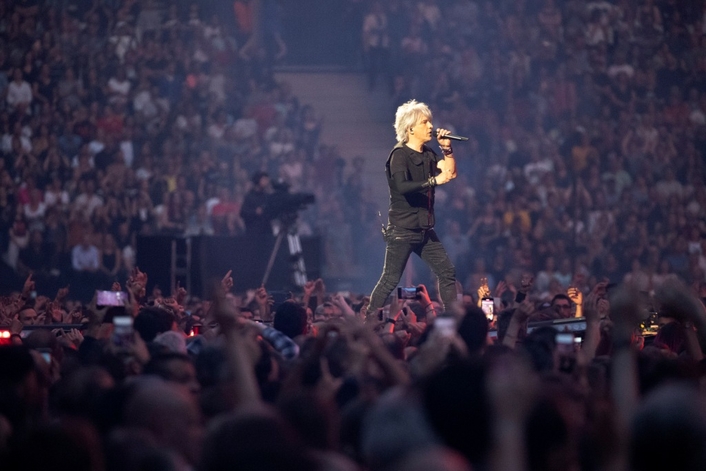 "As any fans attending the concerts will agree, the tour was an absolute runaway success," Peron concluded. "The band was incredible, the visuals were a stunning success, and I couldn't have asked for a more memorable or brilliant set of events to be involved with." 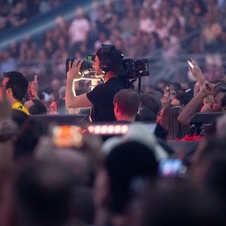 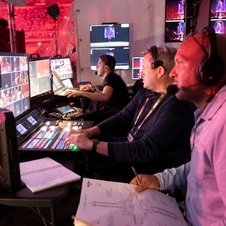 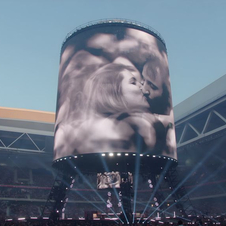