HSL Only Lives Today with Netsky 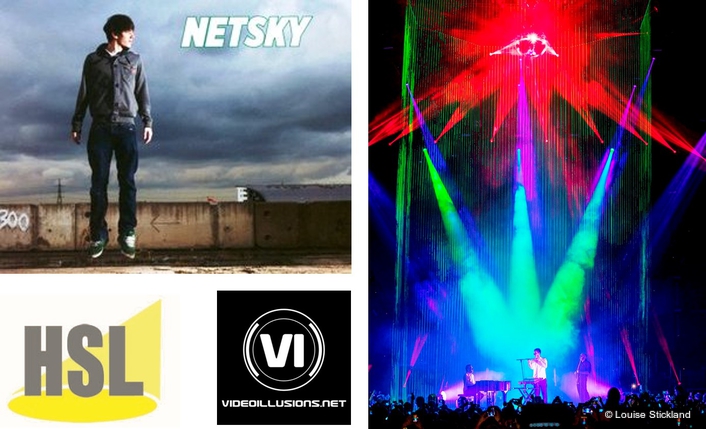 Lighting and visuals designer Andy Hurst enjoys challenges, and when that d‘n’b star Netsky announced a high profile one-off homecoming show at Belgium’s legendary Antwerp Sportpaleis, he knew he needed to pull out all the stops to ensure it was a visual adventure for all in the room!

Blackburn UK based HSL was chosen by production manager Mike Clegg as the lighting equipment supplier and Andy and his crew worked closely with Dave Whiteoak of Video Illusions, who supplied and co-ordinated the screens and camera package.

Andy commented, “Jordan Hanson, in the HSL office, did a great job of project managing the lighting supply and an absolutely top crew on site was chiefed by Ian Stevens. They worked very hard ensuring the installation of a complex lighting rig ran as smoothly and efficiently as was possible in a very short space of time”. 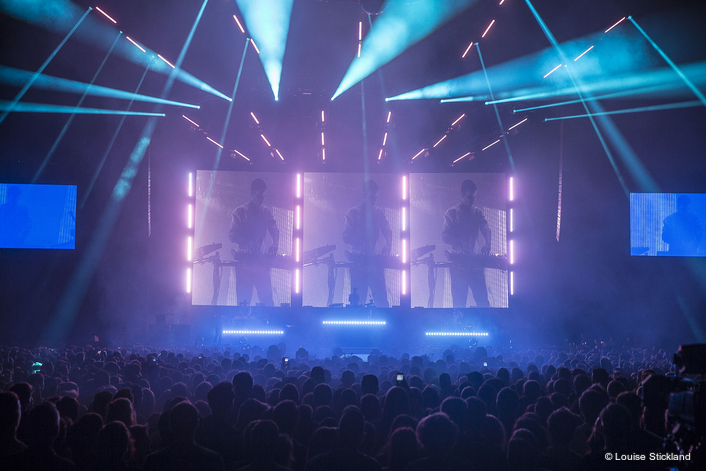 All the technical departments including staging, rigging and audio as well as lighting and video had one – very long - get-in day which was fully utilised.

Andy has worked with the Netsky for four years, and this was the largest single-headliner gig he’s performed to date. His goal was to produce something spectacular and jaw-dropping that was practical to rig in the timeframe.

Eleven ‘finger’ lighting trusses (see below) were therefore designed so the fixtures could travel in the truss to speed things up at the venue. 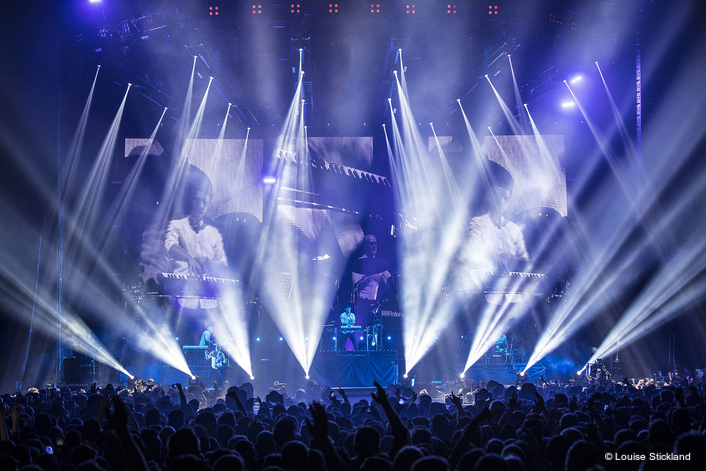 The music is incredibly dynamic and full of tempo and mood changes. He performs with a full band onstage plus assorted guest vocalists and musicians, which on this occasion included some classical talent which brought a richness and completely new dimension to some of the more hardcore d’n’b sounds.

Andy undertook a week of intense pre-vis which dealt with all the lighting building blocks, which allowed him to free up programming time onsite to fine-tune and add detail and finishing touches … which can make all the difference between a show and an experience!

The trussing system comprised of six upstage / downstage orientated fingers above the main stage, all on Kinesys motors. A U-shaped truss curved around the front of the stage and coming off that were five more straight trusses running lengthways down the arena above the first section of audience (which were static). The stage left and right IMAG screens were also flown from their own trusses. 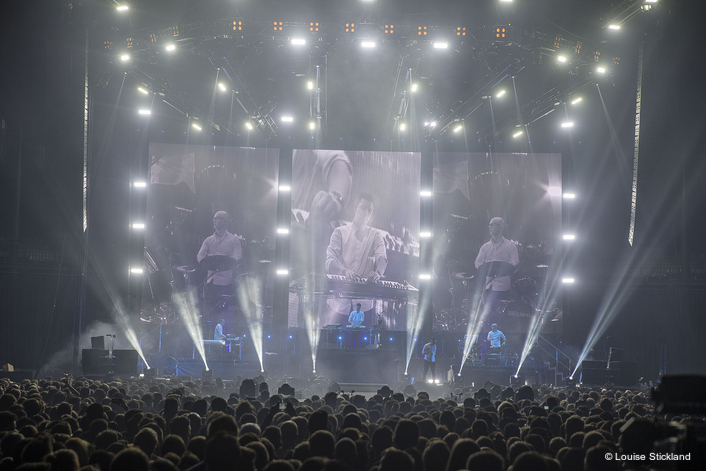 At the end of these over-audience trusses the B stage was built in the centre, connected to the A stage by a runway, and above the B-stage was an octagonal shaped truss also on Kinesys motors, which came in and out for a big laser effect at the top of the show and again for the first number of the encore. The Kinesys operator was Andy “Paris” Hilton.

Right in the middle of the octagon was a 40 inch mirror ball, used as a highly effective bounce surface for the Laser Blades around the octagon truss, another glorious example of the renaissance of the glitter ball!

The bulk of the moving lights were 68 x GLP X4 LED washes and 88 x Claypaky Sharpies for beams … and these were scattered all over the trusses and aligned the bottom edge of three LED screens. X4s also lined the runway between the stages at floor level.

Out of a total of 10 Martin MAC Viper Performances, four were reserved to highlight the mirror ball in the middle of the octagon, three on the front truss were the prime key lighting for the band risers, with the other three upstage behind these risers for silhouetting effects. 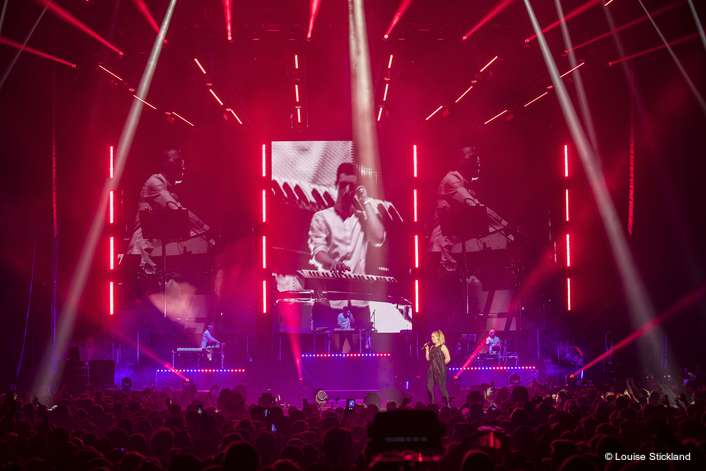 For low level front fill, five Robe LEDWash 1200s a side were positioned along the downstage edges and very effectively skimmed across the stage and set.

The three risers were picked out with Robe CycFX 8 moving LED battens around the edges which created an interesting lightbox effect, and when pointed downwards, it looked like the artists were standing on a floating wedge of light.

Thirty Laser Blades – all laser equipment was supplied by ER – were positioned around the perimeter of the octagon, with another six on the ends of the over-stage trussing fingers and nine BB3 lasers were rigged along the bottom of the LED screens, three per section.

Last but certainly not least, 60 x Philips Nitro LED strobes were dotted all over the rig for some serious retina burn … Andy has a technique of utilizing strobes for drops that go into a moody section of music as well as those which precede an explosive build up. 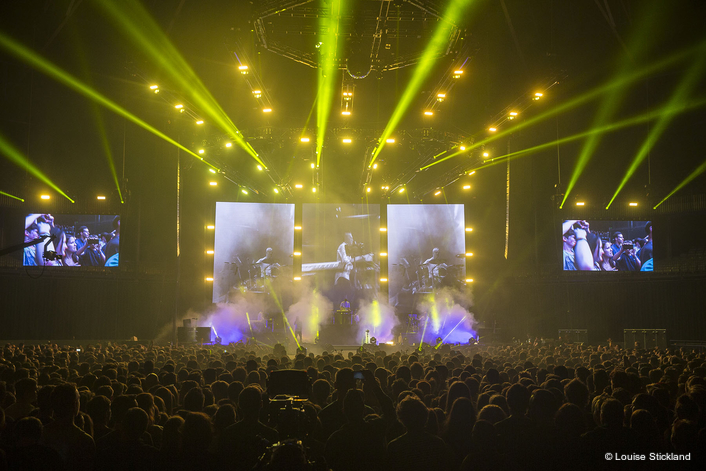 It was Andy’s decision to run the IMAG video content primarily in black and white to make it edgier and more contrasty and new playback content was also created for this show to Netsky’s brief of being more filmic in style.

Joining Ian and Paris on the HSL crew were Harrison Cooke, Andrew Whitaker, Ben Eastham and Neil Smith. “They were all fantastic, and the service and support from HSL both on the run-up and at the venue was excellent,” stated Andy.

The show was a huge success. An exciting collage of colour, movement and great music to energise the crowd and a testament to all on the production team who worked tirelessly to make it happen and give Netsky an awesome homecoming gig.