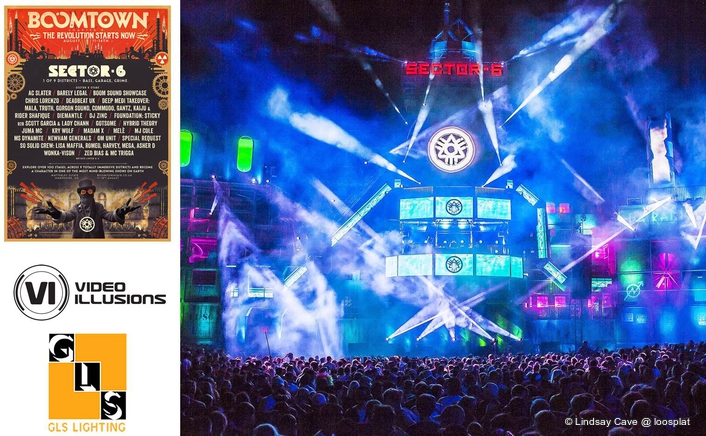 Sector 6 was an enormous brand new stage and performance area at the 2016 Boomtown Festival in the UK. A brainchild of Dan Borg, the crazy set design was created from several tonnes of reconditioned scrap metal and much ingenuity as a living, moving, breathing industrial sculpture … inspired by iconic structural components from steel works, power stations, nuclear reactors, etc. all united in an post-apocalyptic masterpiece of madness!

Boomtown is one of a handful of music events that has successfully retained a boutique ambience with a developing theme across a large and diverse site, with a reasonable capacity of 60,000.

Says GLS’s Ian Turner, “We were delighted to be involved with an invigorating, fresh and imaginative project like this. The set was completely stunning, Dave’s video was amazing, Sam made fantastic job of the lighting and it was clear that much thought and precision went into creating a fantastic visual harmony”. 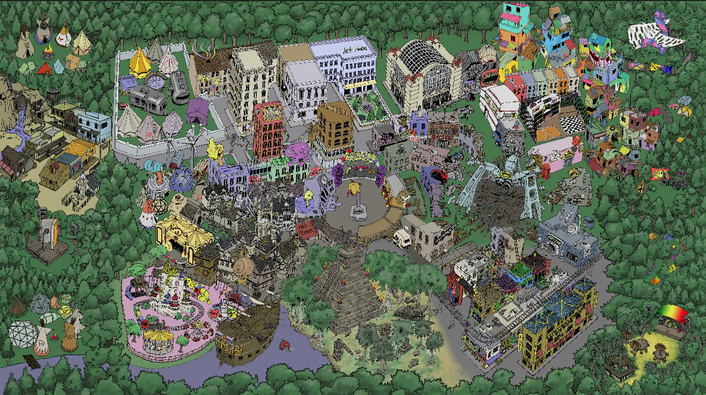 Illuminating Sector 6
Lighting was a carefully layered balance between architectural sources highlighting and emphasising the meticulous scenic detail of the structure which included several moving parts … and the effects lighting needed to created WOWs for the pumping DJ sets and to immerse the audience fully in the whole Sector-6 experience.

It was also absolutely crucial that the lighting kit survived the event whatever the weather … so the vast majority of it was IP65 rated and from leading brand SGM … in which the HSL family has made major investments this year.

Ian continued, “This stage was about using the right kit in the right place.  On a structure this huge, inflatable domes just don’t cut it. We agreed from the start to specify IP rated lights that did the business and could survive whatever meteorology was thrown at them. The SGM range was ideal”.

All of these were run through the lighting console operated by Paul De Villiers. 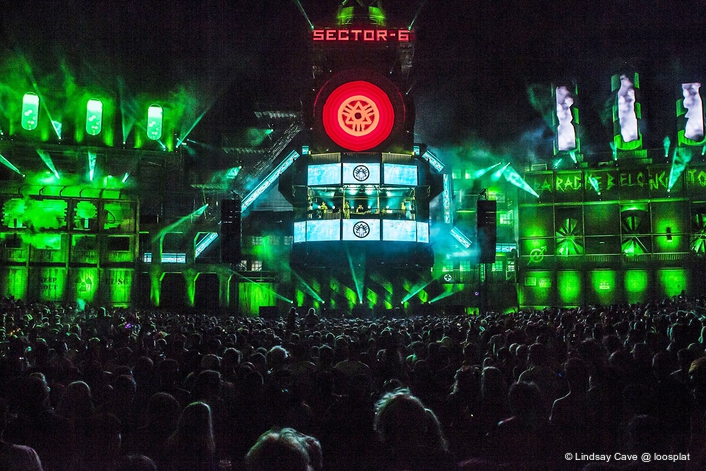 The 63 metre wide by 35 metre high stage was divided into four key areas for lighting purposes. House left / stage right was the pistons and oil silos; the centre was split into two sections, the main centrepiece and inside that, the DJ booth, which was treated separately. Stage left / house right … were the wheels and chimneys.

To add an extra dimension of set lighting, four large trussing towers were installed at the back to add height and facilitate fixtures that could shoot up into the sky.

The 29 x G-Spots were the workhorse fixtures on the rig explained Sam, and these were dotted throughout the four areas, mostly clamped onto the structure itself.

Eight of the G-1 Beams were rigged to the towers together with eight Q-7s, which provided an excellent searchlight effect visible from all over the site.

A principal focal point was a 12 x 15 panel circular LED wall wrapped in G-1 Beams which was flown above the main DJ booth and above that, nearing the ‘crown’ of the structure, was an 8 metre circular video screen with another 8 x G-1s around the perimeter.

The Q-7s were also scattered around both side sections, with another 10 on towers around the arena enveloping the audience and drawing them into the action.

The P-5 LED floods were the main architectural lights, grazing up the metalwork, highlighting the different metals and raw material, texturing and providing key light in strategic areas like through the windows. They also created some effective shadowing across the moving parts enhancing the depth of the space. 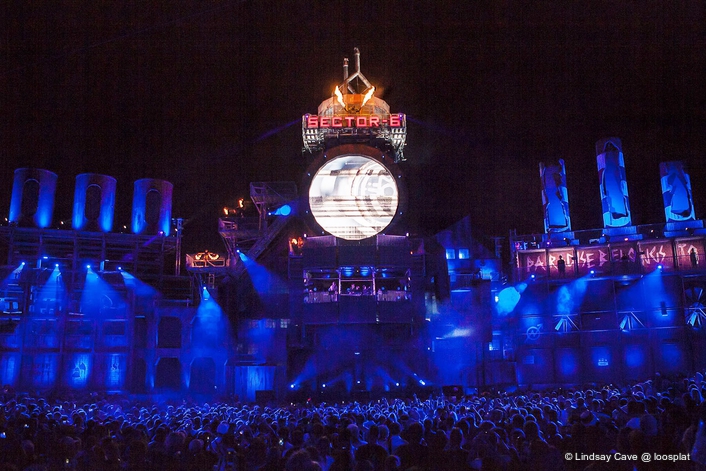 The smaller P-2 LED floods / strobes were ensconced in the tighter positions and used to create multi-tonal lighting.

The Ribalta battens were positioned along the front of the stage for a nice even wash, and inside the DJ booth two banks of six GLP X4 Impressions were pixel mapped creating an eye-catching low res pixel wall behind the DJ.

Apart from 12 fixtures, everything was LED, so the whole rig was environmentally friendly as well as looking every bit as high impact as everyone had intended.

Sam was impressed with the SGM fixtures’ performance – both aesthetically in terms of the design and how they physically endured the operating conditions and the environment generally. He reckons the G-Spots out-performed all expectations and will “definitely be using them again!”

The biggest challenge for Sam and Sector-6 production LX Simon “Diggers” de la Cour was getting all the fixtures into place during the three day build / technical period!

Designing it all on a computer is one thing, but then applying the kit in reality in situ to a large intricate bespoke structure … which has never been built before … is something totally different!

When it came to programming, Paul de Villiers worked closely with Dave Whiteoak to ensure continuity and a nice flow between lighting and visuals, together with the laser and pyro teams to give a fluid and visually provocative vibe to the structure and all the action taking place. 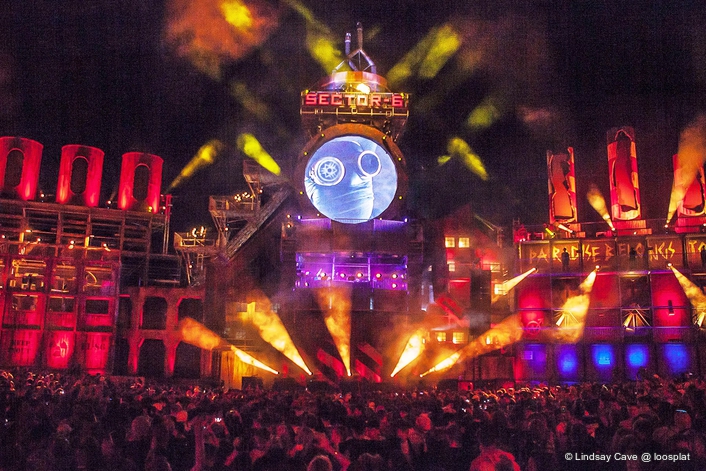 More than Video Illusions!
Video Illusions’ Dave Whiteoak was “honoured to be offered this project” although in fact when Robin initially sent over the design, his first reaction was “Holy shit!”

After that, and very excited about the prospect, he called Robin immediately and agreed that Video Illusions would do it … before even showing it to any of his team!

“I knew we could smash it!” he declared

Working together with Simon Stuart of HSL and Ian Turner of GLS – the HSL Family  company based in Southampton  - Video Illusions accepted responsibility for delivery of both lighting and video design, and worked closely with Dan Borg and Sam Tozer on the integrated plan to light the structure and treat specific areas with customised video.

Being a completely new and bespoke concept threw up many challenges, but Dave explains that once on site, “When we all stood back and looked at where we were and what we were actually working on …  we knew we had a very special team on this project”.

Once the installation was underway, a few additional challenges popped up like the LED tubes either side of the main circle, for which Toby Shann from Acorn “helped us out massively” recalls Dave describing how for these and in certain other areas … there was literally only thin air in which to rig! 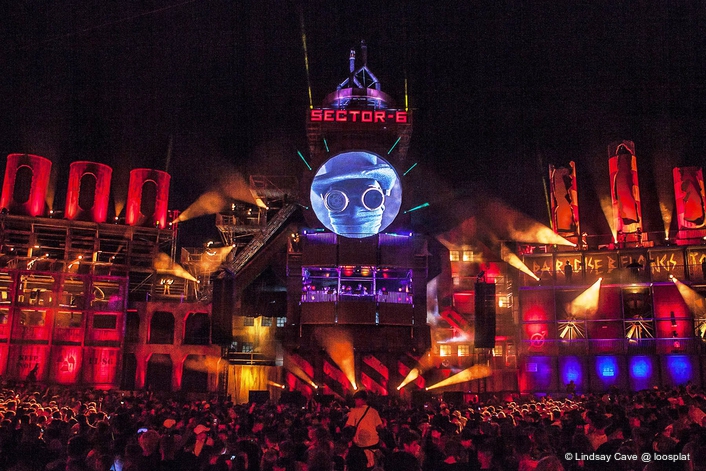 “Toby is always a legend … within the hour would have a fixing point for our LED” says Dave, adding that they ploughed determinedly through day and night sticking fully to the original video design plan … working out how precisely to make each LED panel fit to the structure.

The video theme was based around the Boomtown’s masked man and industrial revolution steam punk. For the content animators providing an unusual concept meant they had something interesting and invigorating to work on in the studio.

“They pulled numerous elements together to create a flowing storyboard that ran coherently throughout the weekend,” says Dave.

A Resolume media server with 6 full HD outputs was used for control and with its new advanced mapping feature each section of LED could be mapped pixel by pixel.

The server’s new DXV 3 codec offered smooth and seamless playback for running the special nightly AV show, and Kev and Tom could mix back-to-back when VJ'ing throughout the weekend. 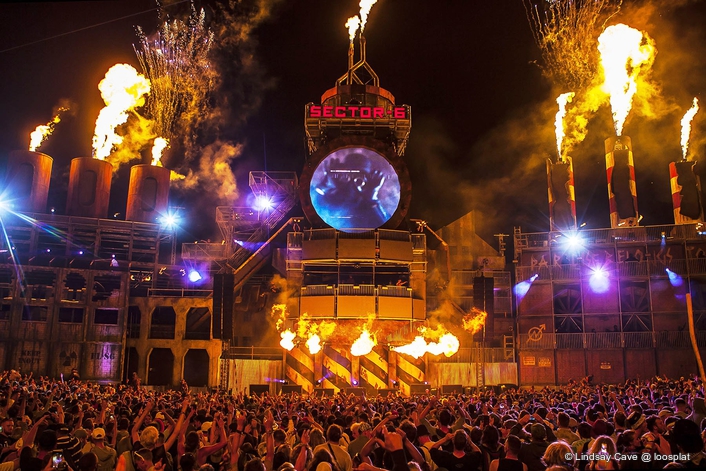 Gruelling though the whole Sector 6 experience was in terms of creating a highly original and bespoke environment for the first time, Imagineering the lighting and visuals was also one of the most rewarding projects that Dave has ever undertaken.

“Getting a text from Dan on the Sunday night after the final show and Robin saying it was literally the best rave-up atmosphere ever … was SUCH a great feeling,” he enthuses. “It made everything worthwhile and recognised the incredible teamwork and synergy that united to make it all happen in such a spectacular fashion that was enjoyed by so much of the festival population”.

The Sector-6 concept proved to be one of the most popular locations on site throughout the weekend, at one point pulling 60 percent of the festival population who enjoyed the amazing atmosphere and superlative musical line-up. Even the weather joined the spirit of Boomtown 2016, beaming sunshine and staying dry.