Getting Behind the Scenes at 40-45 The Movie 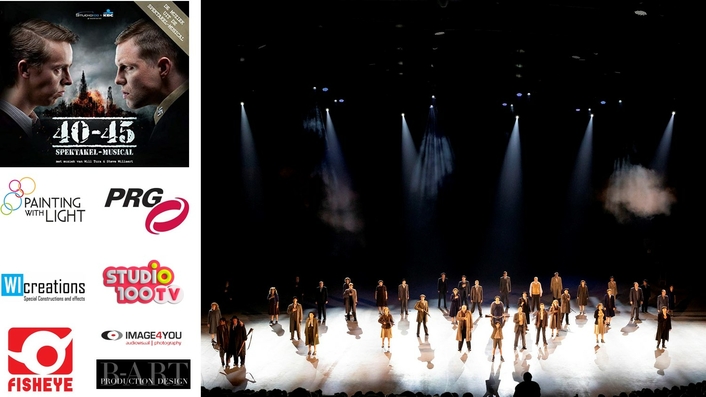 Four of the technical partners - Fisheye, Painting with Light, PRG Belgium and WIcreations - involved in the ground breaking 40-45 Spektakel Musical production being staged at the Pop-Up Theatre in Puurs, Belgium, by Studio 100 are featured in a compelling and candid Behind the Scenes (BTS) movie which has just been released on YouTube. 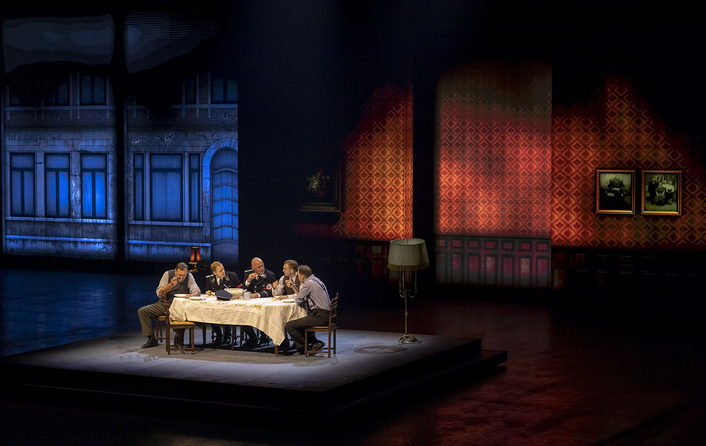 It gives viewers a unique technical and creative insight into the meticulous planning and huge challenges of producing this ambitious show set during World War II… the vision and foresight of Studio 100 and the strong teamwork, standards of excellence and innovative solutions that are making it happen.

It is a ‘must-see’ for anyone interested in the art of creative technical production.

Painting with Light also supplied 10 new disguise gx media servers for the playback video content which is appearing on eight moving LED video walls. Their segment of the movie looks closely at how video and lighting cues have been integrated via the grandMA2 control platform.

It examines the lighting process from conception to completion, explains the advantages of vital tools like visualisation and how it was used, plus special custom elements like the control of the video content’s virtual lighting which is appearing on the screens and has been compiled to match to the ‘actual’ lighting cues happening simultaneously on the set. 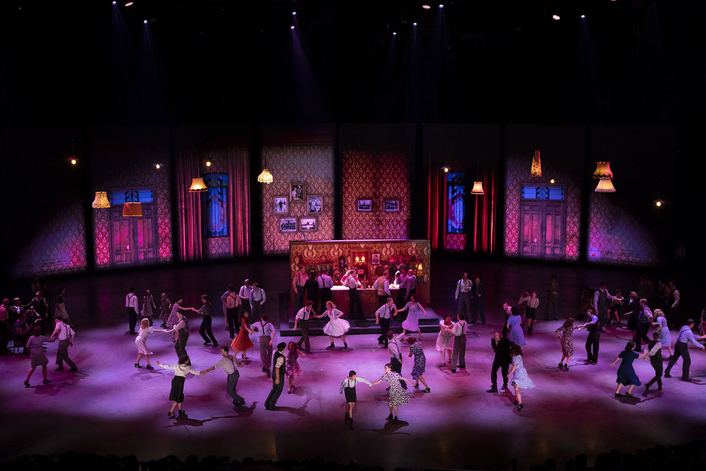 The tribunes themselves were also constructed by WIcreations in the theatre and each one contains around 14,000 parts, the majority of which have been custom machined. The tribunes move together or individually throughout the venue for the full two-hour show - in every direction and on every axis - sometimes with as little as 20 cm between them.

WIcreations also provided the battery-power systems for the LED walls and the tribune onboard audio and LED lighting.

Set design and build wizards Fisheye worked closely with set designer Stefaan Haudenhuyse and created some key props and scenic elements which are prominent in the show. The movie delves into the complex construction techniques – from design to CNC machining, the diligent research and the fine-tuned skills involved, all completed in-house at Fisheye’s workshops.

They include a 1:1 scale World War 2 Stuka bomber with turning propellers that ‘flies’ above through the performance space above the audience, and several automobiles including an Opel Blitz truck – with the petrol engine removed and replaced by an electric motor so it drives through the theatre. There is also a 30-metre-long train and a crashed Spitfire aircraft which burns realistically on the stage!

The train was built from scratch and the tricky part was to find a solution with a short turning distance so it could make a loop around and in and out the building.

All these items required painstaking and careful construction to bring them to life on the stage.

PRG has supplied and installed the lighting to Luc’s spec plus rigging and the 8 x 32 square metre LED screens which are secured on the moving wagons. 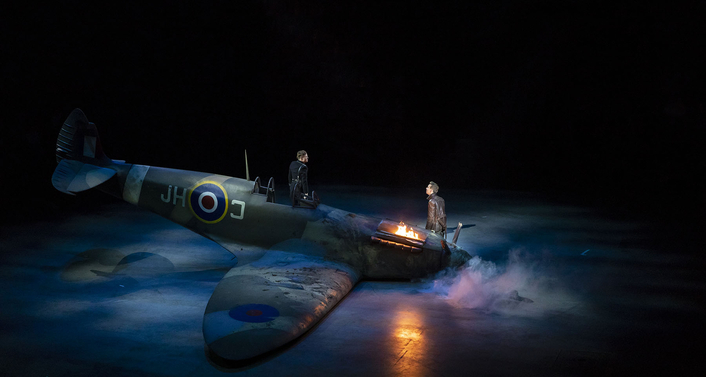 They were involved in some major special effects including flying the Stuka bomber and crashing the Spitfire onto the stage for which a custom 90 metre track is integrated into the venue’s roof structure. Attached to this is a specially developed power system which ensures the plane maintains the exact correct speed and altitude in every show.

The movie shows the rigorous lighting and rigging prep for this very special event and highlights the detail of the installation itself. It also features a brand-new LED moving light – the Icon Stage – manufactured by PRG which made its live performance debut on 40-45.

PRG is utilizing its award-winning Ground Control remote follow spotting system, which is working in 360 degrees to keep pace with the changing shape and form of the environment as the stands and wagons shift around the space, in conjunction with 4K and IR cameras to follow the principals at all times – even in near darkness.

The movie action starts right at the beginning of the production for 40-45 with the design and build of the pop-up venue and the different departments moving in for the show build.

Snapshots of the vast backstage operation that is energised daily to put on the show is related in interviews where the challenges are explored via creatives, technicians and engineering specialists.

An in-depth analysis of the work illustrates how these departments met the brief and aspirations of the producers and director Frank Van Laecke, and how they all collaborated to deliver a memorable and superlative experience for all guests.

The idea of investing in a movie to document ‘the making of’ this seminal piece of work partly came from its predecessor production, 14-18 Spektakel Musical, staged at the Nekkerhal in Mechelen in 2014-15, which was also a huge success.

Luc from Painting with Light felt that all the energy, thoughts, discussions and inventive solutions that were involved in this… should have been recorded. He ran this past the Studio 100 team who agreed…  and so the seeds of this movie were germinated at the same time they were all being inspired to develop the sequel to 14-18. 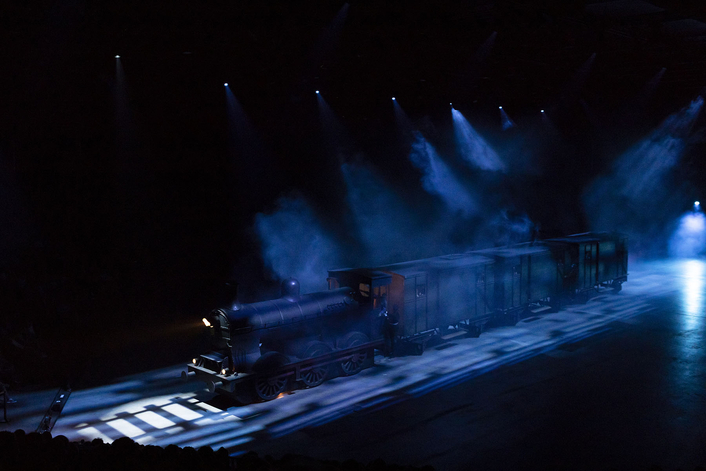 Once the production process was underway, Filip and his video crew kept up a constant but stealthy presence to capture all the drama, perspective and excitement of the show building process.

Instrumental in both the show and the BTS movie happening was Bart Caels from the 40-45 production team – who also appears on camera – and the overall BTS project was approved by Jan Bernolet, producer at Studio100.

The BTS movie has been produced by Image4You, creatively directed by Filip Vanhullebusch with Chris De Paepe as director of photography. They have carefully recreated the noir ambience and atmospheric lighting of the show in this movie, so it compliments in every aspect the work it is documenting.

Filip comments that it was an incredible experience to be able to document everyone’s work and produce a movie relevant to an international industry-wide audience that will stand the test to time as an authoritative piece of entertainment technology documentary filming.

Challenges included capturing the authenticity of the show’s real lighting, visuals and scenic design which were created for theatre rather than film, and also dealing with the intricacies and contrasts of the vast performance space and the incredibly intimate and personal narrative.

“We were able to lift every lid of every cooking pot from these master chefs! Hats off for so much talent and the access which allows us to share such a unique point of view with viewers”.

He also adds that – as respective perfectionists and over-achievers in their fields “we all know that details matter”. 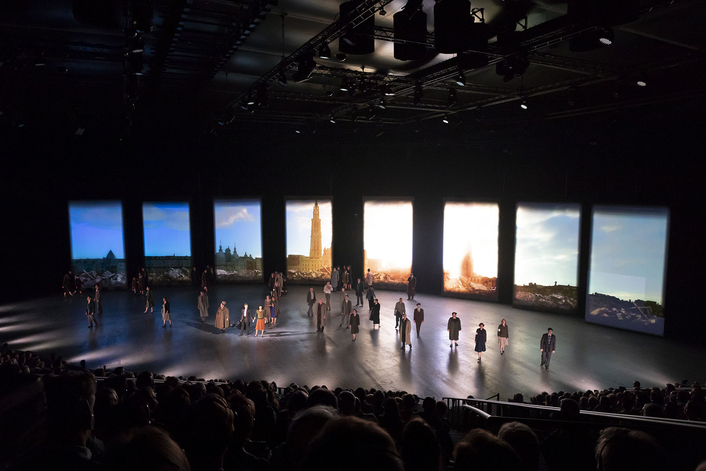