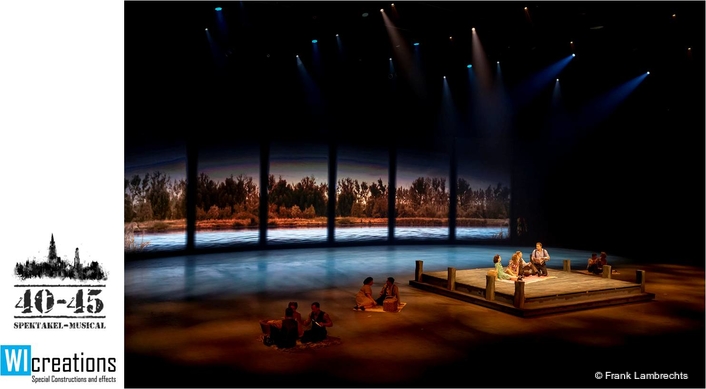 Each stand is 8 metres high at the back 19 metres long, 8 metres wide, weighs 28 tonnes when empty, and holds 209 people. The tribunes were constructed by WIcreations and each one contains around 14,000 parts, the majority of which have been custom machined.

The 40-45 production is directed by Frank Van Laecke. The artistic supervision is by Gert Verhulst, the co-founder / co-CEO of the Studio 100 Group together with Hans Bourlon, and the technical producer is Bart Caels.
The production is as ambitious as it is dramatic.

The automation concept that moves the audience into multiple positions around the substantial area throughout the two-hour show, is right at the heart of this theatrical tour de force, staged in a purpose-built venue - The Studio 100 Pop-Up Theatre - in Puurs, Belgium.

WIcreations has worked on other Studio 100 projects including their prequel to this show, the acclaimed “14-18” staged in 2014. For this they used a laser guided control system to move a single seating tribune up and down the venue in Mechelen.
This time the requirement was far more complex explained Hans Willems, CEO of WIcreations. The mission was project managed on site by WI’s Maarten Smits and Tim Lerat 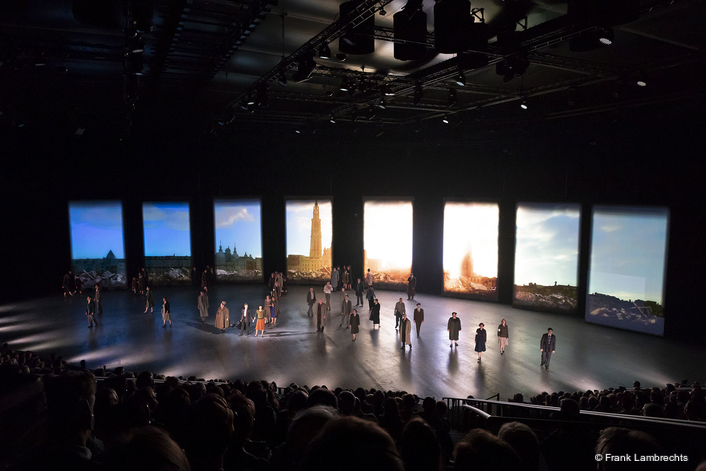 The tribunes move together or individually throughout the venue in every direction and on every axis, sometimes with as little as 20 cm between them.
This is accomplished using four custom built 11-tonne electric motor drive units per stand. Each stand’s movement is based on a 43-tonne weight loading, allowing for the extensive metalwork involved in the stands themselves, plus 75kg per person when fully loaded with audience.

A major challenge was to ensure that the 11 tonne drive units  - and not only the drive units, but the whole tribune - were silent whilst moving, a goal achieved by WI following some serious R‘n’D. These large and imposing objects glide effortlessly across the floor, choreographed to fit the show narrative and add a visceral, physical element for anyone experiencing the performance.

Large battery units are located on the underside of each stand to power the drive units and these can run for up to three shows without needing a re-charge, allowing this to be planned during the longer between show breaks.
Each stand has 48 x industrial grade wheels, with hydraulic suspension on the wheelbases to equalise and balance the weight on each wheel and keep the movement super-smooth as the tribune is rolling over the floor. 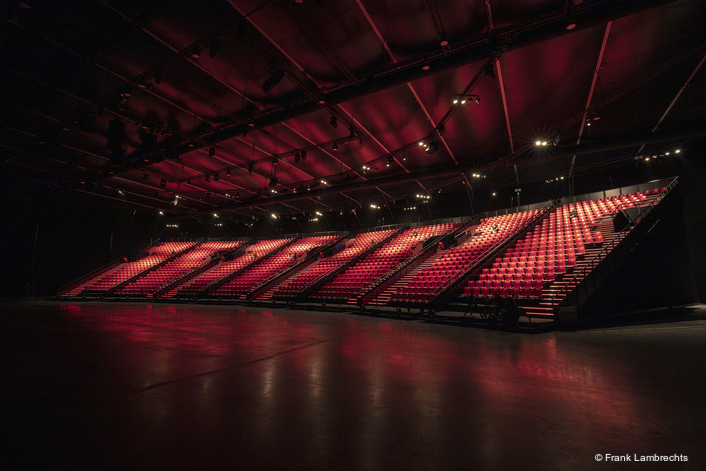 A third battery pack in each stand provides the power for some lighting elements, the RF headsets through which the audience receive the soundtrack and singing – including dubbed translations to French and English – and the essential WIFI routers which enable both the laser positioning system (LPS) and the RF headsets to function totally wirelessly.

The lasers on the stands provide information on positioning which is sent to a control cabinet located on the stand. A control desk talks to the control cabinet for each move via WIFI, and these devices adjust their positions / angles relative to 26 main reflectors installed - mostly in the roof - for the best sightlines around the venue. This allows the stands to navigate their way around.
In addition to the eight seating stands, the same WI technology is being applied to move eight LED screen trucks and two scenery wagons.

The LED video screens measure 7 metres high and 4.5 metres wide and are rigged – complete with all the processing units - on special carts constructed by WI which include a hanging structure. They weigh about 4 tonnes each and are moved using the same wireless laser guidance system as the seating stands, with video content also sent to the screens via WIFI. 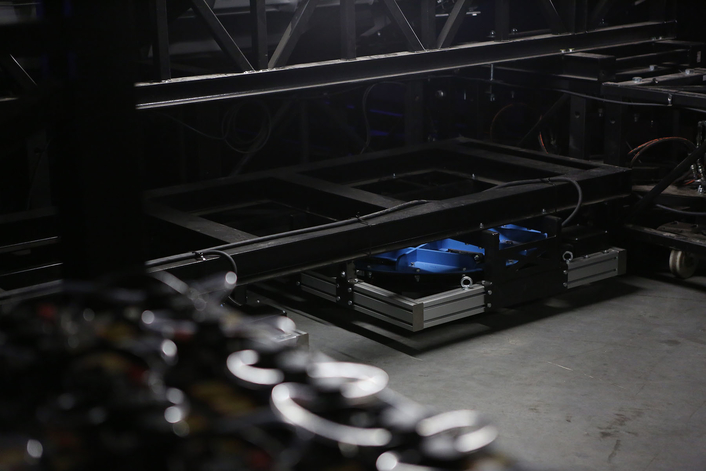 The screen trucks are physically moved by two battery powered drive units from WI’s stock products which have been in operation for several years and were used on 14-18. They were fitted with new wheel frames for this production.
The two scenery wagons also have two of these standard drive units, and they receive their positional information from a set of reflectors installed at ground level around the space. 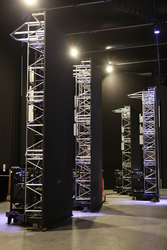 At the core of the movement control system are customised controllers which have been hot-rodded by WI. These have been programmed and are being run by Jasper Cosemans, one of the four automation crew looking after everything at the Pop-Up Theatre.
One brand new motion console deals with the 32 drive units moving the stands, while a second is controlling those on the video screens and scenery wagons. The two systems are linked through newly developed software giving the operators an onscreen map of the whole space and the dynamic locations of all the moving pieces.

The desks send data signal to a dedicated server containing a database with all the relevant co-ordinates - and E-Stop – information, accessed via the WIFI The positioning of the drive units is measured both per the individual object they are moving, and in relation / proximity to one other, and the data is beamed from a receiver next to the main server to a receiver on each of the tribunes.
The entire control system has been set up with full redundancy.

It is essential to be extremely precise when programming the co-ordinates into the consoles explained Jasper. The specific challenges here have included programming the exact moves that Frank Van Laecke has wanted, which entailed a lot of liaison with assistant director Tijl Dauwe, plus finding good positions for moving and turning the stands from one cue to the next.

Sightlines were a primary consideration, both for the audience and alignment to the laser reflectors, and all the moves had to be carefully thought out and plotted with the upcoming cues and timings in mind, as well as the current positioning.
The tribunes are moved at 0.70 mps, the screens a little faster at .75 mps and the prop wagons a positively speedy 1 mps, all of which have been deemed safe for the application. However, all objects are capable of far greater speeds than this.

As the automation control room is not in the theatre itself, each stand has a human spotter deployed to keep an eye on the moves.
By the time press night arrived, there were 76 movement cues in the desk plus preset cues with 15 scenes in total and up to five moves per scene, all of which must be harmonious with all the stage action and the music. 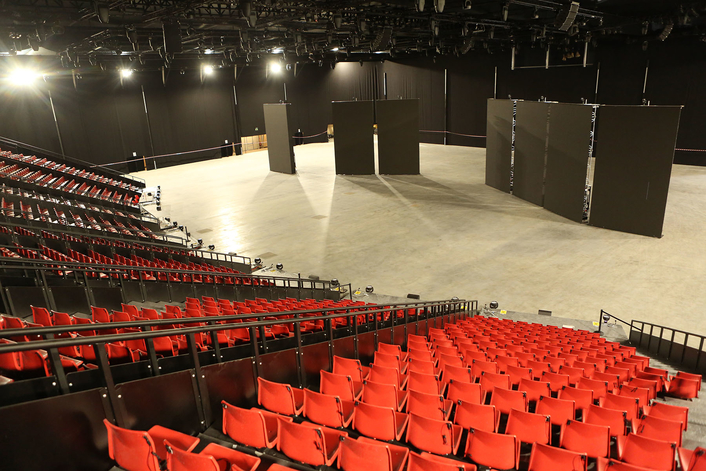 Hans Willems concluded, “It’s been a fantastic experience for us working on this production and designing the tribunes, video and deco wagons. Programming all of them together safely was the biggest challenge … and I believe it is a world first!

“Apart from being interesting and galvanising our collective skills and understanding of how to safely move large numbers of the public around a show-space, it has been great working with Studio 100, who put production values and audience experience top of the agenda. It’s also been excellent working with all the other very talented individuals – both creative and technical – and disciplines as part of this amazing performance.”

The four main technical partners involved in this production – Fish Eye, Painting with Light, PRG Belgium and WIcreations – are featured in a ‘Making of Video’ scheduled to be released soon.

Time Flies in Reverze with Wicreations!
WIcreations Are Electric
WIcreations in a Spin in Spain with Malú