Painting Darkness with Light for 40-45 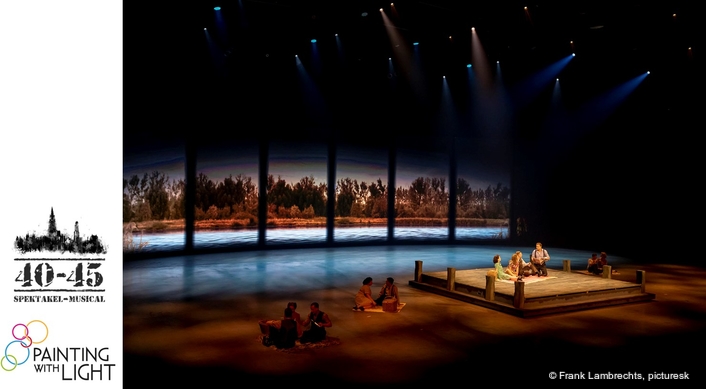 Painting with Light is both a creative and a technical partner of the ambitious new “40-45 Spektakle Musical” production being staged at the Pop-Up Theatre in Puurs, Belgium, by Studio 100 and directed by Frank Van Laecke … which is currently a huge talking and trending point.

Painting with Light’s creative director Luc Peumans is the show’s lighting and video designer, and the scenic video content was also produced by the Genk based visual design practice. The company invested over €350,000 in the purchase of the 10 disguise gx media servers which are wirelessly controlled and delivering the video to eight moving 3.9mm black-faced screens, each 7 metres high and 4.5 metres wide.

Luc comments, “It has been a pleasure to be part of this production and again be working alongside the highly talented and passionate team who also crafted ‘14-18’ in Mechelen in 2014. There have been many challenges for all technical departments, which have been met and overcome with an excellent synergy and a true spirit of collaboration. I think everyone is very proud of the end-results in creating this innovative theatre experience”.

40-45’s visceral and emotional story follows a family from Antwerp during the second world war and throws the political machinations and the human impact of war into sharp relief – a scenario with many contemporary parallels that consistently repeats itself throughout history. 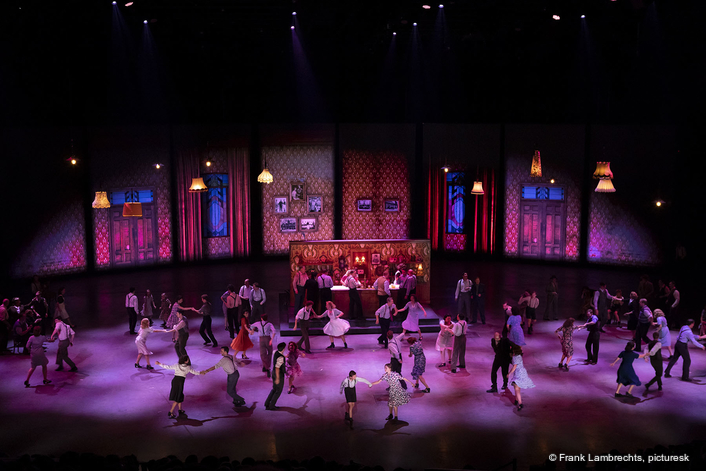 During all the initial – extensive - discussions between the creative team, the consensus was that 40-45 needed a dark and intense ambience, and this is the brief to which Luc worked with the lighting design, which was a totally different approach to that of 14-18.

Multiple locations are created all over the 75-metre square ‘field-of-play’ in the theatre utilising the moving video screens plus automated prop wagons - which had an inner circle of 30 square metres.

Lighting for all of these needed to be very tight and precise, and there were very few large overall lighting looks as there had been in 14-18, and black was an important colour for this lighting design. 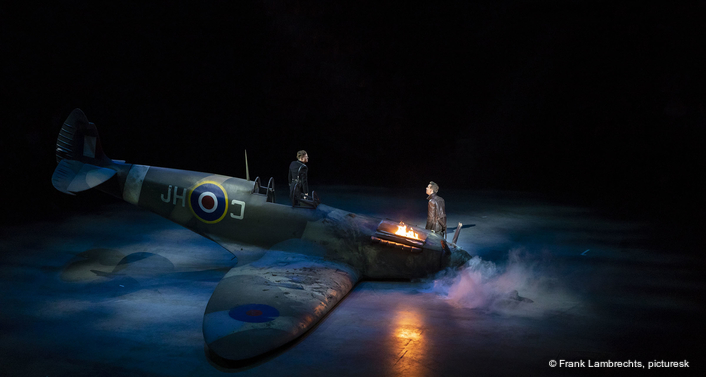 With the vast stage / floor space and the dynamic movement of the set and scenery pieces, he also had to work creatively with the negative spaces. Sometimes only a part of the screen is used to create a scene … and the rest of it needs to disappear … an added task which needed careful thought and a bit of ‘painting with darkness’ magic!

Then with the 8 seating tribunes all moving around the space … a further development of technology utilised far more straightforwardly in 14-18 so the audience literally see it from every angle in the room … he had to take a truly 360-degree approach to lighting.

So, on top of each scene being individually and darkly lit … the overall lighting scheme was completed in an in-the-round context. 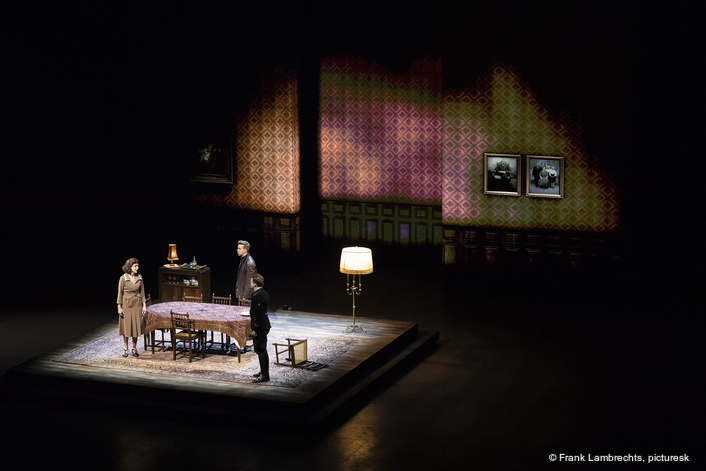 The other aesthetic challenge for lighting was that because of all the moving elements – the 8 massive 20 tonne seating tribunes, the eight imposing video screens plus the two scenery wagons – and their laser guided control system - all lighting instruments, apart from a few practicals, had to be overhead.

A mothergrid and multiple trusses are installed in the roof of the Pop-Up Theatre by lighting contractors PRG. There’s around 14 metres of headroom, which is adequate but not super high.
During the early planning stages, the playing area was defined first, which allowed Luc to start his lighting plot and choose fixture positions, which still had to be flexible as at that stage the choreography of the seating moves was still fluid and evolving.

As it turned out, all the original roof lighting positions selected by Luc stayed exactly where they were – his meticulous planning paid off and not a single physical positional tweak was needed. They just added a few positions at ground level.
Luc chose two types of lights – profiles and washes. 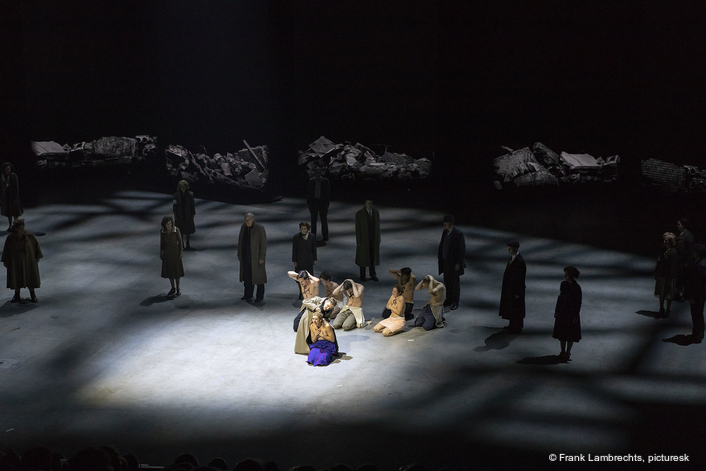 The profile is the new Icon Stage LED profile from PRG which is versatile and, due to the 8 – 56-degree zoom, can function as a wash or a profile, so Luc has made full use of this with 118 in the rig.
The general wash fixture is the GLP X4L of which there are also around 100, plus 16 GLP X4 with spill rings – a special spring-loaded device designed to move forward and rearward as the focus lens moves in and out of the fixture - at floor level with two clamped to the front of each grandstand for footlight effects.

It’s not a massive amount of lights to illuminate such a vast and epic show, however due to the dramatic construction of the work and way the scenes are played out, Luc had more than enough options.
For follow spotting they are using 12 x PRG Best Boy Spots – all rigged in the roof - running in conjunction with their proprietary remote follow spot control system, Ground Control.

Four operators each run three spots (not simultaneously) via their controllers located in a container backstage housed with all the other control systems and technical elements and they watch the action on screens.
A remote camera system installed all around the Pop-Up Theatre enables the various technical departments, plus scenic and consumes, etc., to always have a clear view of what is happening onstage. 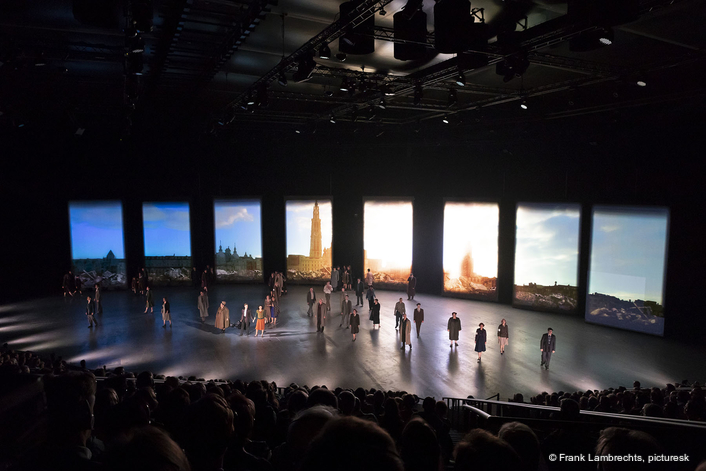 The biggest brain-teaser for the follow spot system was ensuring the lights remembered where they were as the action moves around the space, so the ‘home’ position is re-set each time there is a scene / location change.
Due to the overall darkness and scale of the huge playing space, pinpointing the pick-ups can also be tricky! PRG updated some of the Ground Control software during the technical period and IR lights were also installed to assist with this task.

The intensity colour and beam parameters of the Best Boys are all run from the console with the operators controlling dimmer and iris.
A grandMA2 light console is controlling lighting for the run of shows which was programmed by Painting with Light’s Paco Mispelters, assisted by Ivar van Dijk. Ivar focused specifically on dealing with the follow spot cues. They are running MA OnPC with a Fader Wing and a Command Wing as backup.

Eight of the new Painting with Light disguise gx servers are located on the eight video screen wagons, the ninth is used as the master for general programming and show control and the tenth is a backup unit.

Painting with Light’s video team includes Jos Claesen who was the main content creator assisted by his son Arthur Claesen as project manager. They worked alongside set designer Stefaan Haudenhuyse who presented mood boards for all the scenes from which they evolved the content.

They harnessed the realtime rendering power of Notch software to enable the various digital scenery 3D models – of the many buildings, exteriors and interiors in particular – to be lit using virtual lighting fixtures controlled by the lighting console which could be introduced into the disguise server immediately. This made the process much quicker and more flexible.

Katleen Selleslagh, Painting with Light’s video expert took care of most of the disguise media server programming, supported by Vincent Steenhoek and Hans Cromheecke. There was also additional on-site support from disguise HQ in the UK.

The Visual Act motion control system sends positional data to the media server in order to automatically visualize the positions of the LED wagons for each scene in the disguise media server’s programming environment.

This data is also sent to a WYSIWYG computer system that is used to visualize the lighting in a 3D model. This is a helpful tool for the lighting operator sitting backstage in the control booth without having a direct view on the rig.

A remote controlled and timecode programmed Panasonic camera system supplied by PFL is used to provide viewing of all the scenes back in the control booths and backstage … in all conditions and from all angles.