Garth Brooks Returns to the Stage with Bandit Lites

Garth Brooks returned to the stage in true spectacular fashion, as only Garth can, in a coordinated live concert at over 300 drive-in theaters across North America. Nothing like this had ever been seen before, and Bandit Lites provided the lighting for the special event, where more than 350,000 fans were entertained while safe in their own vehicles.

"This time, I was the fan and the people were the entertainment.  Watching people all night from coast to coast, in Canada and here in the U.S., laughing, dancing, and singing, made me smile," said Garth Brooks in a statement. "It reminded me how much I miss the crazy, happy, and unpredictable life we lead as entertainers. For one night, things seemed...right."

The event was produced by Encore Live and recorded in Nashville with a full band. Brooks’ long-time lighting designer David ‘Gig’ Butzler modified his original in-the-round lighting design from Brooks’ current world tour, all at a breakneck pace while programmer Aaron Swetland reworked the show.

“We only had a week to put this together before he wanted to load in, so without a lot of time, we used the same lighting rig. We just hung it differently,” explained Butzler. “Dizzy Gosnell was the mastermind behind all of the CAD work.”

“We had to reign in some focus positions that just didn’t work for this layout,” said Swetland. “No big deal, really. Just like an odd festival day!  Second, some of the elements of the rig didn’t fit and that forced us to create some new looks to augment moments from the missing fixtures.”

With the drive-in wall being the key focus of the event, Butzler kept the video wall the main key element. Substituting a studio venue for what is normally a massive arena meant the lighting team had to do a rare thing for a Garth Brooks show: turn the lights down. 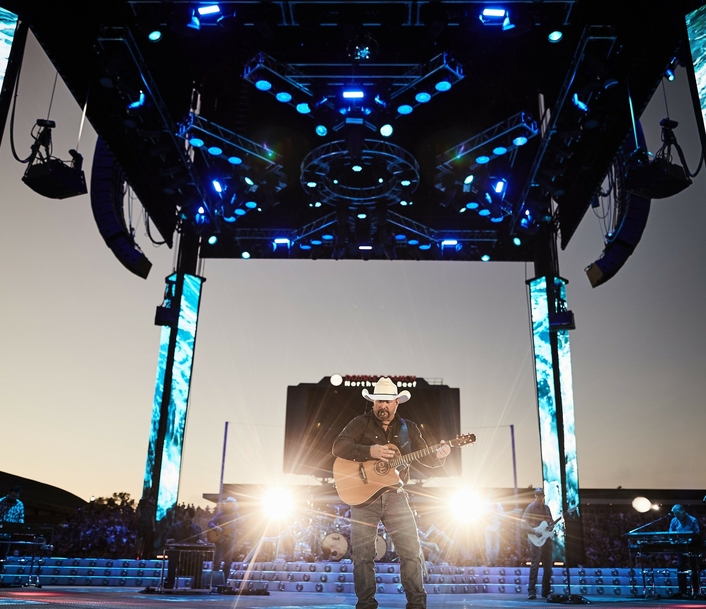 “We had more light than what was needed, but that’s the normal way for Garth,” said Butzler. “we just cheated by only having a couple of focuses that we put around the band instead of on them, but of course they walked in and out of hotspots.”

“The light masters made it extremely easy for us to keep light and follow the band,” said Butzler. “I was able to put eight units on an 80-foot truss to make it easier to key light the band. This could not have been done so easily using follow spot old school method, but otherwise everything did its job.”

With the live entertainment industry frozen, this concert not only gave music fans something to come together and enjoy, but it also provided the opportunity for Bandit to quite literally shine a light in these dark times, something that was not lost on the team. Even more important, all of Bandit’s employees were healthy and ready to go the moment the call came from Garth.

“All our team jumped in,” said Crew Chief Chuck Hastings. “I had four to sixteen extra Bandits being stagehands for everyone. We helped to put together the stage, helped the audio guys push gear and run their cable, acted as downriggers and assisted the backline guys. We put down the ‘that’s not my gig’ mentality, and made the show happen.”

“Thanks to Garth for putting this together and allowing us the chance to work again,” added Swetland. “I also want to give a big thanks to all the great Bandit LDs and techs that came out to help, from fork driving to deck slinging to spot opp-ing. They were awesome.”

“Garth called me a few weeks back about his concept for a Drive-In Tour,” said Bandit Lites
Chair Michael T. Strickland. “I thought he meant playing multiple drive-ins. He quickly told me, ‘No, not that. We will play 300 drive-ins at once!’ Only Garth! Always a trail blazer, always a leader, he comes up with this unique concept and, like all things Garth, it is a home run. The care, love, and compassion that Garth has for his fans, his band, his crew and his friends and family is second to none. In a time when we are all looking for a way to connect, Garth figures it out. Thank you, my friend, I love you sir!”