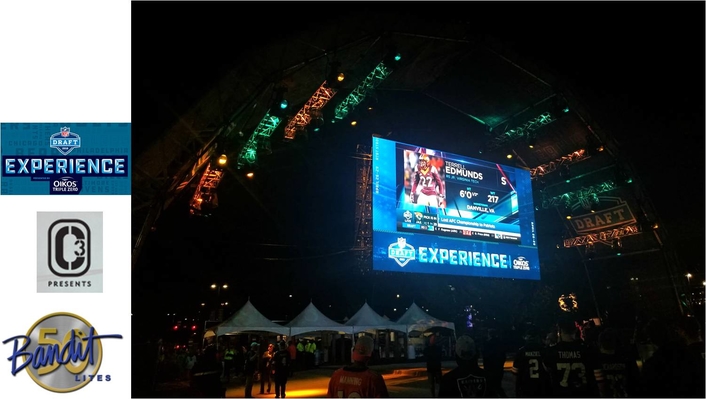 All 50 states and 32 NFL teams turned out in Texas, where more than 215,000 fans registered for the free lottery to have the chance to attend the 83rd iteration of the NFL Draft, the highest number for any draft event in its history. Bandit Lites partnered with C3 Presents and supplied an extensive lighting package for the NFL Draft Experience, held at the outdoor plazas of AT&T Stadium. The space featured interactive exhibits, games, the NFL Museum, a Pro Football Hall of Fame exhibit, virtual reality, autograph sessions and a stage for local talent, NFL team cheerleaders, mascots and drumlines.

With production talks beginning in February, Shawn Lear worked with C3 Presents Senior Production Manager Brandon Sossamon to map out a plan of attack for the vast outdoor landscape, structures and activations.

“Building on our past NFL Draft experiences and applying fresh ideas for this year, Bandit sent a crew of nine to install and operate the three semi-trailers of equipment for the week long event,” said Bandit Client Representative Shawn Lear. “The crucial aspect for Bandit’s part of the NFL Draft program is controlling multiple areas with team colors, as Bandit provided lighting systems that illuminated the corresponding team colors during draft picks at each Entry Portal Arch at the main entrances, The NFL Museum and the East Plaza. The team colors are a great visual enhance for the patrons watching on the outdoor screens.”

Bandit Lites outfitted a dozen outdoor areas with more than 550 fixtures, including the Lombardi Trophy, The Tavern, the 40 Yard Dash, the Draft Museum, the East Plaza, the Entry Portal, the Goal Post, the Music Stage, the Scott Hanson Stage, the Team Helmets display and the VT Installation tent, which featured over one hundred Clay Paky Sharpys and 42 Martin Atomic 3000 Strobes. 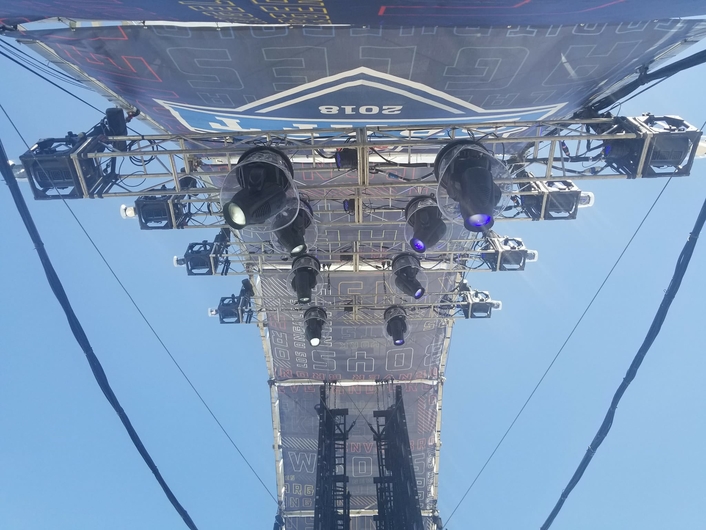 “The VT tent was a fancy, techy attraction that needed precise focus points and a tech to be on alert at all times,” noted Bandit Lites Crew Chief Ty Veneziano. “It was definitely a good tent to showcase Bandit’s attention to detail.”

“The North and South Portals were the big flashy welcoming committee of the party,” noted Veneziano. “The look made it feel like an exclusive invitation, but everyone's invited.”
The Main Entry portal was outfitted for rain or shine with VL 3500 Washes with SelbyGuard Rain Roof XLs, Clay Paky Spheriscans and GRNLite Par 64s with two Full Boar consoles, giving branded looks both to the thousands in attendance and the millions watching at home. 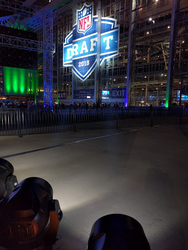 “The NFL and C3 staff were very impressed with how well the outdoor features read in team colors,” said Sossamon. “The instrument selection was spot on and delivered the end result everyone was expecting. The iconic Draft shield logo was a big hit on the networks and wouldn’t have read as well as it did without the help of Bandit and their professional staff.”

“Working with the Bandit team was extremely smooth and professional once again,” said Sossamon. “Executing the scope of work they were handed was not an easy task and of course, we had to throw some changeups at them. The guys and gals on the ground came through with flying colors by rolling with the punches and keeping a smile on their face.

With the NFL Draft a soaring success, Lear shared how Bandit Lites is immensely proud to support the event with C3 Presents, saying, “I want to thank Brandon Sossamon and his team of professionals, Alison Ray, Shawn Worlow, PJ Harrington and for their leadership making this year’s NFL Draft a very smooth operations from start to finish.” 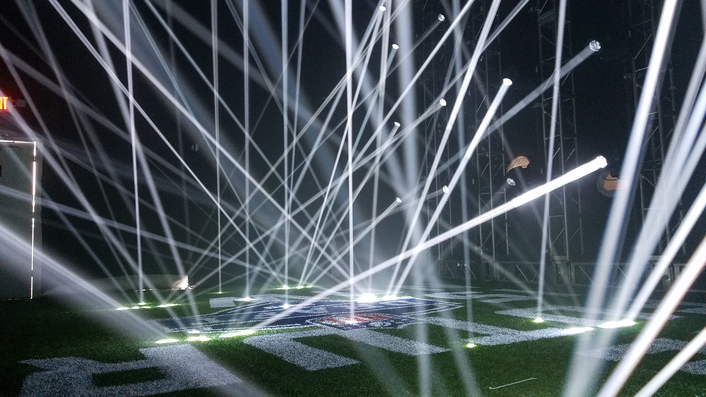