Outstanding performances both on stage and backstage
“Join Us” was this year’s motto for the Eurovision Song Contest, which was hosted on Refshaleøen island in the B&W Hallerne, a former shipbuilding hall that was specially converted into a show arena for the contest. With the Eurovision Song Contest 2014, Refshaleøen was transformed into “Eurovision Island“, and played host to a colourful ensemble of artists and ESC fans and once again set new standards for production technology and as an eye opener.

Thirty-seven countries participated; this includes the return of Poland after a two-year absence and Portugal after a one-year absence. Overall, there were two fewer countries competing compared to the previous year, making thirty-seven participants, the smallest number since 2006. Bulgaria, Croatia, Cyprus and Serbia announced their withdrawal from the 2014 Contest. However more than 195 million viewers across 41 markets tuned into the 59th Eurovision Song Contest in Copenhagen, Denmark, won by Conchita Wurst with Rise Like A Phoenix on behalf of Austria. Reach has increased with nearly 10% compared to last year, when the contest reached approximately 180 million viewers in Europe and Australia. Figures released the following day showed Eurovision generated 5.4 million tweets on social media, with a peak Twitter activity of 47,136 tweets per minute when Wurst's victory was announced

“Because we had a SpiderCam and various other rope cameras filming the stage from above we couldn’t rig any trusses below 30 metres,” explains Lange. “This meant we needed a fixture with a throw powerful enough to cover the whole 30 metres. PRG introduced Clay Paky’s Alpha Beam 1500s to me because of their solid, super concentrated long throw beam. I was very impressed by the fixtures, they were the perfect tool for the job. 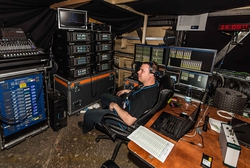 Jonas Næsby, RF specialist with Sennheiser Nordic, was on site for DR to provide assistance to the broadcaster with the microphone and monitoring set-up. “We knew that the available spectrum was very limited as 22 TV channels were already fully occupied. This made frequency planning slighly difficult – especially as wireless mics were not the only devices that needed spectrum,“ explained Jonas Næsby. “However, the biggest challenge we faced was unquestionably the hall itself.”

Skywalker-Systems at the Eurovision Song Contest 2014 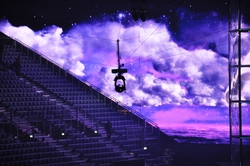 In numbers:-> During rehearsal and shows, we were flying over 300 Kilometers with the 2 systems.-> In the 3 live shows we had around 350 shots of which 90% where already preprogrammed to the precision of a centimeter-> A total amount of 2000 meters of rope were moving through the venue while both rigs were flying into action! 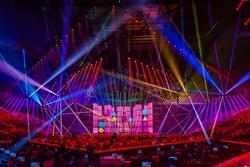 Lange stated: “On a system of this size there is really only one control choice today – the grandMA2. The console allows multiple users to access the same show file simultaneously. Also we had the great advantage of MA 3D, both for pre visualisation and for blind editing on site. We were quite surprised to experience a stunning 25 fps with the full rig visualised!”

Not a Bad Seat in the House at Eurovision 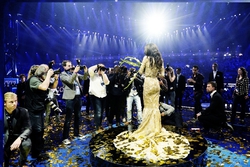 Eight projection screens measuring 6.5m each and 130 flat panel displays were installed in the auditorium, green room and off-stage areas, to ensure waiting contestants and the audience didn’t miss a single note or vote from the show. Mikkel Behrend, Rental Manager at AV CENTER, said, “In close collaboration with Panasonic, we managed to meet the organiser’s high expectations by providing a reliable, state-of-the-art technology solution at an extremely competitive cost. We hope to work with Panasonic again when delivering such visual solutions for large-scale events. ”Karoly Neumann, Nordic Country Manager for Panasonic, said, “The event is watched by over 170 million people at home, but for the 11,000 people who get to watch live, it’s important that they feel part of the action.