Entering the House of Horror 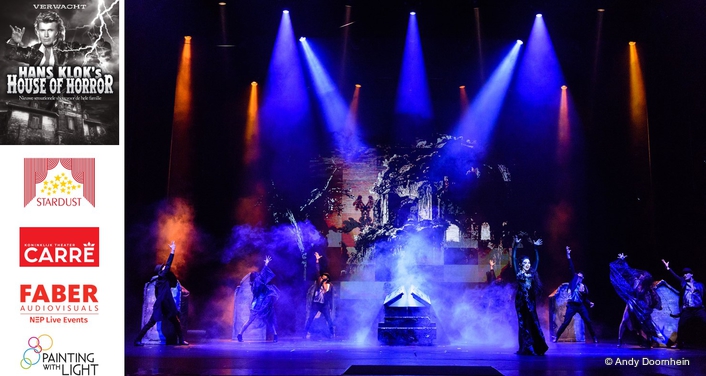 The tour is currently scheduled to run until January 2017. It will also return to the Carré in October 2017.

Belgium-based show design practice Painting with Light has created innovative and highly effective lighting and video content for the current tour by Hans Klok, the world’s Fastest Illusionist, who is presenting his grisly ‘House of Horror’ show! The spectacle, produced by Stardust Circus International, which combines the drama and theatrical gruesomeness of Gothic horror with quick witted and fantastic illusion art, was launched at the Royal Theatre Carré in Amsterdam, the Netherlands, where it enjoyed a hugely successful seven-week run before going on the road.

The action includes mind-boggling special effects that help transport audiences into a strange world where nothing is as it seems, as Hans Klok’s House of Horror tests and exceeds the limits of the genre of ‘illusion.’ The epic-scale family horror show offers a cast of freakish and fantastical characters together with the Master of Magic!

Luc Peumans, commissioned as light and video designer, led the Painting with Light team which utilized one of its new d3 Technologies’ media servers to great effect to help produce some gripping video special effects.  They evoke the mystical world with many gruesome tricks and twists as Klok is pursued relentlessly by a pack of master illusionists from the past seeking to protect their realm of secrets.

The story unfolds in many different rooms and spaces around the House of magician Cordoni, who conceals the biggest secrets of all!

Cordoni has seduced other magicians into his house, made them disappear and kept all their illusionist acts in his ‘magic book.’  To become the greatest illusionist of all time Hans has to survive his visit to the house and combat Cordoni by executing 15 illusions in three minutes, a world record and the reason he’s known as  ‘the world’s fastest Illusionist’!

Art director and costume designer Jan Aarntzen produced the overall visual and set design and delivered a clear brief to the Painting with Light team about what they wanted to achieve in looks and atmosphere with video and lighting.

Two LED screens are integrated into the set. Upstage is a 12 metre wide by 7 metre high surface made up of Glux 10mm, selected for its light weight and carbon fibre frames, which are extremely quick and easy to assemble. 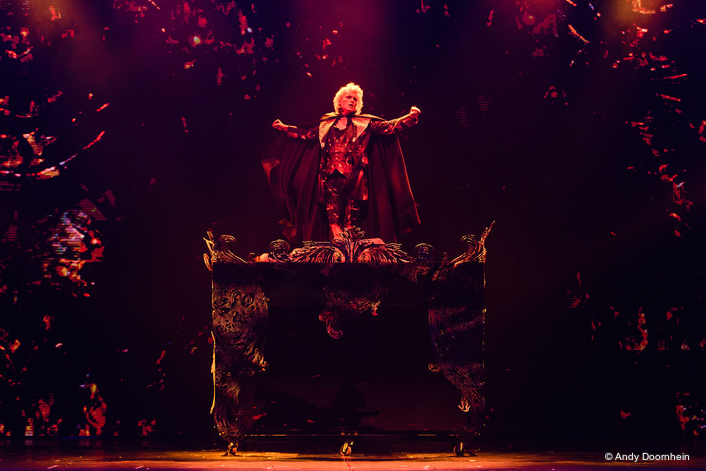 Four metres downstage of that are six pairs of 8 metre tall by 2 metre wide legs, stage left and right, set 15 cm apart upstage and downstage for the show but also manually movable on a tab-track system to mask scene changes taking place behind.

The video visuals are instrumental in supporting the show’s narrative so Painting with Light brought in video artist Jos Claesen to co-ordinate the content creation team.  He and Luc worked together on this year’s K3 tour (Belgium’s most famous girl band) and over two hours of original content was produced from scratch.

For this show, they developed a graphic style inspired by the work of 18th century Italian artist Giovanni Battista Piranesi, renowned for his grimly fascinating fictitious ‘prisons’ with their impressive detail, intimidating walkways and staircases and foreboding darkness.

The strong black and white precision of Piranesi’s work featured prominently in the graphic material, while all the shapes and contours of the video – some of it animated – were tweaked to match the set.

Jos worked closely with Painting with Light video artist Sina Sohn.  The artwork was created in multiple layers so it could be fine-tuned and manipulated live during the show.

A newly purchased d3 Technologies 4x2pro media server, supplied via Benelux distributor FACE, was specified as the most flexible and stable solution for storing and playing back House of Horror’s media elements.

Painting with Light made its first investments in d3 equipment this year and became a d3 Studio partner available to offer expertise and specialist knowledge on the d3 platform to any projects utilising this powerful and versatile technology. 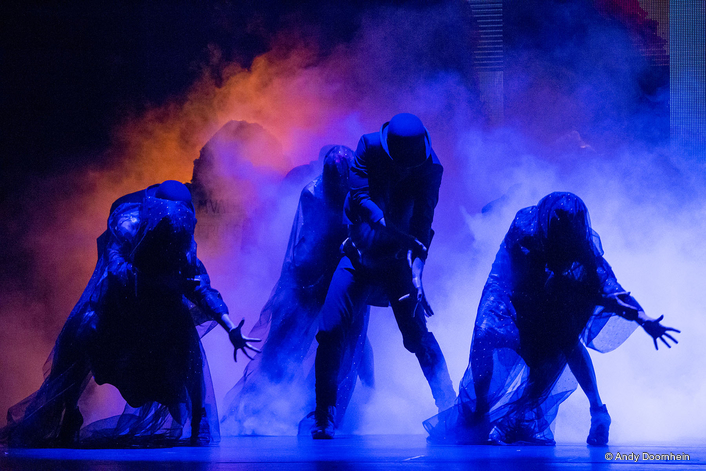 This show required maximum fluidity in the workflow and the ability to edit right up to the last minute.  According to Luc, d3’s “flexible and intelligent” timeline programming, “together with the pixel precision, superior mapping features and the quality of the image produced” made it “the best choice” for the production.

The d3 was programmed by Painting with Light’s Katleen Selleslagh.  Luc and the entire team – Jos, Sina and Katleen –  appreciated d3’s pre-visualisation capabilities, which were invaluable during the many House of Horror video brainstorming sessions as they prepped and reviewed the content.

The whole process started at Painting with Light’s studio facilities in Genk, Belgium.  Then it moved to the production rehearsal facility, a former factory space in Klok’s home town of Ijmuiden, for the last week.

Subsequently, they moved the d3 and full video visualisation package plus WYSIWYG, for a final week of intense programming and editing on site at the Royal Theatre Carré before the premiere.

“Using the visualisation, we could look at all the footage and see exactly how it would appear onstage, onscreen from multiple angles and positions,” Luc explains.

The d3 system running the video cues is triggered partly by timecode and partly manually by the grandMA2 lighting console operated on the road by Stefan Hegteler.

Lighting, as you might expect, is fundamental to this show, not just for creating a classic sense of Victorian melodrama, but also for revealing and concealing.

“Lighting itself had to be part of the illusion concept, which was extremely interesting and also challenging,” says Luc. 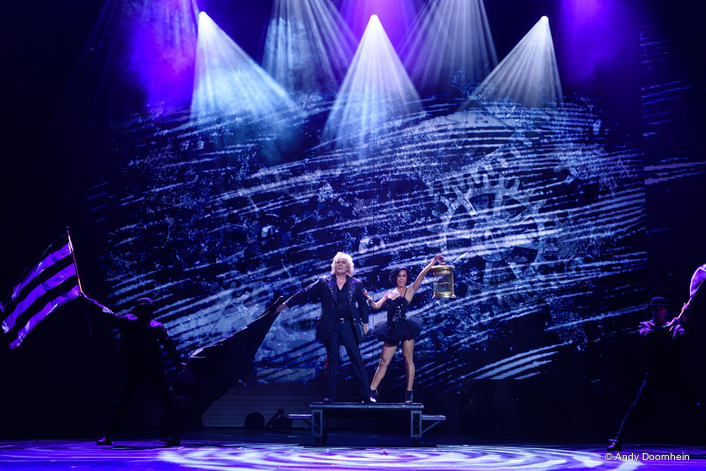 Lighting was designed with the demands of touring in mind: It needs to be practical and manageable to rig on the morning of the first show in the case of multiple dates and able to deal with the odd back-to-back booking on the itinerary.

Twenty-eight Robe DL7S LED profiles are the backbone of the rig chosen as good and strong all-round theatrical fixtures with some great gobos and excellent colours and quality of light.

They are augmented with 24 Robe Pointes deployed on side ladders and used for the many punchy effects, their small size and multi-functionality being key.

Twelve CycFX 8s are used to light a voile in front of the upstage video screen and also used strategically as a light curtain.

Twenty-five Clay Paky Sharpy Washes are scattered around for side and back light, their small dimensions and tight beams used for highlighting and to showcase some of the more architectural looks.

Atomics are the strobe of choice for high impact and scary moments and 24 Tour Pro Fireball 1212 LED PAR – RGBAW + UV black, which works extremely well – are dotted around the stage and auditorium to enhance the black light tricks.

The package is completed with a pair of Robert Juliat Aramis follow spots. Lighting is supplied by Flashlight from Utrecht. 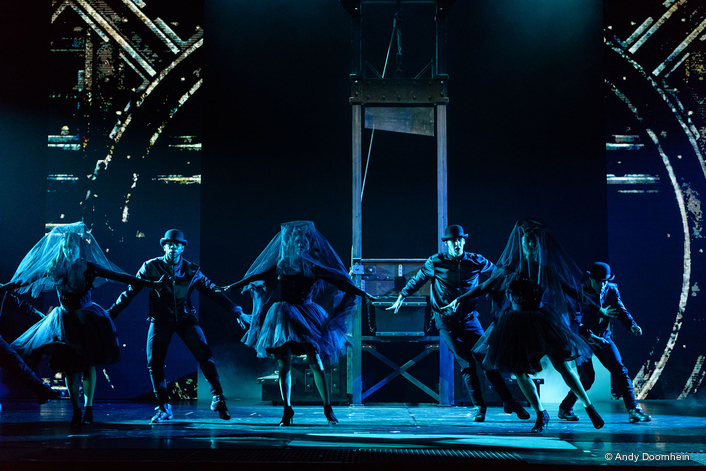 The many technical challenges included fitting the production into the circus-style format of the Royal Theatre Carré while designing it to be adaptable to multiple venues.

The programmer was Arjan Grootenhuis for Painting with Light. The LED screen and video hardware is supplied by Faber Audio Visuals, part of the Dutch NEP Group.

The tour is currently scheduled to run until January 2017.  It will also return to the Carré in October 2017.