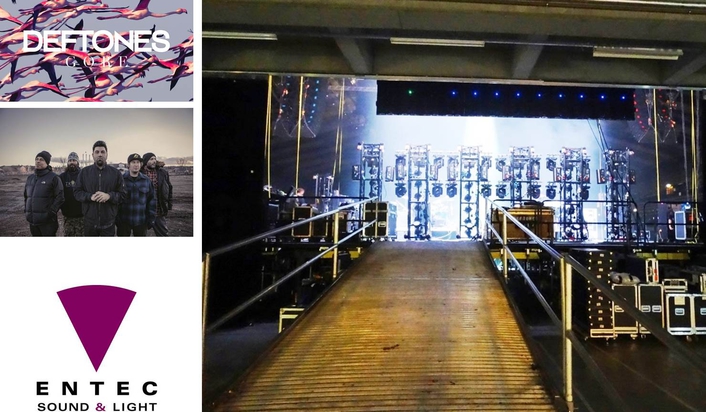 US alternative rockers return to Europe after Paris tragedy

Direct from a highly successful tour at home in America, alt-metal stars Deftones arrived at Wembley’s SSE Arena at the beginning of June to play a large scale one-off show prior to a series of European festivals including Germany’s Rock Am Ring and Rock Im Park, Greenfield in Switzerland, Download in the UK and France, and Iceland’s Secret Solstice, with lighting support from Entec throughout the run.

Currently riding high in the charts worldwide, Gore, the Sacramento band’s eighth album, was released just months after the Paris terrorist attacks that came on the eve of Deftones’ scheduled performances at the ill-fated Le Bataclan venue.

Andy Tinsley, Deftones’ production/tour manager and FOH sound engineer, explained: “Three of our party were actually at Le Bataclan on that tragic evening last November but left before the shooting happened. We were due to play there on the next three consecutive nights so if the terrorists had moved their plans back by 24 hours, it would have been us on stage.

“We had booked our lighting with Entec for a European tour that also included Wembley and some German club dates, but as a result of what happened the tour was cancelled. We’re now circling back to do honour some of those dates within our festival and it’s great that we are able to complete the job with Entec this time. Noreen O’Riordan [Entec’s lighting manager and managing director] was originally excellent to work with but she’s absolutely killing it for us now, while crew chief Will Wright has really nailed the technical side.”

Tinsley, who has previously toured with the likes of Alkaline Trio, Rise Against, New Found Glory and Mastodon, came into the Deftones’ camp two years ago “to fill in” and was soon asked to stay on full-time.

He commented: “The current show is very similar to what we toured around the States just before we came over and our lighting designer/operator Jon Eddy runs the hell out of the rig. You’re always limited by how many lights you’ve specified but Jon seems to make all of them work in a way so that they’re creating different looks all night. He never runs out of steam.”

“This is getting bigger and bigger with every tour,” said Jon Eddy. “It’s very gratifying that I have had complete control of the design since I started with the band two and a half years ago, and they’ve been very happy with what I’ve done.

“It’s a fun rig – the Sharpys and the Magicblades would have to be the key fixtures for me on this tour. Of course, the Sharpy has really become an industry standard. I have 24 of them in total, upstage, downstage and on the floor, and I’ve been treating them more like spots lately. The Magicblade is a cool, relatively new product that I haven’t used until now. I can do windmill effects with them spinning in either the vertical or horizontal plane at a speed that matches the Sharpy.

“The band and the management wanted to have a wall of old school lighting, like PAR cans and blinders, like they’re performing in front of the sun! I then specified some newer technology to integrate into that mix, particularly the fixtures that I enjoyed using and threw some colour scrollers and strobes in there for the punch.”

Eddy, who toured with Marilyn Manson in between the most recent Deftones tours, refrains from focusing light directly in the faces of the band members, preferring to concentrate on rear and side lighting. While the MAC Aura XBs were particularly useful in providing a side wash across the stage and lighting up the backdrop, high output Viper Profiles contributed a low-key wash with gobo projections for the set’s ‘darker’ songs.

Another key element of Eddy’s design is Entec’s supply of eight Total Fabrications moving light LAD trusses that are used as upright floor lighting towers – six at the back and one at each side. Along with Eddy’s choice of console, an Avolites Pearl Expert Pro, these form the basis of the festival lighting package that will tour with the band during June.

“I have these trusses loaded with the same fixtures that are flown – there’s a bit of everything as well as a vertical bar of six PAR cans,” commented Eddy. “On the floor I have 200 Watt Fresnels as footlights or key lights for the band members because they like that classic, warm style of uplighting.”

Before loading in at Wembley, Deftones’ LD spent some time at Avolites’ HQ to learn some aspects of the manufacturer’s latest software for the Pearl Expert Pro. Eddy explained his loyalty to the brand: “Avo was my first language as a lighting operator. I learned on an old Pearl when I started messing around with lights and grew with that desk. Little by little, whenever I had the chance, I also plugged away on grandMAs so that I had that ability under my belt if gigs ever required that of me, but my Avo remains my preference. I know that I can roll into any festival with this desk and have total confidence that I will get the job done.”

Eddy’s favourite songs to light are ‘You’ve Seen The Butcher’ [from the album Diamond Eyes] and ‘Rosemary’ [from Koi No Yokan]. He says that some of the new songs from Gore, such as ‘Prayers/Triangles’ and ‘Rubicon’, have also been enjoyable to work on.

Mirroring Tinsley’s positive comments, Eddy reserved much praise for Entec’s service. He said: “It’s my first time with Entec and they have totally knocked it out of the park. They had our rig completely prepped for Drew Johnston, my touring lighting technician, and he’s very happy. For a company that doesn’t exclusively trade in lighting, Entec’s ability to respond with all the gear I asked for – especially the Magicblades – really earned my respect. That doesn’t always happen with some of the lighting companies I’ve used in the States so it’s been great to find it here in the UK.”

Entec’s crew on Deftones’ Wembley show also included Wil Gregory and Aamir Riaz, with R Jameson Event Transport handling trucking. Deftones return to the United States at the end of July and their forthcoming plans include a series of shows this November in Australia where Gore recently made it to No.1 in the album charts.