Entec’s Will Wright project managed and co-ordinated all the prep work for the lighting department and Mark ‘Magic’ Ellis-Cope did the same for all the sound elements.

Entec’s account handler Noreen O’Riordan commented, “When Richard Ames requested that Entec quote for both sound and lighting equipment, I knew that this would be a show ideally suited to our equipment inventory and skills. Having one supplier really benefitted the logistics of a 4 band arena tour … without any tech or rehearsal day!”

Lighting
Will created a production design based on the requirements of all artists, two of which – The Drifters and Dionne Warwick had their own LDs in Al Johnstone and Debbie Fowler respectively. Simon Honnor was asked on-board to light Mary Wilson, while Will himself operated the board for Roberta Flack.

All four artists were co-headliners, so Will studied the basic kit specifications from all of them and produced a rig designed to give plenty of stage coverage with added specials and effects. The plan was that this would be adaptable and ‘general-purpose’ enough for all to use and make their own artists shine and look distinctive with a blend of classic and contemporary lighting touches.

The rig all had to be based in the air as floor space needed to be left completely clear to allow the different backing bands’ backlines to be set up on a series of rolling risers … and quickly and efficiently changed over, roll-on-roll-off festival style.

Will’s plot comprised three lighting and one backdrop truss with two wing trusses coming off the back one, which also had drop arms to give the lighting positions more depth and variation, and to allow for some shaping dynamics. 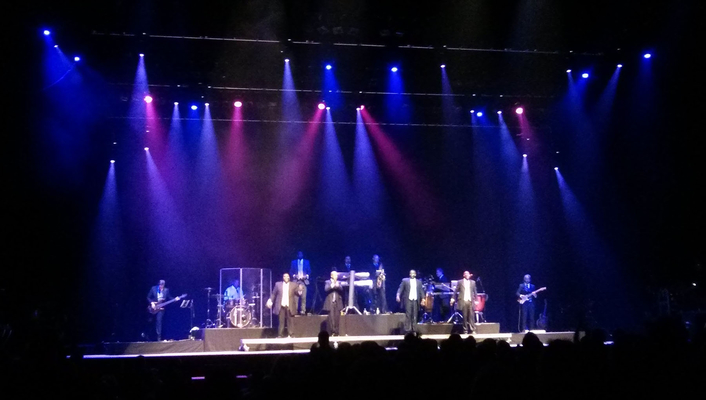 Lighting fixtures were designed to work in pairs or groups as this enhanced the general texturing and patterns that could be created, with 16 x Clay Paky Alpha Spot QWO 800 Spots on the back truss and 8 x Martin MAC 700 Washes. They were joined by five bars of 6 PARs in a nod towards the vintage warm tungsten looks that would have been the norm in the 1960s and 70s.

He added two strings of ACLs for retro rock-out and anthemic looks, “paradiddle flash moments” as he calls them – on the back truss.

The mid-truss featured a third string of ACLs together with two MAC 700 Spots and four QWO Washes.

Moving forwards to the front truss, this was loaded with another five bars of 6 PARs, 8 x QWO Washes and 6 x QWO Spots, plus four 8-lites long the front rail for illuminating the audience.

Sixteen ETC Source Fours also graced the front truss as all the artists required specials, an old-skool lighting look that has withstood the test of time beautifully.

The chosen backdrop – after some deliberation agreed on by all – was one of Entec’s P-light starcloths.

For control, the console was an Avolites Tiger Touch with a Payback Wing.

A major achievement was keeping the floor completely clear – not just of lighting but cabling and other infrastructure and bits that might have impeded the path of the rolling risers. Especially with monitors both sides of the stage, the lighting department had to be a bit creative with their cable management!

There was no pre-production time, so the first day was extremely busy and full on, but by the second gig – with an experienced and knowledgeable crew all familiar with the venues – it was already running like clockwork!

The loudspeaker arrays were designed using d&b’s ArrayCalc simulation software, particular attention was focused on using d&b’s new array processing for all of the arrays which optimises every speaker cabinet in the system to get a fabulous, smooth and even coverage across all the auditoriums.

A lot of D80 amp channels … but worth every penny of Entec’s ongoing investment in the d&b brand and the new technologies it offers.

Sixteen J-SUBS were arrayed on the floor, d&b Y10ps and Y7ps were used for in and out fills.

The FOH console was an Avid Profile 96-channel which ticked all the boxes on all four of the technical riders, and this domain was looked after on the road by Geoff Curtiss.

Two Yamaha PM5D monitor consoles were set up either side of the stage, as one act specifically wanted to be mixed from stage right. Entec’s own Kevin Smith did the majority of the monitor mixing utilising a combination of 14 d&b M2 wedges, a Y-SUB for the drummers plus eight channels of Shure PSM1000 IEMs which were split between all four acts and backing bands.

Entec also supplied a full mics-and-stands package including a selection of Audix, Shure, AKG and Neuman KM184s and six channels of Shure UR4 handhelds for the vocalists.

All the radio elements were powered by Fischer Amps rechargeable batteries, which is saving substantial battery disposal at each gig and is one of Entec’s ongoing initiatives to ensure the gig is as ‘green’ as possible.