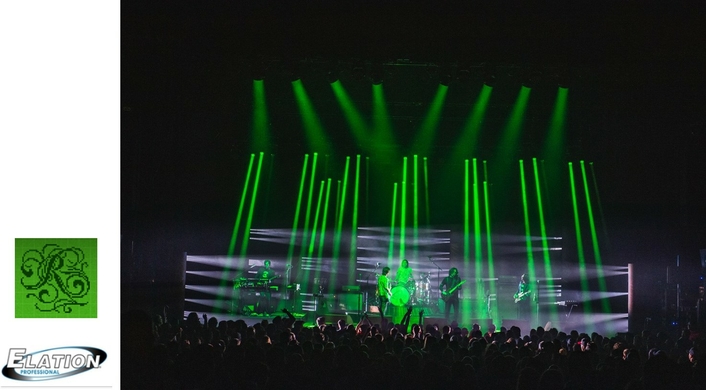 White, known as a dedicated yet somewhat unconventional artist, is widely credited as one of the key players in the garage rock revival of the 2000s. “He is completely focused on the music and performance and wants to keep the audience very focused as well,” explains Larivée, who also worked on Jack White’s most recent solo tour. “He wants to make sure the audience is getting a good experience so there are no cell phones allowed during the show (phones are collected at the door by a company called Yondr). There is also no set list. It’s really driven by Jack. If he feels the crowd is not reacting well he will switch songs or even switch instruments mid song if it suits him.” 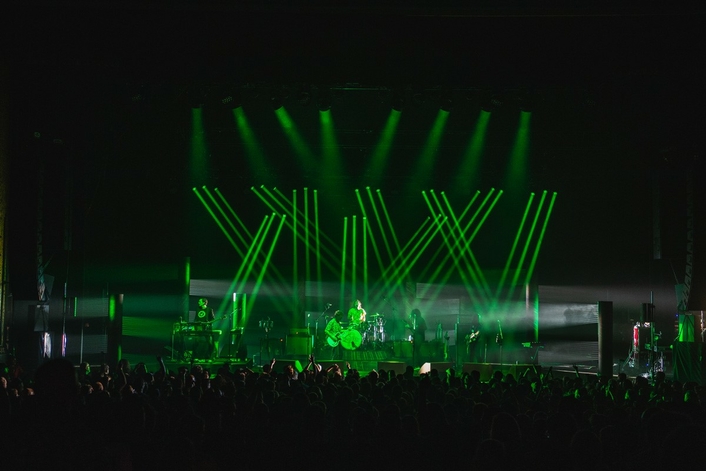 Larivée says the danger in not knowing what the band is going to play could have a lighting op punting every song. That would make for a random look that the designer says he wanted to avoid. Working with lighting director Michelle Sarrat (2019 Parnelli Lighting Director of the Year), who was also with Larivée on Jack White’s solo tour, about 30 songs from their catalog were programmed with the flexibility to make changes and additions.

With reference to fixture choice, Larivée explains, “I wanted something dynamic to play with as it’s a very dynamic band. On the floor we’ve got big columns with LED strips hidden behind production as ground support and I wanted something above that. I was looking for a small fixture and was pretty amazed by what the DARTZ could do. There’s a lot of action in that small fixture.”

By grouping three DARTZ together to form a small pod, the designer created a uniquely flexible fixture that could work together as one light or separately for more dispersed looks. “We have 30 fixtures in groupings of 3 but it is basically like having 10 fixtures,” Larivée says. “There’s a lot you can do with these lights and when they rotate 360 degrees it becomes very powerful. In fact, when we rehearsed and had the DARTZ going nuts during one of the songs, the people at rehearsal applauded the lights. I’d never experienced a lighting fixture get applause before.” 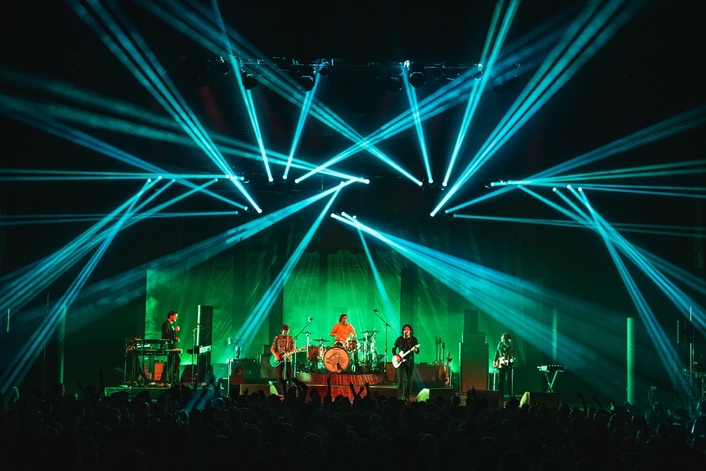 Larivée uses the DARTZ for a variety of looks to keep up with the energy and improv sensibilities of the band and says he shows something different with them all the time - musical punches, chases, rotation, beam looks, multi-pattern effects with prism, washes with frost engaged. “It’s really a one-of-a-kind light. They are also reliable, which is very important, and have held up great.” Operating from a ground-supported system, the DARTZ are mounted on 10 tripods made up of 2-ft pipe and are quick to hang. “Upstaging was great at supporting and finding a way to tour with those pods,” Larivée adds. 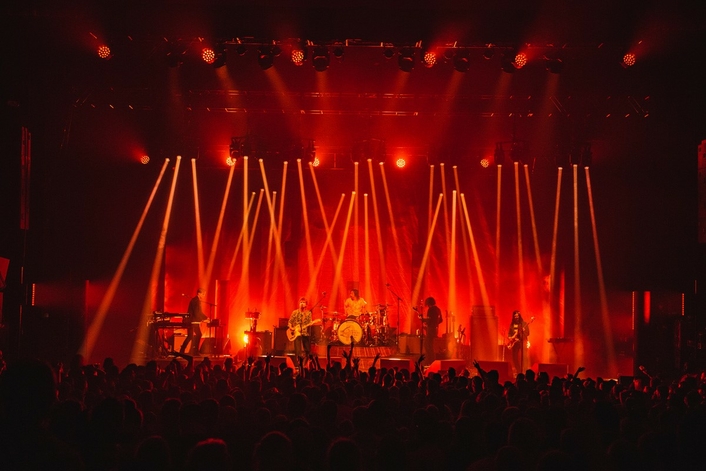 White has enjoyed both critical and popular success during his career. The 12-time Grammy Award winner is careful to maintain an aesthetic and frequently color-codes his projects. The red and white color scheme of The White Stripes is well known, with White’s solo performances always in blue light. With The Raconteurs, the colors are just as minimalist but a more unconventional copper and green. “Some guitars are copper and the audio wedges, pillars and backdrop are copper, but copper is hard to get with lights,” says Larivée, who uses a dark amber and green with white punches every now and then. “Jack has definite opinions as far as color I think because he wants the audience to dive into his world and experience.” 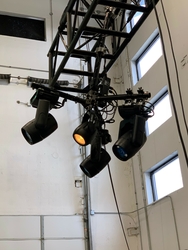 Energized after a decade’s hiatus, The Raconteurs play an aggressive set on the current outing where everyone is genuinely in the moment, audience included. The tour started in May in Europe with North American dates beginning in early July, many sold out. The tour continues until November with final shows scheduled in Mexico and South America.

About Elation Professional
Based in California with a European office in The Netherlands, Elation designs and manufactures a comprehensive range of innovative lighting and video products known for its superior performance, excellent efficiency, and outstanding price:value ratio, all backed by a hard-earned reputation for Total Support. Through nearly three decades of intelligent lighting development, our mission has always been simple: to provide best-in-class products and service while offering the best value:performance ratio in the industry, helping show designers and producers achieve their vision. From discharge to LED, intelligent to conventional, Elation products continue to be a part of the industry’s most exciting projects across the globe and our list of references is always growing.