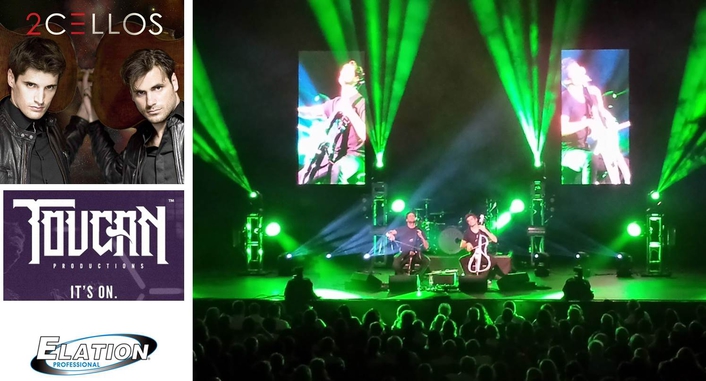 .
Cello concerts and head banging don’t usually occur in the same building unless of course you’re at a 2Cello’s concert complete with a rock ‘n roll lighting design and dynamic lighting effects by Elation Professional.

Out on a spring U.S. tour, 2Cellos is a unique cello duo that combines training in classical music with youthful rock energy to present an unforgettable concert experience. Riding a wave of popularity – the band even played with Elton John recently at his residency in Las Vegas – 2Cellos are selling out shows at every stop.

Lighting designer for the 2Cellos U.S. tour is Chris Maguire, who has over 25 years of touring experience under his belt (Ted Nugent, et al) yet admits that at first he wasn’t quite sure how to light the more untraditional band. “It’s just two cellos and a drum kit and there are big stages to fill,” he says. “But they play everything from Bach to AC/DC, Nirvana and Iron Maiden and it’s very much a rock ‘n roll show, which was easy for me as I know all about rock show lighting. I’ve scared a few blue-haired ladies on this tour and I’m sorry for that but it’s not a classical concert.”

Chris designed a floor package for the U.S. tour that includes Elation Platinum Beam 5R Extremes, Platinum Spot 5R Pro’s and Cuepix Panels along with other lighting, all supplied by Toucan Productions of Oklahoma City. Used for everything from slower, more subtle looks for classical songs early in the show to bigger rock looks for numbers like AC/DC’s “Thunderstruck,” visually the show has changed dramatically from previous years and now, says Chris, looks more like a full production.

The floor package consists of six short truss towers in a semi-circle from downstage left to downstage right with Platinum Beam Extremes mounted on top of each. “I love the way they look and think they’re amazing,” he stated of the powerful light with a 3° sharp pin spot beam. “The beam is tight and the gobos look great, especially when you use it with the prism.”

Platinum Spot 5R Pros are used for color and mid-air effects from a floor position on each side of the drum riser while Cuepix Panel LED matrix blinders mounted on the truss towers are used mainly as audience blinders. “Most of the theatres we go into are blown away by the Cuepix Panels,” Chris says, “because they’re often looking for something for audience-type lighting and the color temperature of the panels is amazing. They’re the same temperature as a Mole Lite, a great little unit that strobes and also draws less power.”

The set is clean yet visually stunning and backed with two LED video screens with video direction by Jorge Muñoz. 2Cellos FOH Engineer Miro Vidovic, who has been with the band since the beginning, helped Chris create the looks the band wanted. “He was a big help in making this happen,” he says. 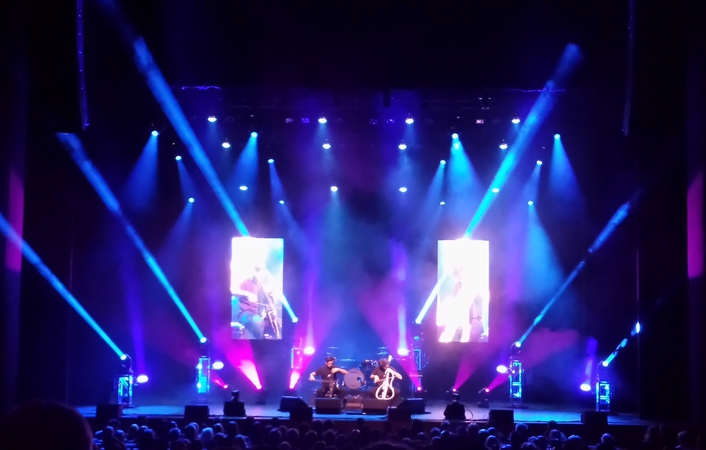 Chris has used Elation on tours in the past including his designs for Ted Nugent, who he still regularly tours with. “Ever since I started using Elation products they remind me of some of the workhorse products of year’s past,” he commented. “The units are small, lightweight and powerful and I’ve never had an issue with them on any tour I’ve taken them out on. I take care of them, put them up myself and just love the product.”