Formed back in 1980 Depeche Mode have had an incredible career. Since the release of their debut album Speak & Spell in 1981, they have had 50 songs in the UK Singles Charts, 17 top 10 albums in the UK chart and have sold over 100 million records worldwide. For their current Depeche Mode Global Spirit Tour, Front of House engineer Antony King has chosen an L-Acoustics K1 system, supplied by UK rental company Britannia Row Productions.

Depeche Mode have worked with Britannia Row for more than a quarter of a century and this longstanding relationship with the company and the pristine equipment it provides gives peace of mind to both the band and their engineers, who are certainly putting it through its paces, with the stadium tour starting this past May in Europe and concluding in March 2018 in South America. 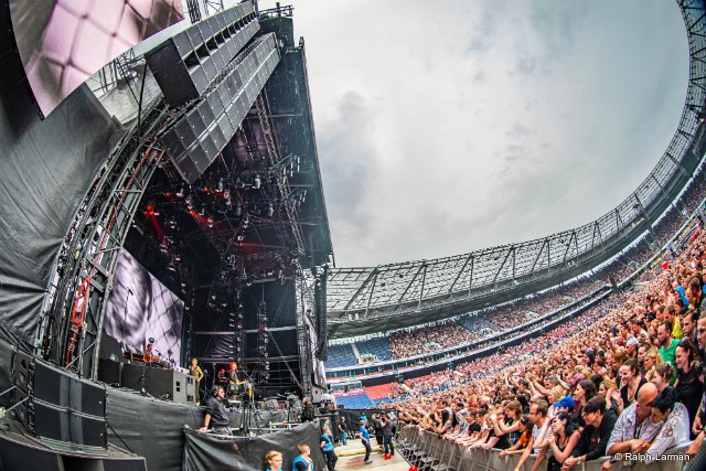 The Global Spirit Tour uses 14 K1 per side for the main system, with four K2 as downfills, with 12 KS28 per side flown next to the K1.

With the tour playing over 90 dates in stadiums and large-scale venues around the world, a system that provides accuracy and reliability was needed. L-Acoustics K1 was the ideal choice and Antony specified a main system that comprises 14 K1 per side with four K2 as downfills. Side hangs are a further 14 K1 plus six K2 downfills, to account for the throw distance needed and the large amount of vertical coverage required. There are a total of 46 KS28, with 12 of them per side flown next to the K1, whilst four hangs of 12 K1 are used for delays, all mixed via an SSL L500 Plus. 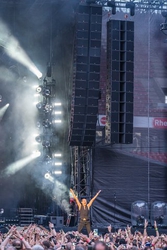 Depeche Mode’s set design always includes a thrust that sits to one side of the stage. Because of its asymmetrical construction and the position of camera platforms, there are restrictions to where the ground stacked subs can be placed.
The solution is to have 18 of the remaining KS28 configured as six stacks of three sitting in front of the stage, arrayed as a sub arc. Three ARCS per side are stacked on the outermost KS28 stack and four stacks of two Kara each on the innermost KS28, which are deployed as front fills. Two Kara per side are used for stage infill and, whilst the band are all on in ear monitors, a further two KS28 per side are sited on the stage to provide them with a little movement. Delays are four hangs of 12 K1.

“There was originally talk of flying some K1SB as well as the KS28,” explains Terence Hulkes, FOH tech and crew chief. “However, because of rigging points and weight loadings, that wasn’t possible, but the flown KS28 spread the power around the venue better and keep it above the heads of audience. For overall low end and extra register the KS28 is amazing and it’s incredible how much the low end will travel.”
“K1 itself isn’t lacking in the low-end department, so in this instance we went for resolution rather than moving the air,” adds senior systems technician Richard Trowe. “For the really trouser flapping stuff, the KS28 is the one to have. 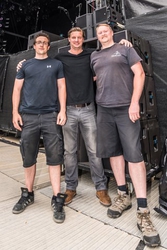 Antony wants consistency,” he continues. “He likes to have a similar volume at the furthest seat as at FOH and he likes to walk the arena from top to bottom to make sure he’s got that. That’s where the FIR filters and LA Network Manager really help; when you’re a distance away from FOH and you need to increase the HF with the air compensation, you can do it using a tablet. Obviously, we can’t always achieve perfectly even coverage, in these large stadiums but we get pretty close. For example, there were legal noise restrictions in Switzerland, but even there we had 0.7db difference between the front row and FOH and the same between FOH and the back of the arena, which is next to nothing.”
The team also appreciates the speed and ease of the L-Acoustics rigging system.

“The rigging on the KS28 in particular is very fast,” smiles Terence. “The way it goes up and down is the fastest of any PA I’ve rigged. Because the stages are high enough, we have big amp carts that hold all the LA12X amplifiers, mains, controllers etc , there are 32 LA12X on one side and 33 on the other, in two carts that roll in under the stage. We plug in the mains, link the audio networking inputs into it and away we go.”
The newly launched LA12X has made a noticeable difference to the sound of the system, particularly when it is being driven hard. “Running the system on LA12X gives us so much extra headroom and great sound, all the way from the beautiful round low end to the precise and crystal clear highs,” Terence adds.

For me, K1 is the only serious choice for stadiums, given its superior throw capability and high directivity control,” Antony concurs. “K1 on the new LA12X amps takes the system to a new level.”
To make life even easier, L-Acoustics David Brooks provided plans for venues that they did not have information on.
“Having David send the plans so we can prepare the design using L-Acoustics Soundvision in advance enables us to do a better system design, as well as be a bit more relaxed and better prepared,” Terence concludes. “The combination of the system’s ease of use and sound quality, along with the help that L-Acoustics has given us is making the tour a breeze, which is exactly what we like.”
The tour is now heading over to the US. Brit Row will continue to provide sound for this, and all legs of the tour, which continues into 2018.