Solotech’s K1 and K2 loudspeaker arrays are flown higher and wider than usual due to the tour’s complex staging requirements
On her first tour since 1994, Bette Midler is still keeping it larger than life. The “Divine Intervention” tour, which began May 8 at the Hard Rock Live in Hollywood and finishes up July 19 at the O2 Arena in London, UK, brings 14 musicians onstage, including a dancing five-man horn section, as well as her longtime backing trio, The Staggering Harlettes, and plenty of costume and set changes, one of which involves a lip-shaped couch on casters. This is Midler's first global tour in over a decade and is promoting her October 2014 album, It's the Girls! What it also brings is sound as real as Bette herself. 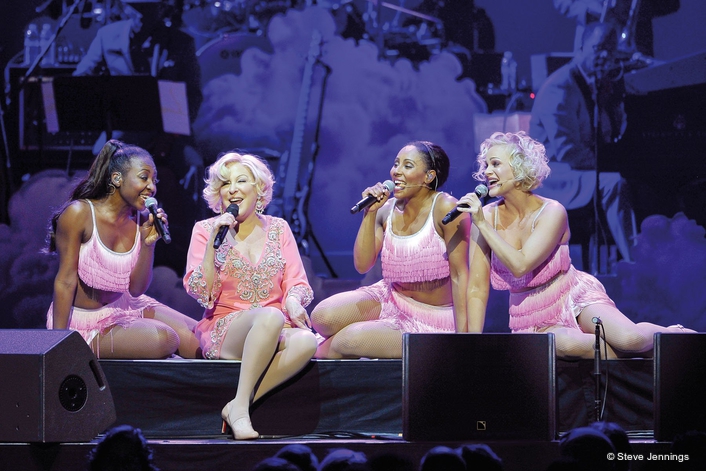 Because of the complexity of the production taking place on stage each night, the sound system has to be flown higher, and the left and right hangs of the system need to be positioned wider apart, than would be typical for these types of arena shows. That would be a significant challenge for most sound systems, but not for L-Acoustics.

Guest says that he and System Technician Frédéric Cantin use the time before and during sound checks to fine-tune the system in each new venue, using the wireless capability of L-Acoustics’ LA Network Manager and its powerful toolset, including the Array Morphing tool for tonal balance adjustment, to assure optimal sound throughout the venue. “After I get the sound exactly as I want it at the FOH position, we can move to different seating areas and tune system to allow each area of the venue to experience what I experience as I mix the show,” says Guest, who has mixed Midler’s live shows in the past, including some during her 2008-2010 residency at Caesars Palace, as well as tours for artists including Janet Jackson, Ricky Martin, The Backstreet Boys and David Bowie. “I can’t put the boxes exactly where I’d want them on this show, but L-Acoustics gives me the tools to compensate for that.”

Cantin adds, “The great thing about the L-Acoustics enclosures is that they sound great right out of the box. They are very, very musical, and that helps us with challenging situations like these can be.”

The system—comprised per side of 14 K1 and four K2, as well as eight flown K1-SB and four SB28 floor subs, 16 additional K2 as side hangs, three coaxial 8XT and one 12XT front fills, three Kudo side fills, and three more 12XT for onstage monitors, all powered by 51 LA8 amplified controllers loaded into 17 LA-RAKs—hasn’t failed to amaze both audiences and Guest himself. 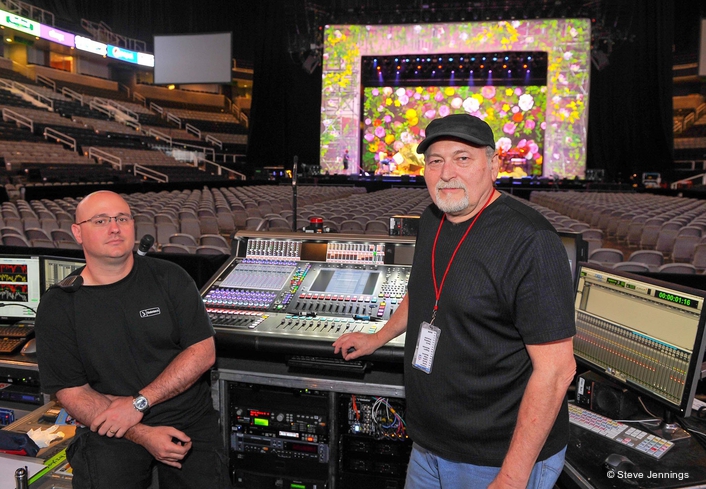 To illustrate, Toronto Star Music Editor Nick Krewen described Midler’s June 20 concert by writing, “Someone should track down Midler’s live sound engineer for the secret of making the Air Canada Centre sound so clear and pristine—it transformed a good show into a great show. If he can work that magic, he should be hired as a consultant to other acts visiting the venue, the sound was that crystalline.”

“It blows me away some nights,” Guest agrees. “I have a lot of experience with the V-DOSC system, but this is my first time with the K1 and K2 and they are incredible. I’ve always wanted to have the same kind of experience mixing a live concert that I have when mixing in the studio, and this is the closest I’ve ever come to that in an arena. What surprised me was the fidelity—what comes off that stage is what comes through the PA. It’s the best tool I’ve ever had in an arena environment—the software lets us predict how the system will be at its best in each venue.”