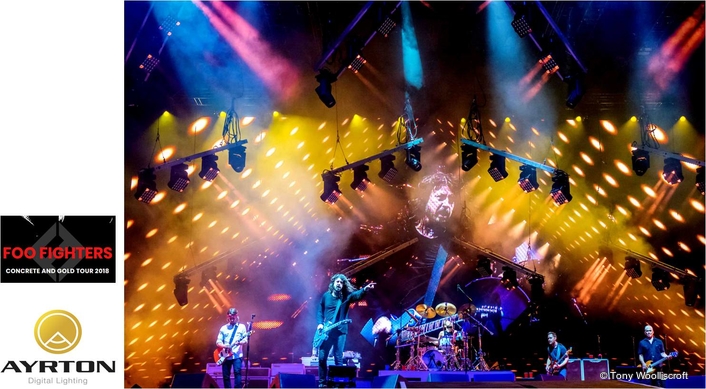 Iconic American rock band, Foo Fighters, have recently wound down their 18-month Concrete and Gold world tour which launched back in May 2017 at BottleRock Festival in Napa Valley in support of their 9th studio album released in October 2017. The Concrete and Gold tour has played literally every size and type of venue: stadiums, arenas, amphitheatres, surprise club gigs and festival headlines – including the famous Pyramid Stage at Glastonbury.

“I think we’ve done somewhere around 120 shows all told,” says the band’s long-term lighting designer and director, Dan Hadley. “We even had a week in April where we did an amphitheater followed by a stadium, followed by a festival, followed by an arena!”

Foo Fighters are well known for the length and dynamism of their shows and this, often, 3-hour long extravaganza is no exception. The responsibility falls to Hadley to keep the visuals incredible and exciting enough to match the energy onstage.

To help him achieve this, Hadley’s lighting rig gives prominence to 36 Ayrton MagicPanel™-FX square faced LED fixtures rigged on twelve floating ladders that move to constantly reconfigure and reshape the architecture of the stage. The rungs of the ladders swing freely so that the MagicPanel-FX fixtures maintain their vertical orientation at all times, from where Hadley uses them as dramatic sources of illumination to form strong aerial effects, linear patterns, run graphics and shapes across the face of each fixture and, importantly, as powerful audience blinders – lead singer Dave Grohl likes to see his audience at every opportunity! 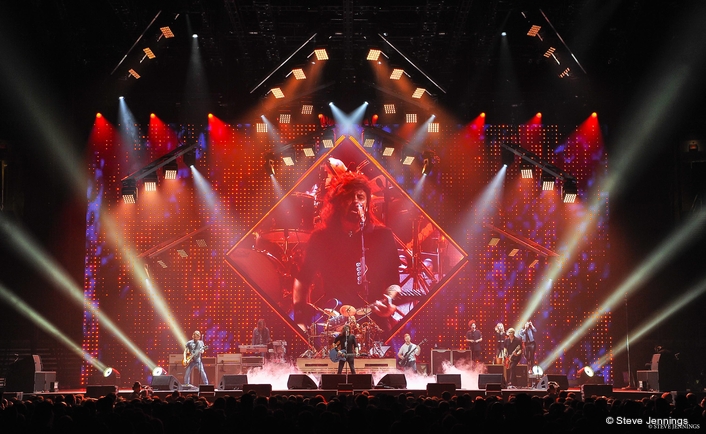 The tour was split into two legs which required two different designs, both of which incorporated the MagicPanel-FX. “For the first leg the MagicPanel-FX were mounted low in three static trusses in a sort of horseshoe configuration,” says Hadley. “In the second design we had them grouped on flying lighting ladders above the stage where they change position throughout the show.  These two designs were very different due to the parameters of the tours.  The first one, with the static trusses, was used for a few months of, mainly, festivals where the schedule was very tight and we had to be able to set up and get out in very short time.  I also wanted to keep this one low on budget and number of trucks, so any fixtures we were going to carry needed to pull their weight. Happily the MagicPanels definitely have a presence and enough flexibility that I was able to get them do perform multiple tasks so we could keep the amount of kit to a minimum to speed up installation and minimise truck space.

“After that tour finished we started the full production tour for the new album. For this the square shape of the MagicPanel-FX fitted perfectly into the geometry of the album art and our video configuration, so keeping them was an easy choice to make, especially as they’d also performed so well on the first leg.”

Hadley has used Ayrton fixtures to light the Foo Fighters before, notably MagicDot-R which he used to encircle the ‘Iron Throne’ that famously carried Grohl on stage after he broke his leg, and MagicBlade-R for the 2015 Sonic Highways tour, and is also familiar with the MagicPanel range.

“I chose the MagicPanel-FX for Concrete and Gold for a few reasons,” he says, “mainly for the sort of visual motion you can get out of the pixels and how it adds a dynamic element similar to video, yet also serves to illuminate the stage. Although MagicPanel-R also did this very well, the addition of the zoom in MagicPanel-FX made it exponentially more useable as it gave more control of the architectural element of the beam. Being able to get a tight column of colour when zoomed in and then be able to produce a very soft star-field type twinkle while zoomed out in the next song is pretty remarkable from the same fixture.”

Hadley made full use of the dynamic nature of the overhead grid, shifting the trusses to form shapes that mimicked the diamond-shape video backdrop, or splitting them out into irregular arrangements and even creating circles on the faces to blend in with the content on the upstage LED video wall. 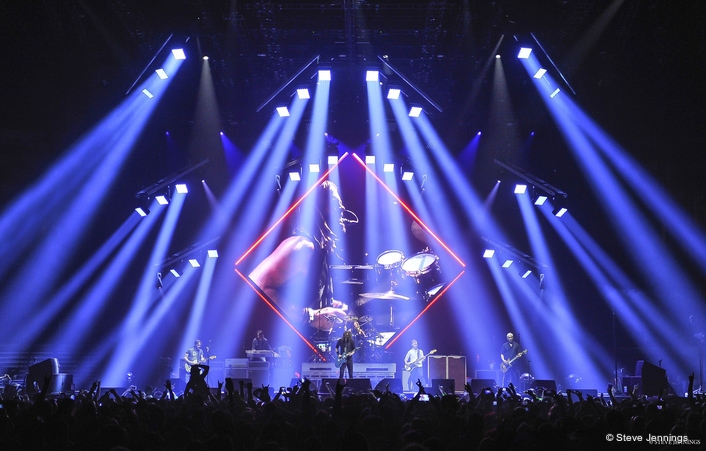 “I was able to get some very nice gradient colour fades across the array of them, some sweeping animation that works great,” he says. “I only use one or two of the MagicPanel’s built in macros in the show, everything else is custom built and has its own feel for the song. I was even able to easily replicate the album’s new ‘FF’ logo during one song, because…well, why not?”

Hadley programmed all the lighting himself and operates the show on a Grand MA2: “The band is pretty loose with the setlist and never plays to any track, so I have to keep things relatively busky,” he says. “This translates into most of my effects having speed faders so I can keep up with the changes they throw at me. The MagicPanel-FX are all in extended mode so I have maximum control over their function, limited only by my own programming time and creativity - both of which run out before we’ve milked the rig dry of options!”

Hadley admits to having a few favourite features on the MagicPanel-FX beside its unique zoom: “There are a few moments when I’m able to mimic what the video content is doing, particularly in one song when there is an ‘infinity mirror’ type array of lights with a ‘virtual’ PAR can rig on the upstage LED wall when the MagicPanels become 3D versions of what’s on the 2D screen. It gives me the ability to bring the 2D content into the 3D realm quite easily, which doesn’t happen often with more conventional fixtures.”

The MagicPanel-FX fixtures were supplied PRG for the whole global tour as part of the full lighting package and have proved both reliable and easy on the maintenance. “They’ve been possibly the least problematic moving fixture on the tour, which may be due to or in spite of the fact that they live on their ladders,” confirms Hadley. “The amount of dust that has settled on the top of the units is a testament to how often we’ve had to replace any of them - which is to say, rarely.”