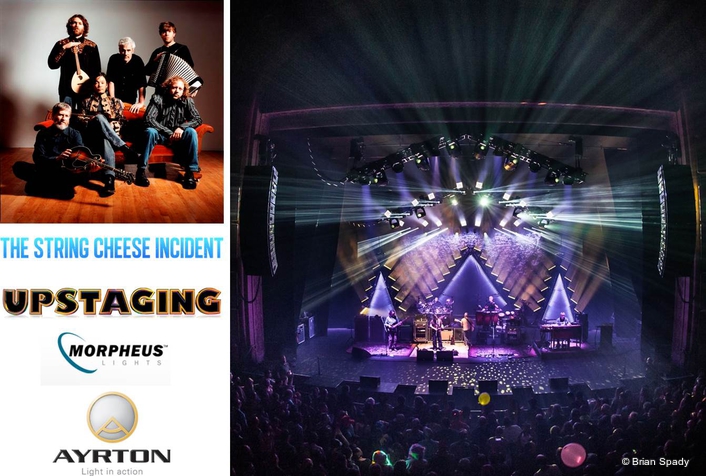 .
Lighting designer, Andrew Cass chose Ayrton MagicPanel™602 and MagicBlade™-R LED fixtures for his dynamic lighting of The String Cheese Incident which toured the US from late summer 2014 to early 2015.

The String Cheese Incident is a Colorado band with an eclectic style that encompasses elements of bluegrass, rock, electronica, calypso, country, funk, jazz and more. Cass put together a vibrant and colourful lighting design which reflected the variety and dynamism of the band’s diverse style. “Colours are my signature - I’m an over-saturated guy! - and the band give me free rein to do what ever I want,” says Cass. “The artists like my saturated colour and it is appropriate for their music. There are not many moments during their set when non-saturated colours fit.”

To help achieve this level of intensity and variety, Cass turned to the ever-versatile Ayrton fixtures with their unique blend of continual movement and broad colour spectrum.

The award-winning Ayrton MagicPanel™602 is a moving head LED beam projector equipped with thirty-six 15W Osram RGBW emitters in a 6 x 6 array.  Each emitter projects a tight, powerful 7.5° beam and can be controlled individually or used collectively to produce a coherent 15,000 lumen shaft of light, using only 600W of power. The emitters can be pixel mapped or driven by video. To supplement the graphic possibilities this control provides, MagicPanel™602 can be continuously rotated on both pan and tilt axes, which adds a dynamic dimensional effect to beams individually projected by mapped emitters.

MagicBlade™-R delivers a totally new, unique design having seven independent RGBW LED sources arranged in-line. Paired with the intensive angle of its 4.5° optics, MagicBlade-R creates light curtains with a genuine overall consistency and, like MagicPanel, offers continual double rotation on the PAN/TILT axes. MagicPanel 602 and MagicBlade-R are controllable via DMX-512 (with RDM capability) and Art-Net. 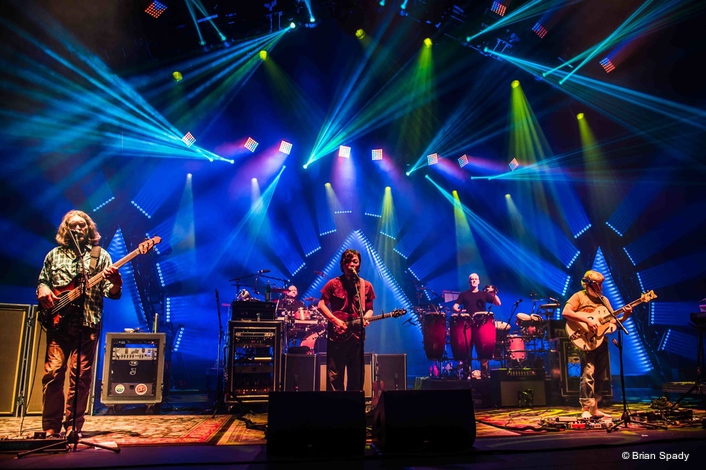 “I have been using Ayrton MagicPanel™602 since it was released in 2013,” says Cass. “The fixtures made a big splash in the EDM scene and I used them at a number of festivals including Electric Zoo where we had over 80 units in the festival rig. For The String Cheese Incident I had 16 MagicPanels rigged on the overhead grid, just behind the band, so I could use them as backlight, eye candy and audience blinders and to create some great aerial effects out there in the smoke. But this tour was my first time using the MagicBlade which I chose for its linear alignment and unique motion capabilities.”

Cass’s motivation for his design was to return to the band’s bluegrass origins and create an ingenious rig that was suggestive of mountains. “To do this I wanted a non-circular moving lantern which would enable me to outline the mountain concept with linear moving fixtures.” Cass achieved this with 36 MagicBlade-R units evenly spaced on trussing behind the band to outline three triangular mountain peaks.

“So many of the band’s songs - for example Spinning Round the Wheel of Life and Sirens - are about continuous motion which I was able to accentuate using the MagicBlade and MagicPanel continuous pan and tilt features,” says Cass. “Ayrton is the only manufacturer to have truly succeeded in this unique movement.”

Cass also chose the MagicPanel and MagicBlade fixtures for the individual and isolated quality of each beam of light as projected by each collimator and the high ‘pixel’ count they afforded him. “I ran my own video content using Art-Net merging through the fixtures to create texture and moving colour so I needed as many pixels as possible with as much individual brightness as possible. MagicPanel 602 gives me a 6 x 6 matrix to work with and the more panels I have, the more pixels I have to play with.” 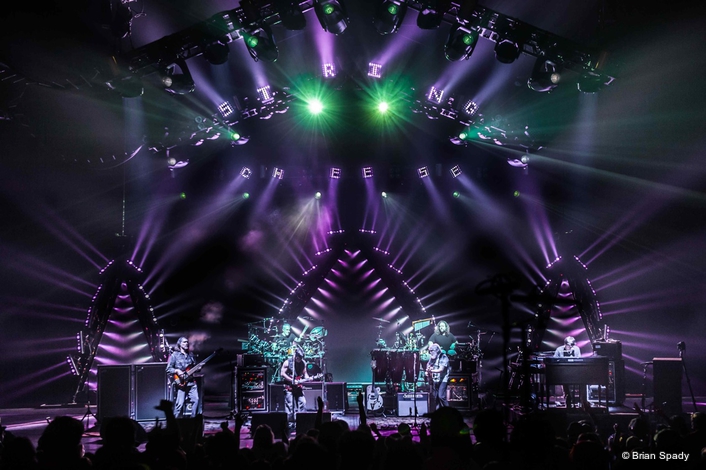 The show was a mixture of rehearsed numbers and improvisation which called on Cass to switch between moments of pre-programmed states and busking. “I tended to use the MagicPanel and MagicBlade fixtures in the pre-programmed sections because it gave me the luxury of really getting into the intricacies of the fixtures and using the individual pixels to maximum effect. It is worth taking a little while to learn to get the best out of the movement, colour and pixel opportunities, especially when using all 160 channels, because after that you can get such a lot out of them.

“I love the scope the power of these units give you, they are really bright! On this tour we were mainly playing theatres so I could tone them down to 75% or even 50% as needed, but when we play festivals I can push them up to full power and really rock it out. It’s also great that they have proved so durable on the road – and we really beat them up! We take them on outdoor festivals and we programme them to move a LOT so they really have to work hard! If they break for anyone, they’d be breaking for me!

“I’m very happy with the MagicPanel and the MagicBlade,” concludes Cass. “I am always looking for a light that looks different from the rest of the industry, now I can’t wait to try the new Ayrton NandoBeam™-S6 which I’ve just seen in the online demo.  And I’m looking for the right design and application to try out the IntelliPix™ – nothing else does what that thing does!”

The Ayrton MagicPanel and MagicBlade units were supplied for The String Cheese Incident Tour by Upstaging, Inc.

Ayrton’s range of LED lighting products are distributed exclusively in the US by Morpheus Lights.