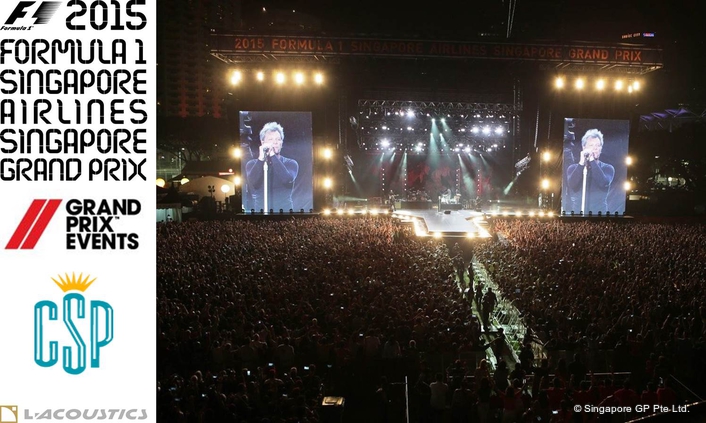 Increasing industry demand for larger format and network capable systems led Singapore-based CSP Productions Pte Ltd to search for the next generation audio system to add to its inventory. They settled on a combination of L-Acoustics K1, K2 and Kara as their perfect combination.

“The final decision to purchase the L-Acoustics K1 System was made after much evaluation of current market offerings,” says CSP owner, Kenny Heng. “A combination of key factors such as rider demand, manufacturer relations, technology, sonic characteristics, usability and inventory integration were strongly considered. Our selection of the L-Acoustics K1 system was logical because of our long-term relationship with L-Acoustics and our familiarity with their products, having been the exclusive V-DOSC country partner for Singapore and Malaysia for the past 15 years.

CSP used the new system for the first time at this year’s FORMULA 1 SINGAPORE GRAND PRIX’s live music events. One of only two night races in the annual Formula 1 calendar, the Grand Prix naturally attracts huge attention in the Asian country, with a number of associated events providing entertainment for the thousands attending the Marina Bay Street Circuit.

The venue was a purpose-built arena in front of Singapore’s National Arts Gallery, which is surrounded by the racing circuit. CSP was contracted to provide the technical production and chose their L-Acoustics system to deliver seamless, high quality sound across the 100m wide x 220m deep audience area.

Using L-Acoustics Soundvision software, the audience area was modelled to produce the system design. The main system comprised 14 flown L-Acoustics K1 as well as 12 K1-SB and three Kara per side, complemented by eight ground-stacks of four SB28 subs, with a dV-DOSC on each stack for immediate front row coverage.

“The top K1 were aimed at a distance of 100m, with the near audience covered by the Kara downfills,” says Zulkarmain Muhammed, the system engineer for the event. “The K1SB were flown next to the K1, which enabled us to enhance the low end contour and extend the frequency response of the system down to 30Hz, while minimising the low frequency build-up on stage.”

Two sets of delays comprised two arrays of eight K1 to extend the coverage to 160m, with the second comprising two arrays of eight V-DOSC deployed to cover the remaining 60m. Two Kara below each K1 delay catered for the audience near the LED screen mounted on the same structures, with eight SB28 subs added to extend the frequency response. Each V-DOSC delay was also complemented by four SB218 subs.

The full system was powered by a total of 64 LA8 amplifiers, which were connected to an L-Net network for remote control and monitoring via L-Acoustics LA Network Manager.

Performers throughout the race weekend included headliners Pharrell Williams, Maroon 5 and Bon Jovi, with the L-Acoustics system proving its worth by delivering exceptional sound throughout the arena, but minimising spill because of the city centre location. 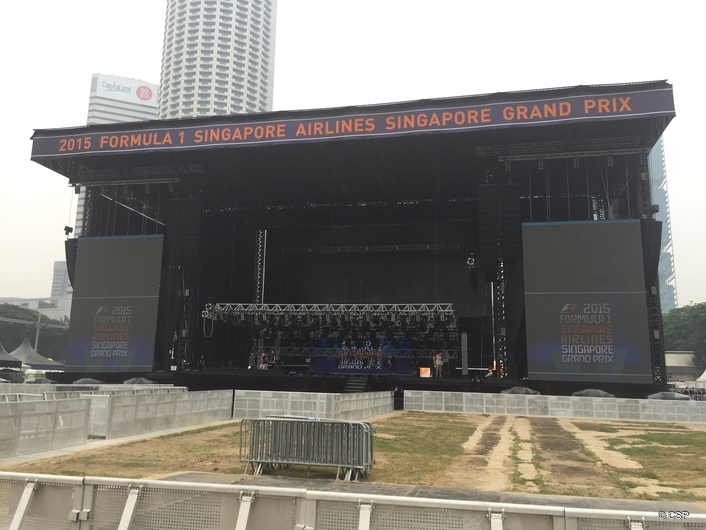 The main system comprised 14 flown L-Acoustics K1 as well as 12 K1-SB and three Kara per side, complemented by eight ground-stacks of four SB28 subs, with a dV-DOSC on each stack for immediate front row coverage

“The decision to deploy the L-Acoustics K1 System for the first time at the main stage for the 2015 FORMULA 1 SINGAPORE AIRLINES SINGAPORE GRAND PRIX was based on the trust that event organizers have in the CSP audio team and our ability to seamlessly switch to the new system,” continues Heng. “With the support from L-Acoustics, our team was able to pull off the event successfully. 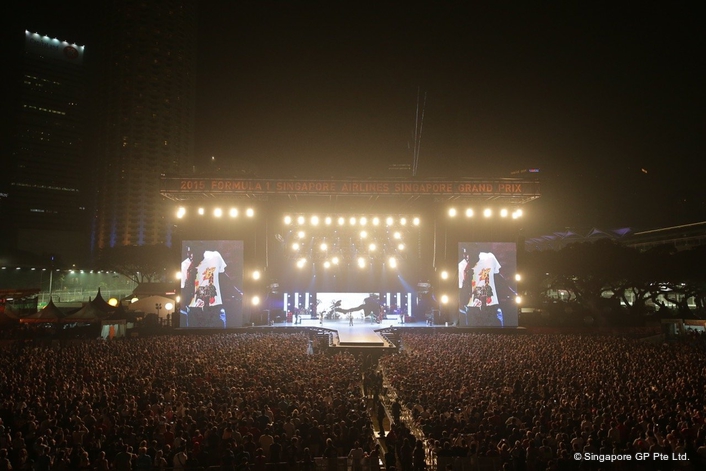 “The system received favourable reviews from touring engineers and concert attendees alike. Touring engineers were comfortable, as they’ve used the K1 system for previous shows in their tours. Concert attendees were blown away by the fidelity and coverage of the system throughout the venue.”
“The integration of the new system into our current inventory was rapid, due to the existing amplification and support platforms currently employed,” concludes Heng. “Our CSP Productions audio team were already familiar with the L-Acoustics workflow and system configuration philosophies and we are confident that the K1 system will allow us to handle the increasing demand for large format events and arena scale concert tours.”

About L-Acoustics
Founded in 1984 near Paris, France, L-Acoustics is a leading manufacturer of turnkey solutions for the professional sound industry. With 250 team members, 20 percent of whom are dedicated to R&D, L-Acoustics is present in over 60 countries either through subsidiaries or via a network of certified distributors or providers.

Recognized throughout the industry for pioneering the modern line array, L-Acoustics offers a total system approach for both the touring and fixed installation markets, and a product line responding to the needs of venues from the most intimate club to the grandest arena. L-Acoustics sound systems can be heard in places like the Hollywood Bowl, the NBA Houston Rockets Toyota Center, or the Philharmonie de Paris. L-Acoustics solutions have been used at five of the world’s ten top-grossing festivals, the London and Sochi Olympics, and on the Justin Timberlake 20/20 Experience World Tour, among others.