Colour Sound Back on for You Me at Six Tour 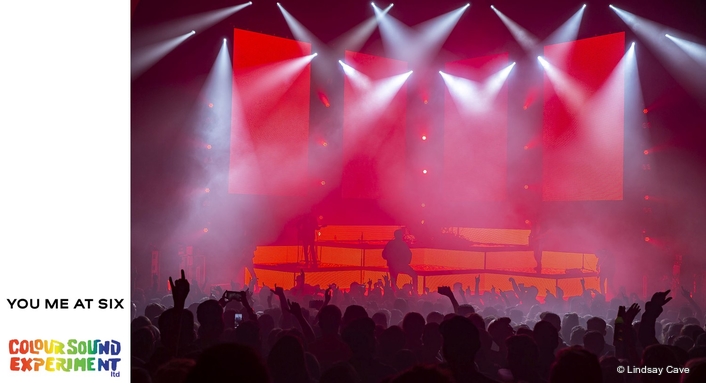 London UK lighting and visuals rental specialist Colour Sound Experiment supplied lighting and LED screens for the recent tour by UK rockers You Me At Six, which promoted their latest album VI. The tour also celebrated 10 years since their first album Take Off Your Colours catapulted them to the top of the charts, launching a subsequently highly productive and successful career with some great music.

H (Haydn Cruickshank) and the team at Colour Sound were delighted to be working with Jamie Thompson from MIRRAD who co-designed set, lighting and video together with Dave Cohen, with Dave directing lighting and visuals on the road. 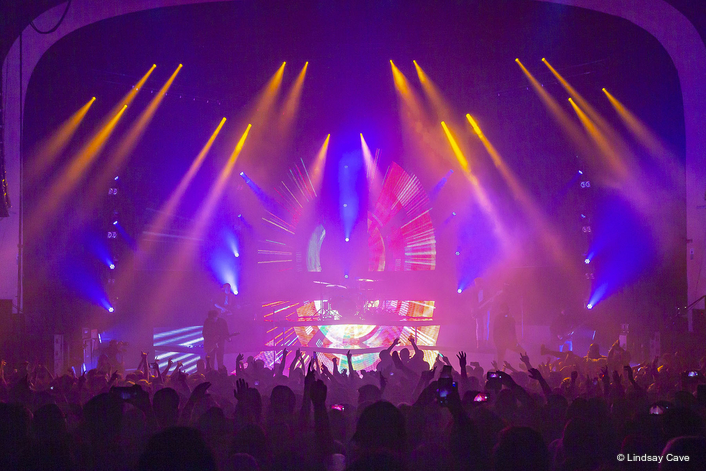 Jamie explains that the design brief was to create “something big, epic, memorable… and cost effective”. Additionally, the band wanted to play two completely different sets – one comprising music from the first album, and the second featuring songs from the latest one and the other four in between. So, the idea was that the show would alternate between these, each with its own totally unique look and style.

Jamie and Dave therefore had to design for 38 tracks, all of which would be played! Of course, imaginative challenges like this are their MO and what they love, and they were joined by MIRRAD’s Francis Clegg, who programmed the console.

MIRRAD and Colour Sound have collaborated on several previous projects, and Jamie and Dave also wanted the continuity of sourcing lighting and video from one company, a decision that enabled some competitive pricing. 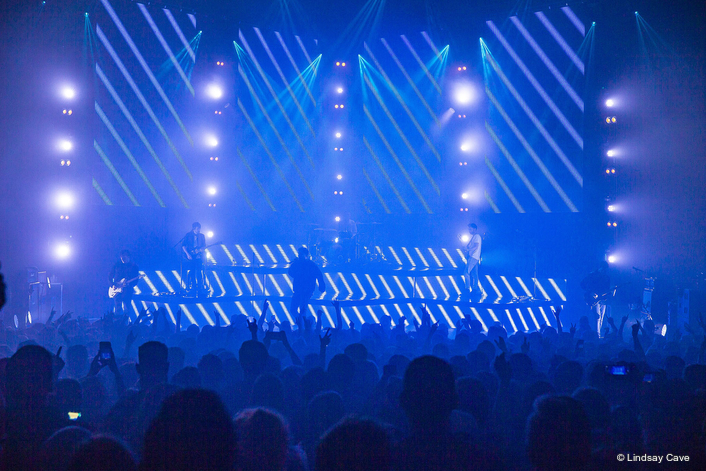 Taking the Roman ‘VI’ from the album artwork was a visual starting point, Jamie and Dave wanted to introduce some V-shapes to the stage architecture and accentuate the perspective and depth of the space.

The proposed multi-layered V-shaped risers fronted with LED video panels set the tone with a look that was both striking and practical to tour and build each day. “They are an energetic band, so we wanted to offer them lots of layers and levels to jump and run around on during the performance” explained Jamie.

Upstage of the set risers were four tall portrait format video screens, hung on angles making up a V shape (with the apex of the V upstage) and in between these were five soft-ladders to give layered lighting positions. 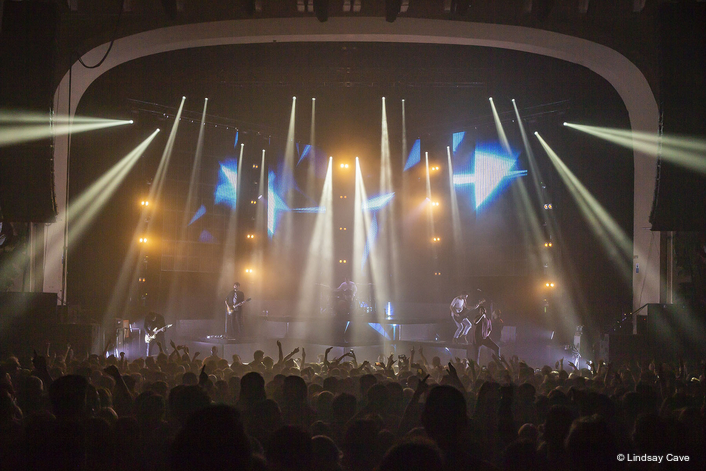 Due to its light weight which made rigging straightforward - and also because they wanted a transparent look - Colour Sound’s BT-20 LED screen was selected for these main screens, while the riser fronts were clad in BT-12.

The Hippotizer Amber media server storing and playing back all the video content was part of the overall control package from MIRRAD including an Avolites console. The video material was commissioned by MIRRAD and produced by Tom and Satoko Wall at Bikini Lab.

The venues on the tour varied in size and shape from the extremely intimate dimensions of Rock City in Nottingham to the cavernous environs of Brixton Academy, so there were three diverse design options for the rig to fit the variety of spaces, all maintaining the integrity and ambience of the design. 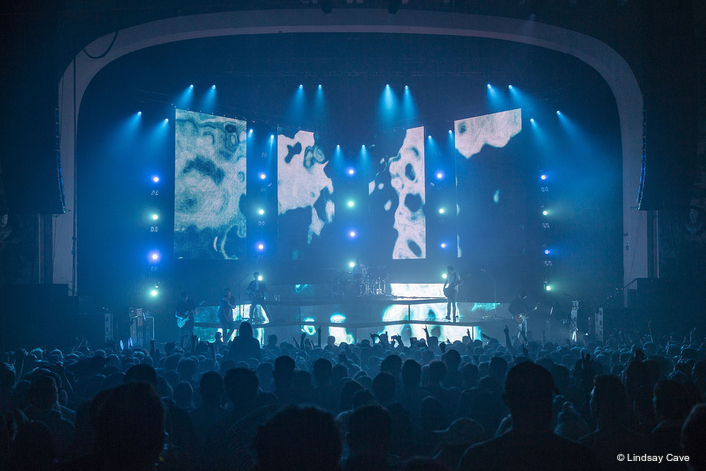 Three trusses facilitated the overhead lighting rig – front, back and mid for the largest configurations of the design – plus two diagonal runs of trussing used to fly the four portrait video screens.

The lighting fixtures included 20 x Robe Pointes – chosen for their multifunctionality and the sheer range of eye-popping options they bring to any lighting scenario. They were joined by ProLights Diamond 7 LED washes, six Robe BMFL Spots, primarily for key lighting and Robe LEDWash 600s for additional and supporting wash duties.

The strobes were SGM P7s which also doubled as LED floods and there a quantity of blinders which completed the lighting picture. 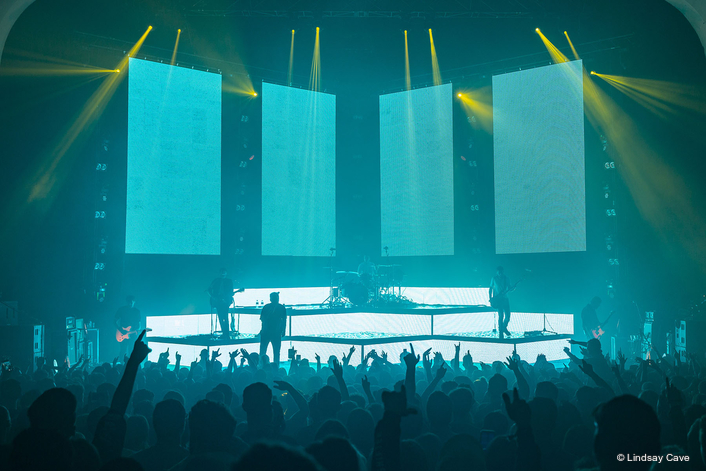 These were deployed in the air and on the deck. The strobes were all on the floor, the Diamond 7s and blinders were on the soft-ladders and the Pointes and BMFLs were in the air.  The LEDWash 600s were on the floor along the sides of stage for low-level cross stage beams, washes and general infill.
The rig was carefully considered and chosen to produce maximum effect and occupy minimal truck-space!

Jamie and Dave worked hard to make all of it go a long way and produce two shows that were dynamically different to suit the two sets. The two resulting shows blended plenty of rock attitude with some more eclectic and interesting pop elements… crafted with that renowned MIRRAD finesse adding some touches of art house.

Much of the dynamics of how it looked and came over stylistically was down to Jamie and Dave’s programming skills as well as their vision as designers.
Jamie also commented that working on it as a co-design team also brought an additional richness and inspiration to the process.
Dave was joined on the road by three great Colour Sound’s technicians - Sam Kenyon, Will Wright and Alex McKoy.

Colour Sound and MIRRAD continued their great working relationship which has contributed to a variety of shows and tours, large and small. “We really like working with H and the team” stated Jamie, “they are extremely friendly, knowledgeable and helpful in all aspects of what we need to achieve”.

H commented: “We always look forward to collaborating on MIRRAD shows, as you know it’s going to be exciting, a bit different, and look excellent! Jamie and Dave needed to make the kit go as far as possible on this one to ensure the band could get their two distinctive but equally good-looking shows, and we were happy to assist in their great looking end results.”

Colour Sound
You Me at Six