Give A Little Something for Above & Beyond 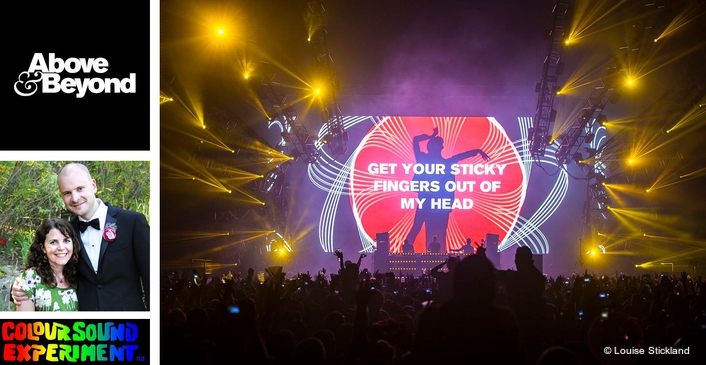 Consistently innovative, exciting and alternative, the trancey electro beats of Above & Beyond filled London’s Wembley Arena for a special one off concert which was also a charity fundraiser  and celebrated the life and work of Jono Grant’s sister Charlotte who died suddenly earlier this year. All proceeds from the show went to Little Something.

Lighting and the video system was designed by Neil Marsh, working closely with all three members of Above & Beyond - Jono, Tony McGuinness and Paavo Siljamăki – with lighting kit and LED screens supplied by Colour Sound Experiment.

Neil started working with the band after lighting their set at Glastonbury’s Dance East a few years back, and he now co-ordinates lighting and visuals worldwide for all shows, primarily working with local productions in large one-off scenarios. 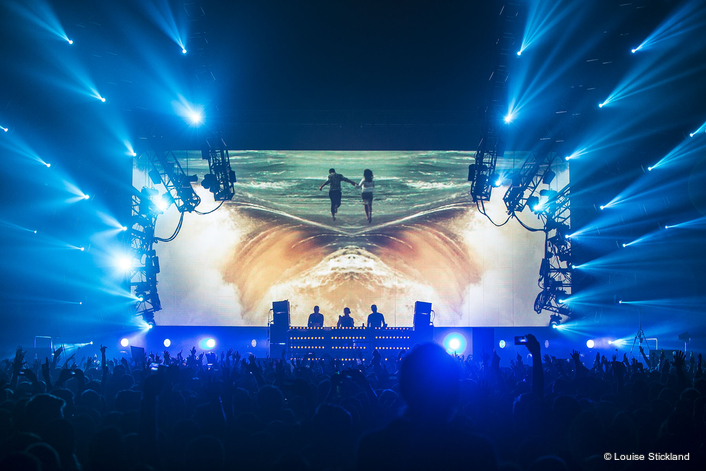 When in the UK, Colour Sound is one of his go-to suppliers and when he approached them about this show, H (Haydn Cruickshank) and the team fully embraced the concept of the fundraiser and ensured that they could produce a full on arena show.

Neil decided on a completely new design for the Wembley show as it was special.

The idea of the 12 truss spines – running upstage / downstage, six hung in a curved arrangement cascading onstage to offstage each side of the DJ booth - created the basic stage architecture. This was originally inspired by a stylised drawing of an angel created by Neil’s wife, artist Leora Honeyman.

Having the spine trusses each side also left the perfect space for a large block of LED which is ideally suited to the style of the visuals. While the LED elements available will vary from gig to gig, the one large surface is preferred rather than a fragmented look and on this occasion it was Colour Sound’s new proprietary BT-7 HD screen, which looked spectacular. 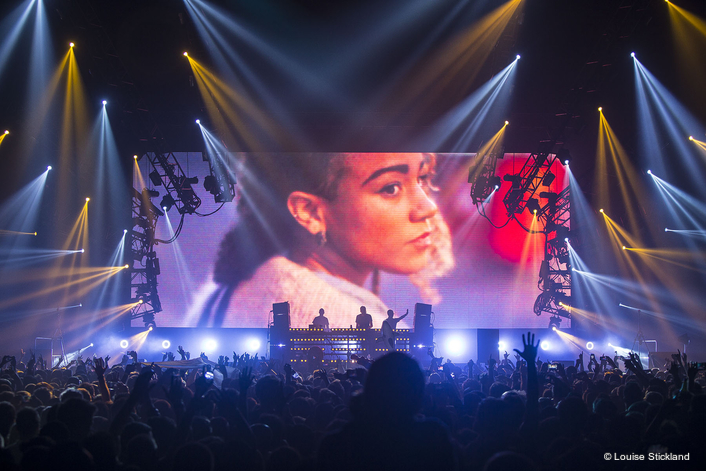 Two trusses were rigged either side at the front of stage, each loaded with six Robe BMFL Spots well placed for scanning over the audience and pulling them into the action.

The 12 x spine trusses – of three different lengths - were populated with a total of 50 x Clay Paky Sharpies, 50 x 2-lite blinders and 26 x strobes. The bottom of each truss was outlined with Colour Sound’s house 1 metre LED strips – utilising 60 units in total.

The front of the DJ booth was clad with 12 active Showtec Sunstrips … to differentiate it from the screen.

On the floor were another 12 x BMFL Spots, 12 Robe LEDWash 600s and 22 x Atomic strobes arranged in pairs.

The impressive screen measured 15 metres wide by 7 high and its 7 mm resolution offered a 1920p pixel-perfect, clean and high-clarity surface for the content which needed no mapping or manipulation. Two 3x3 metre side screens were 400 pixels wide. 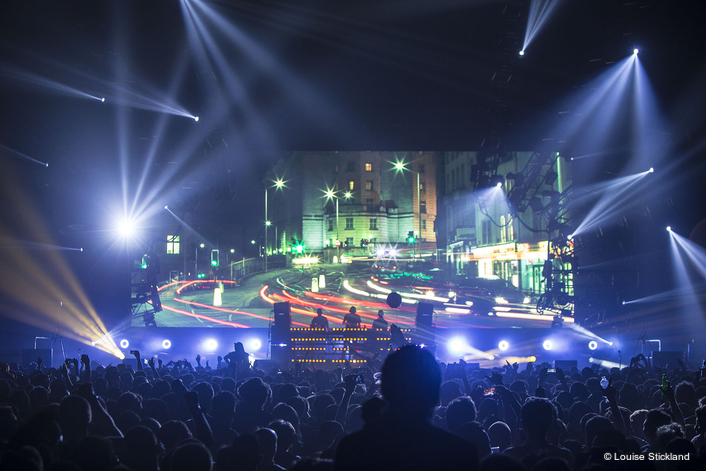 All lighting was run off a ChamSys MQ200 console, Neil’s desk of choice, through which he also triggered the visuals.

Video for Above & Beyond’s larger shows is stored on two Mac Pro servers running a magic mix of Millumin and Mad Mapper software platforms for playback, all controlled via a custom system called VizSys, which was coded by Timo Reunanen and Paavo Siljamăki.

Triggered from an iPad at FOH running a custom version of touchOSC, the midi clock from the mixer is included in the coding on the MacPros to keep the visuals in sync. They can also check the status of the video network from FOH and see that the decks and DJ mixer are connected and working … even chat to the band onstage over iChat if necessary to deal with on-the-fly set changes!

Footage from two web cams and a GoPro onstage can also be introduced to the video mix at various points.

There’s no MC’ing during Above & Beyond shows, they communicate with the audience by typing text onto the screen via a modified laptop, which has proved a hugely successful method of engagement with the audience – and a relief to anyone bored of hearing endless iterations of  “Make some F***ing noise” punctuating many a stonking performance!

Although he knows the set, Neil’s starting point for lighting this large and high profile one-off was often the visuals, to which he would match the colour and catch the mood. 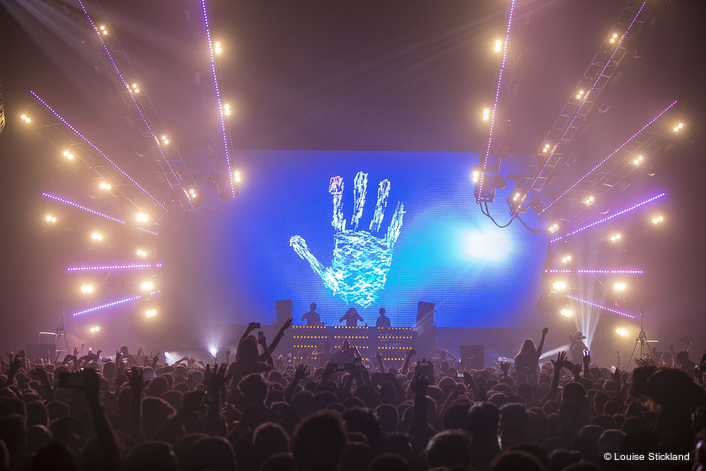 Most of the visuals are produced by Dylan Byrne but all the band have input into them especially Tony McGuiness. Some of the screen material is graphics, but Above & Beyond visuals don’t follow any standard EDM formats and are generally much more cinematic in feel and emotionally based.

All this makes Neil look at the lighting in terms of colour and mood, enhancing the music and visuals … a modus operandi that produces great result transforming even the largest arena environments into intimate clubby spaces for the set.

Dave Kyle – also a Colour Sound regular – is currently working as Neil’s production visuals partner-in-crime. He’s assisting Neil with all the video mapping and cameras and applying his wizardry to pre-patching and pre-visualising lighting for the big international shows using the ChamSys visualiser … among numerous other invaluable duties! 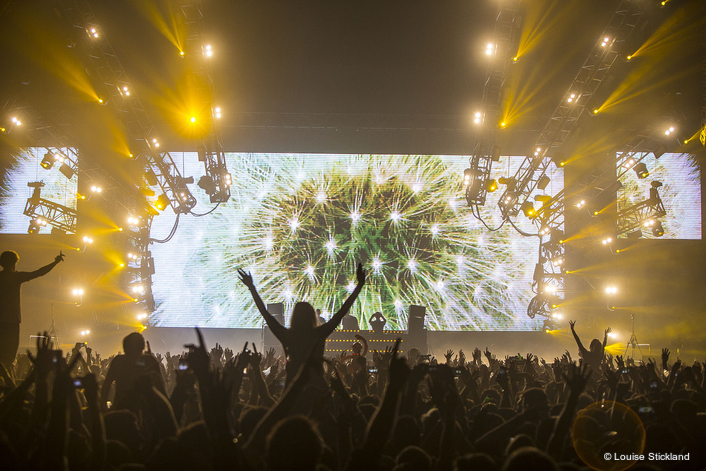 “I’ve had fantastic service from Colour Sound,” he confirms. “H did an excellent deal on the rig which really helped us produce a top show for the occasion and nothing was too much trouble”.

Colour Sound’s Haydn Cruickshank added, “It was a great pleasure to be able to work on this with Neil and Above & Beyond, especially for such a worthwhile cause. We were very proud to have been part of an amazing event”

About Little Something
‘Little Something’ is a charitable fund established by the band and Charlotte’s colleagues to support the work of the Devon Perinatal Mental Health team (with whom Charlotte worked) and to assist more families in the future. Charlotte dedicated her life to maternal mental health issues and supporting mothers and babies through difficult times with compassion and insight. She loved the song Little Something and felt the lyrics captured the essence of her work. Through the organisation her legacy will live on to inspire and uplift.

Above & Beyond
Colour Sound Experiment