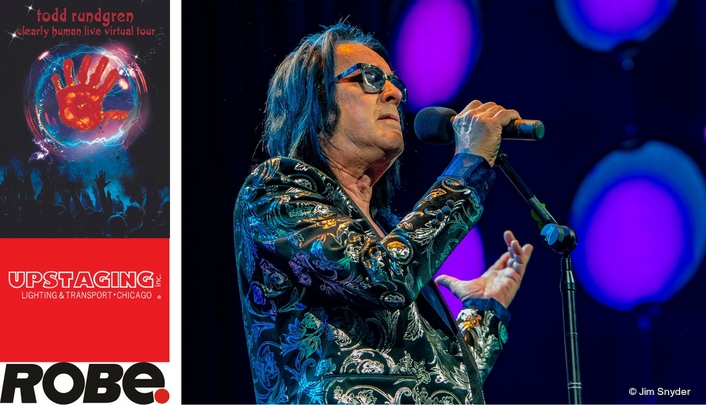 Artists continue to be creative and inventive in presenting themselves during these pandemic times, and legendary musician, singer and songwriter Todd Rundgren’s ground-breaking new virtual ‘tour’ concept took imagination, technology and lateral thinking to another level to bring fans the most exhilarating experience possible! The 25 shows were broadcast live over a five-week period from Radius Chicago, a cool new 3,800 capacity cutting-edge live performance venue in an old Pilsen steel factory. Each day was orientated towards a particular city, complete with special locally related video content, and people living in the relevant area able to access advanced tickets before the box office was opened further.

Lighting designer Hans Shoop utilized Robe BMFL Spots, Spikies and a RoboSpot system controlling three BMFL Follow Spots to great effect on the rig – among other lights – fulfilling a brief to create as much normalcy as possible for a live band show! They specifically didn’t want the production looking like a video shoot nor a ‘band in a void’ recording scenario, a mission for which he worked closely with Alex Skowron.

Alex – also an LD in his own right – had been the production designer on Rundgren’s 2004 ‘Liars’ tour. When he heard about this virtual tour project, he reached out to the production team headed by production / tour manager and monitor engineer Paul Froula and asked if he could assist.

He explained how the mission was to make the space appear nondescript and neutral so the audience could think they were actually touring. “The last thing we wanted was to have the same architectural features coming up show after show, so we blacked out any features that would give away the fact we were in the same space for 5 weeks and turned the room into a black box.”

Alex became involved on the lighting and visuals production, sourcing kit and crew and crunching logistics which included keeping the equipment supplies as local as possible. He was also “indispensable” in materializing the design explained Hans, adding that Alex’s vast fund of experience and attention to detail freed him up to concentrate on finessing the lighting design.

Having worked with the artist for the last 12 years, he knows what he likes and in this case was given a relatively open brief together with a few key constraints, and in response submitted a variety of design ideas which were finessed by Todd Rundgren himself.

Hans’ fundamental task was to ensure the artist was well lit at all times and from all angles – so the RoboSpot system helped enormously providing a key, a fill and a backlighting BMFL Follow Spot tracking him constantly. These three luminaires were all controlled by one operator with the RoboSpot Base Station located near the FOH area.

RoboSpot duty was split between five stagehands working in daily shifts throughout the week for the two-hour performance, and they were all kept animated throughout the set tracking Rundgren’s many moves! 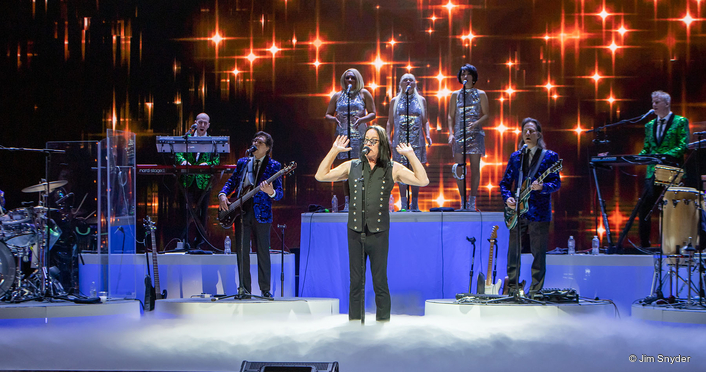 As well as the tight key lighting, Hans also kept the background elements looking interesting and relevant from all angles.

The full lighting rig was supplied by Upstaging, who rigged 12 trusses above the Radius’ stage – seven for lighting, four for scenics including two kabuki drops, and one upstage supporting the LED wall.

The 24 x BMFL Spots were rigged all over the lighting trusses and on the deck used for the key light and specials across the 12-piece band, as well as for lighting scenic elements, “keeping the quality of the light and the gobo set consistent”.

The 32 x Spikies were lined up along the vertical bars of two pods flown each side of stage and were an essential visual piece filling the wing voids on camera. They became more apparent as the show arc unfolded, explained Hans, initially backlighting the kabuki cloths during the early stages of the show, then after these dropped providing punchy, piercing beams firing through the haze towards the end of the set.

While he had originally spec’d LEDBeam 150s, the little Spikies were in stock at Upstaging and came into their own!

“The zoom, prism and Flower effects and the 360 continuous pan-and-tilt gave me multiple tools for crafting a diverse array of looks,” stated Hans. 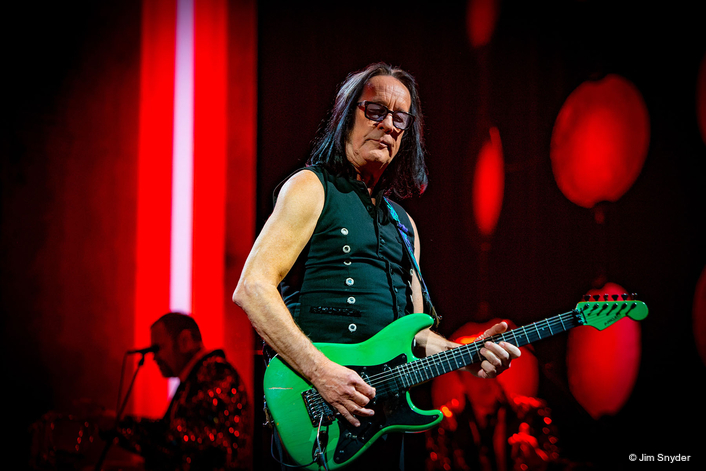 It was his desire for elegant and efficient follow spotting that initially led him towards the RoboSpot system, and from that he decided that adding BMFL Spots would add continuity. He likes many things about these luminaires including the color mixing and the excellent range of color corrected whites.

Hans often specs Robe for his projects and sees them on numerous festivals, house rigs and rental company stock lists. “I’m always happy when I see Robe on the kit list!” he confirms.

While lighting this show was just like lighting a live performance in many ways, it also required an extra layer of thought and intelligence and considering things like keeping contrast levels appropriate for the cameras.

Alex highlights the cruciality of the ‘human factor’ in this project. “Gear is gear but it takes the right staff to keep it running smoothly and properly. I tried to use all my regular vendors as I knew they would be hugely enthusiastic and help make it a successful show.”

The thousands watching remotely on a device somewhere – also visible to the band on video tiles at the front of stage – and the 30 in-person (masked and tested) audience allowed in the venue each night were treated to a sensational set featuring music from the seminal 1989 Clearly Human album plus many others from Rundgren’s prolific back catalogue.

Like everyone, Hans absolutely relished being back at work after the longest break in his professional career as well as seeing a living breathing show every night “with great music played by super talented people” hand-picked by Rundgren. 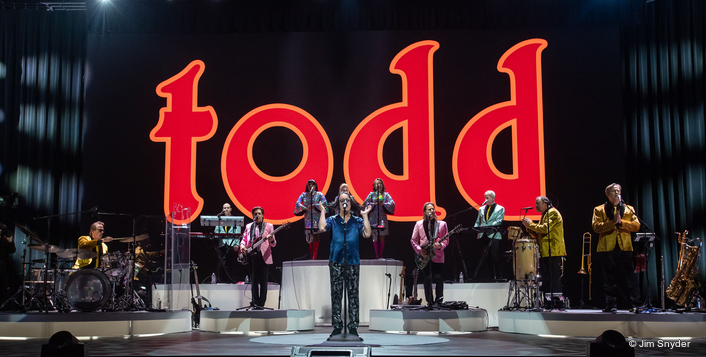 He loved the natural synergies that evolved between everyone as the production process unfolded and the shared dedication of all involved in producing something special, uplifting and real in what has been a strange and strained time for live entertainment.

The broadcast camera director was John Deeney and video production – screens and cameras – were supplied by Nighthawk Video. Hans was also involved in creating some of the custom video content along with Todd Rundgren and Danny Connor.

While not the same as a real tour, the shows were a huge success, and also included some cool optional extras for enthusiasts like virtual meet-and-greets, VIP packages with access to a virtual greenroom and the chance to toggle between cameras.