A Buzz Around the Clay Paky B-EYE 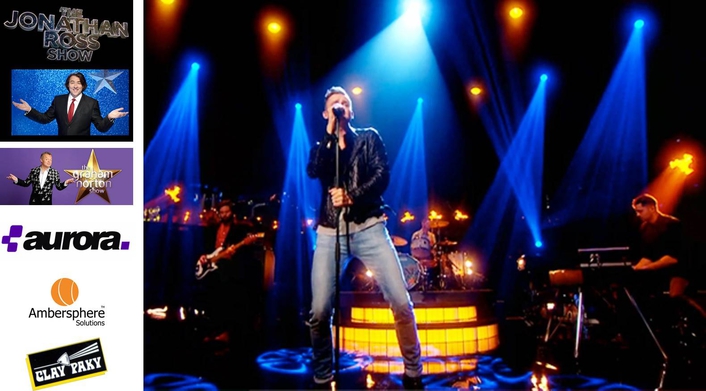 .
2014 looks set to be the year of the B-EYE, the latest innovation from the Clay Paky stable of moving light fixtures. The design and effect possibilities of the K20 and its smaller sibling, the K10 are best seen when the lights are in action; even a thorough study of the written documentation doesn’t really seem to quite do them justice.

Exclusive UK and ROI distributors, Ambersphere Solutions were on hand to provide support and service at one of the B-EYE’s latest outings – the recordings of the Jonathan Ross Show for production company, Hot Sauce and at the Graham Norton Show for So Television. All the fixtures for these recordings were supplied by Aurora Lighting Hire who have a well-established reputation in television lighting and know exactly what works best on camera.

Lee House from Ambersphere’s technical sales was enthused by the B-EYE’s reception.  “I think it is the astounding versatility of the B-EYE that first catches the attention of production teams and lighting designers.  Seeing the K20 in action with on the Graham Norton Show and the Jonathan Ross Show gave all those involved the opportunity to realise just how ground-breaking the B-EYE is”.

“This is an LED wash light with a zoom from seventy down to four degrees but that is only the start of the B-EYE’s box of tricks. There has already been a great deal written about all the fabulous effects of the B-EYE,” continues House, “but it is when you see it working ‘in situ’ that one really appreciates how revolutionary it is.  It can be a wash light, a beam light or a key light and yet become an effects fixture of almost limitless potential that works just as well to camera as it does live.  Everyone who watched the recording were fired up with the creative possibilities of the B-EYE as well as the financial and logistical advantages of having such an ‘all singing, all dancing’ luminaire on a lighting rig.”

Ambersphere Solutions provide an exclusive service of sales, distribution and technical support for Clay Paky products but as House concludes, “The rather clever team at Clay Paky have, yet again, produced a moving light that makes designers choices that much easier.”