Fedez's tour follows the success of his album Pop-Hoolista, which was a permanent fixture in the top 20 for more than twenty-four weeks, earning him a double platinum award. Fedez is an awkward artist. He is intelligent and freely expresses biting concepts, which he combines with provocative images. On his tour of arenas and clubs, he proved he is able to hold the stage without concern, even at challenging venues, like the Mediolanum Forum just outside Milan and the PalaLottomatica in Rome.

Lighting designer Francesco De Cave explained the show to us: "Fedez impressed me with his way with words. He knows just what he wants. I conceived the tour and the ideas for the set design with Mario Zappa, from F&P Group, in response to Fedez's own ideas. Fedez wrote the show himself. In my role as lighting designer, I looked for several ways to fill the interludes, some with lights and some with visual effects and sounds. These interludes are necessary transitions between one piece and the next to allow costume changes and glue together the different parts of the show Fedez asked for. 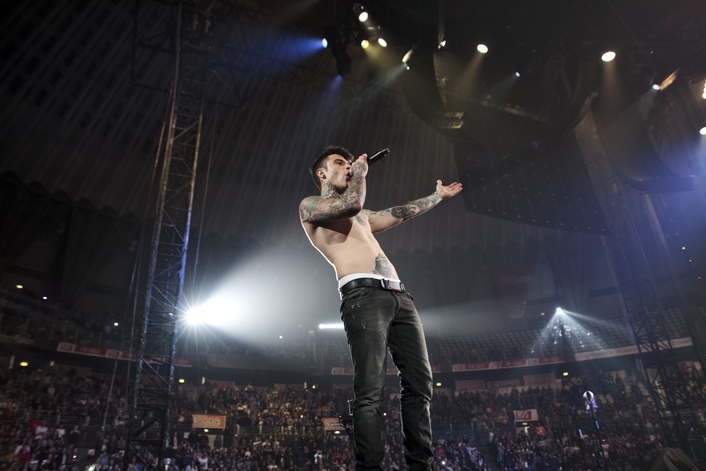 I originally considered a rig on two planes to narrow down the Mediolanum Forum slightly by getting rid of the curves. When Fedez's popularity literally exploded, we began to think of a 360° circular stage, and designed a set with a shape reminiscent of the tattoo on the artist's neck.

The design became more detailed and complex thanks to the ideas and efforts of set designer Igor Ronchese from Tekset, who - in addition to dealing with the shape of the stage - stepped in to create the scenery and props Fedez asked for. 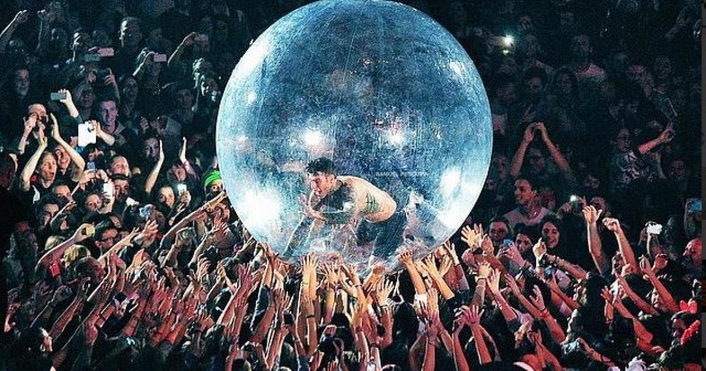 It was a difficult show to follow: the audience did not see everything that happened on stage directly. Several cameras and monitors were needed. These were entrusted to the technical team, which included assistant lighting designer Emanuele Vangelatos and the video clip manager Carlo Barbero. The scenes were shot with four manned cameras and four remote controlled cameras resting directly on the stage at fixed points chosen according to the show's choreography, directed by Maurizio Maggi.

To make sure everyone could see all Fedez's movements and make the show really enthralling, I put together the visual effects using the live program.

I ran the show using two HOG4 consoles, with DP8000 processors, and two Catalyst media servers. Sometimes I mixed the concert audio sessions with them, and sometimes I used them for the audio-video clips through which Fedez transmits his ideas and the clips recorded by Francesco De Gregori, the actor Francesco Pannofino and the drawings by cartoonist Dr. Pira.” 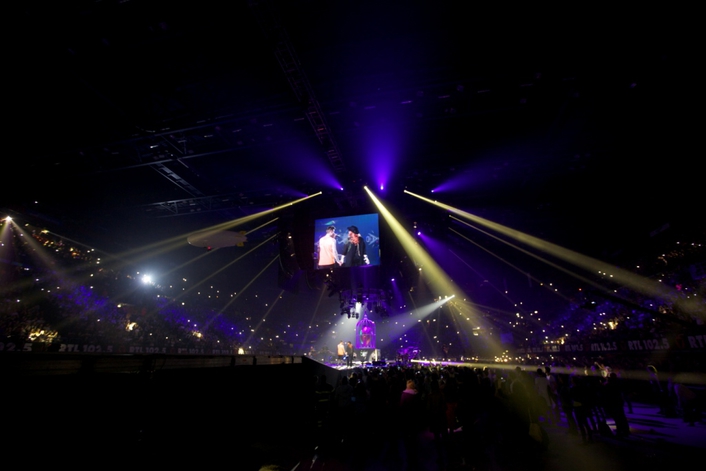 “Fedez wanted a concept show and he wanted the typical atmosphere of a song theatre. Large props were used to bring out and illustrate the meaning of his pieces. Igor and Fedez had the idea of lowering polystyrene objects onto the stage. During the song Cardinal Chic, there was a ten-foot-high Rolex, with a cross instead of hands. In another piece, a large heart appeared made of fifty euro banknotes which fell from the sky like rain, and large faces of various VIPs came down when he talked about the dynasties of protégés.”

"In this case, the Sharpy Wash units installed on the ground provided great range with their unique zooms. They are perfect for a circular stage since they do not mess it up by creating shadows or projecting annoying shadows from the bottom lighting. 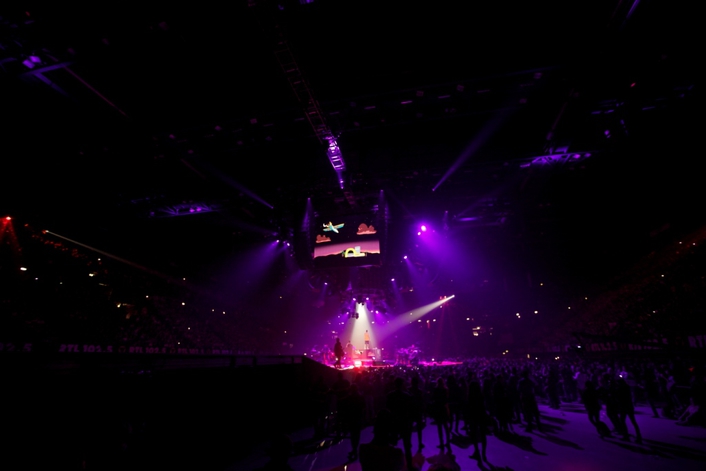 The most exciting moments in my work are those where I have greatest creative freedom, the ones which allow me to follow and express what is happening on stage fully. In "Magnifico", we produced a beautiful scene with falling strips of coloured paper and confetti which created effects by reflecting light.

In Amore Eternit, the song Fedez sang with Noemi during the concert in Milan, the lyrics draw a parallel between love and the toxic material. Ronchese built a thirteen-foot-high birdcage containing a heart with fluorescent parts illuminated with blue and red light to accentuate the feeling of danger it transmits.
It was exciting and I picked up on the theme of the cage by surrounding the stage with narrow beams created by 70 Sharpys.” 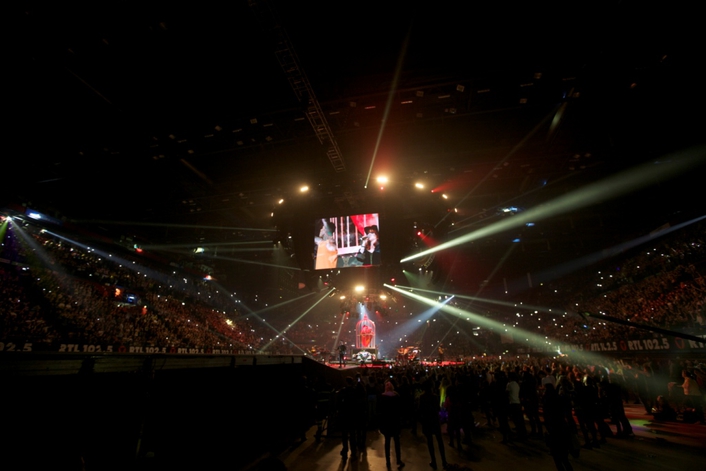 Rigging was really fast. The bottom of the structure rests on a thirteen-foot-diameter circle connected with four diagonal BAT trusses to another circle of over sixty feet in diameter. BAT trusses are a new concept in trusses that allow you to leave your lights wired up during transport.
The circular stage forced me to put the lights very high up, at much too much of an angle and with problems getting between the LED clusters and screens. I used four vertical 1 × 1 foot trusses to set up some front lighting and create more perspective.

I installed 46 Clay Paky Alpha Profile 1500s and 35 Sharpy Wash units on these four vertical trusses.
Fedez extended his tour of the most important Italian clubs until April, while awaiting the summer season, which will include outdoor concerts, such as the one at the Capannelle Racecourse in Rome.

The equipment was supplied by Agorà.