Performing Europe-wide to the head banging delight of more than 60,000 fans per night, the raw style of Woodroffe's design reflects AC/DC's in your face, visceral, straight up rock-and-roll approach, delivering big, bright chunky beams, dirty acid colours and a beat perfect manipulation of intensity throughout.

"AC/DC has always demanded bold, bright, spectacular - yet uncomplicated - lighting and I think this time we gave it to them in spades!" explains Woodroffe. "We were looking for powerful, bright lights that would work particularly well with no colour. We also wanted some more delicate effects, some tight beams and some hard edge source points. We chose a variety of fixtures including the new Vari-Lite VL4000 BeamWash and the VL3500 washes, which in combination gave us most of what we needed, in various permutations."

Woodroffe worked in close collaboration with long term AC/DC lighting director Cosmo Wilson, who is responsible for taking the show on the road. Indeed the the pair took a leap of faith when they specified the then unproven VL4000 BeamWash: "I'm fast approaching my 700th AC/DC show," laughs Cosmo, "and all of them apart from this tour have used Parcans as a mainstay in the rig. However I'm a big fan of Vari-Lite and although at the time the VL4000 BeamWash was unproven, we were assured Vari-Lite would deliver."

Suffice to say Vari-Lite did deliver and according to both Woodroffe and Cosmo the VL4000 BeamWash luminaires are working brilliantly. "The VL4000 BeamWash lens system is unbelievably good," continues Cosmo. "We use it as a wash but then we tighten it up and it's a great profile. I'm not a big gobo person - let's face it AC/DC isn't exactly a gobo band - however the rare times we do use them they work really well. 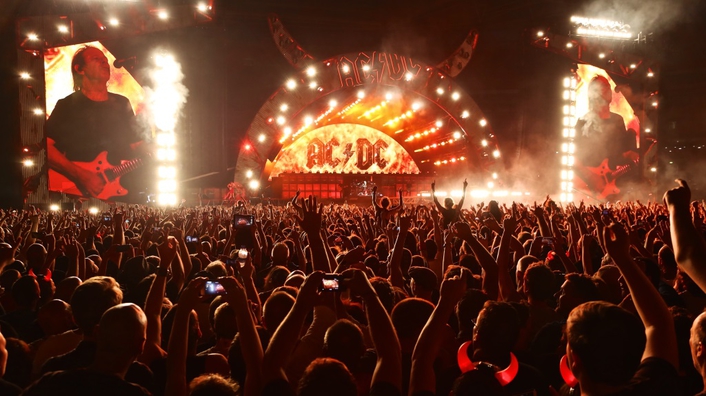 "Yes, they're big lights, but they move fast and that enables me to change the look on the stage in an instant. Colour is also important as we wanted to reproduce all those grungy and acid colours with a raw, almost analogue feel. AC/DC lighting is all about using intensity to accompany the music - we want the audience to feel the heat, feel that sense of attack and decay alongside the attack and decay of the guitar."

Lighting has been supplied by US company Upstaging and UK based Neg Earth. The current tour runs until December 15th when the band finish their Australasian leg at Western Springs Stadium in Auckland. However there are rumours that the tour will extend into 2016.