Those About to Rock … Salute Robe BMFLs on AC/DC 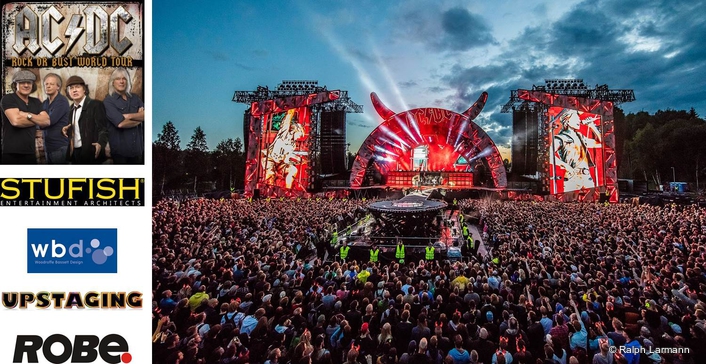 Arguably one of the greatest rock bands of all time – with their instantly recognisable hard driving guitar power chords, screeching acerbic lyrics about life on the edge and renowned for some of the most awesome hi-energy live performances in the history of the genre … rock gods AC/DC are once again taking the world by storm with their Rock or Bust stadium tour.

Another amazing raw, industrial production design by Ray Winkler of Stufish is complimented by an equally inspired and dramatic rock lightshow created by Patrick Woodroffe of Woodroffe Bassett Design (WBD) … with a little help from 39 x Robe BMFLs. 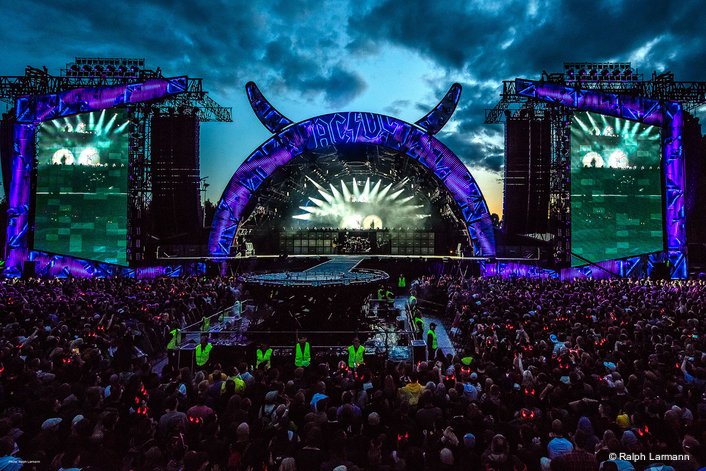 The BMFL Spots are in three key locations on the stage.

The first batch of fixtures are rigged on an upstage arch of trussing – the arch and ten trussing ‘fingers’ are an integral set element -  where they are equally spaced apart and utilised for massive beams and powerful breakup / gobo looks.

They were chosen for their brightness and reliability.

The next position is far upstage on the floor behind the ‘chicken run’ which is an up-and-over riser on which the band whizz about. These BMFLs are the primary fixtures in the reveal of the famous AC/DC cannons that emerge ominously at the start of “For Those about to Rock (We Salute You)”.

The same fixtures are also used to up-light the huge inflatable Rosie character which bursts into life and takes over the stage for the AC/DC anthem “Whole Lotta Rosie” … Rosie has been a feature of the band’s live performances since 1990 … and the song intro also spawned the famous “AN-gus” chant from fans, that since 1978 has become absolute tradition at their raucous live shows! 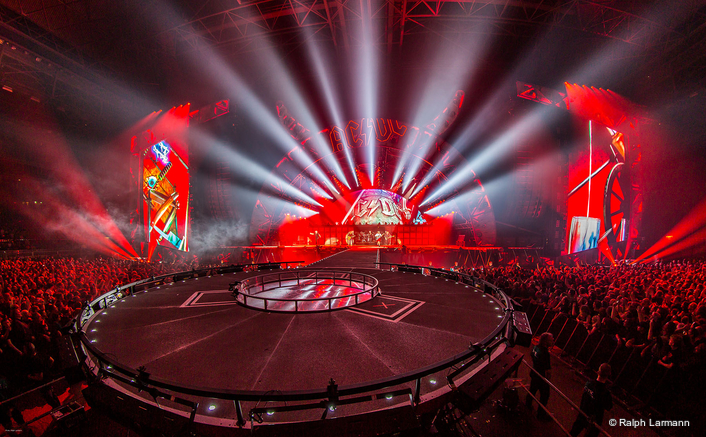 The next BMFL position is above the left and right delay side screens. Six units a side blast out across the audience, reaching up into the air for those mega looks that shoot the energy and the excitement coming off stage right into the atmosphere and to the back of the venue.

They are also perfectly positioned to highlight Angus as he rises up above the crowds on a big circular satellite dish hydraulic lift at the end of the thrust … complete with full-on guitar mayhem!

Terry Cook, Patrick’s lighting Associate Designer for the project explained that he and Patrick chose BMFLs because they wanted ‘impact fixtures’ with “Enough fire power” to stand up against the rest of the rig and the FOH 4000w follow spots … but a luminaire that was also lightweight and user-friendly. 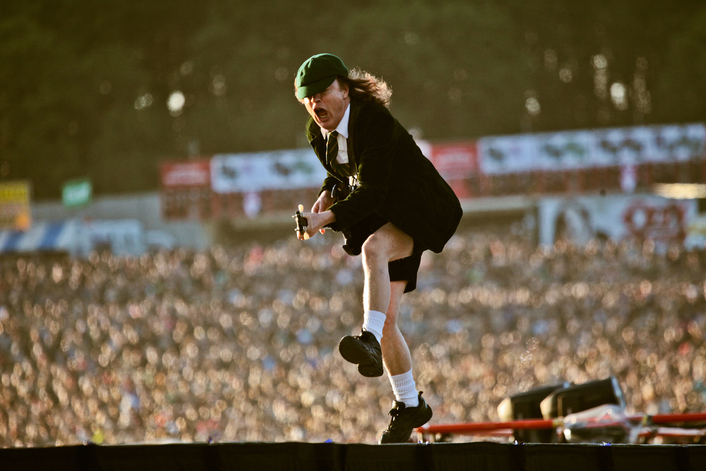 WBD has used BMFLs on a few other shows this year including Rock in Rio, Las Vegas.

The lighting vendor worldwide is Chicago-based Upstaging, who invested in more BMFL Spots specifically for the tour, and delivered by Robe Lighting Inc.

Upstaging’s account handler for the tour is John Huddleston. Lighting was programmed by Dave Hill and Pryderi Baskerville and lighting director / operator on the road is Charlie ‘Cosmo’ Wilson.

‘Rock or Bust’ kicked off in Europe in April following 10 days of full technical production rehearsals at the GelreDome in Arnhem, the Netherlands, and the tour will rock to its hell-and-hair raising conclusion in Australia and New Zealand in December.