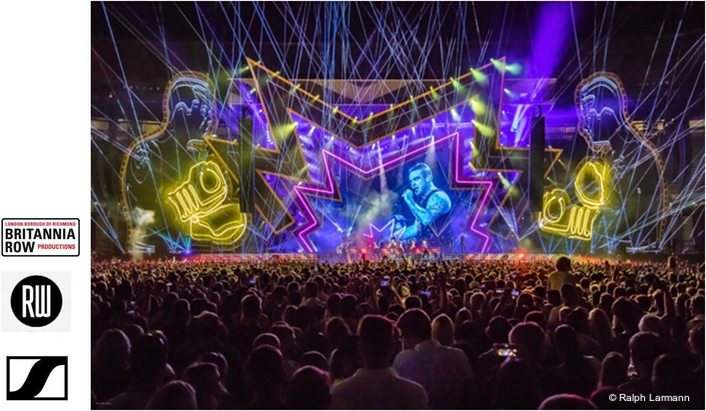 Britannia Row Productions was one of the first companies globally to make an investment in Sennheiser’s new Digital 6000 series, instantly deploying it on Robbie Williams’ The Heavy Entertainment Show tour, which started in Europe last summer and continues with dates in New Zealand and Australia in February and March this year. Robbie played to over 1.1 million fans during the first leg, which took in stadiums, fields and arenas around Europe, and Digital 6000 performed flawlessly throughout.

Robbie’s long-term front-of-house engineer Simon Hodge had used a Sennheiser SKM 5200 wireless microphone for him since 2013 and was very happy with his choice. However, the continuing reduction in RF spectrum prompted a look at Sennheiser’s new Digital 6000 system, which offers the same audio quality as the company’s flagship Digital 9000 series microphones in a two-channel receiver. With its intermodulation-free operation, and proprietary audio codec, which benefits from Sennheiser’s error correction and error concealment that reconstructs the audio signal in less than ideal RF environments, it became a very attractive alternative.

“It seemed a very good idea to look at Sennheiser’s digital option as it helps with reducing spectrum usage which, with a show that has so much RF, really helps us,” says Brit Row’s Josh Lloyd. “And once we auditioned them, the sonic benefits were very clear; the vocal sounds a lot more open and natural and the bleed from other sources down the mics is far cleaner and less problematic for us.”

“The process of arranging the initial demo was quite challenging, as the 6000 series was still in the final stages of production and not yet released,” explains Sennheiser Artist Relations Manager Jack Drury. “But we were really keen for Brit Row to try the system with Robbie, as we believed it would be a great fit for the tour.”

A coordinated effort between Sennheiser’s Kevin Gwyther-Brown and Jack Drury, alongside Chris Lamb from Brit Row meant Sennheiser was able to provide a demo solution to Robbie’s team, just in time for the tour.

“We use it in conjunction with a custom 9235-J capsule that Sennheiser kindly custom-made for us for this tour,” said Josh.

“The 9235-J capsule design was based on the 5235-J, originally intended for the Japanese market, and features a slight notch in the low-mid response of the capsule,” added Jack. “The 9000 Series version was custom-built by Heinz Epping at Sennheiser’s small scale production facility in Germany especially for the Robbie tour.”

“Sennheiser’s support with the whole process has been very good,” concludes Josh. “We’re delighted with how our Digital 6000 system has performed so far and looking forward to the Australasian dates this year.”

About Sennheiser
Sennheiser is shaping the future of audio – a vision built on more than 70 years of innovation culture, which is deeply rooted within the family-owned company. Founded in 1945, Sennheiser is one of the world’s leading manufacturers of headphones, microphones and wireless transmission systems. With 20 sales subsidiaries and long-established trading partners, the company is active in more than 50 countries and operates its own production facilities in Germany, Ireland and the USA. Sennheiser has around 2,800 employees around the world that share a passion for audio excellence. Since 2013, Sennheiser has been managed by Daniel Sennheiser and Dr. Andreas Sennheiser, the third generation of the family to run the company. In 2016, the Sennheiser Group had sales totaling €658.4 million.