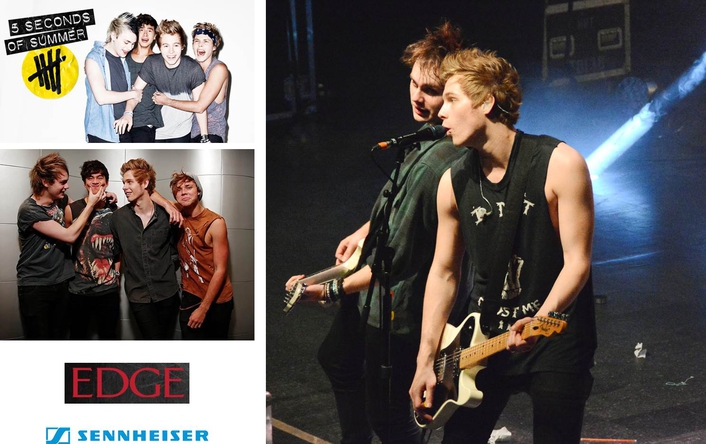 .
Young Australian pop punk band, 5 Seconds of Summer (5SOS) have barely even “arrived” and yet they are already sampling the dizzy heights of international stardom. Their first single, “She Looks So Perfect”, was an instant number-one hit in the iTunes UK charts (and those of 46 other countries) on pre-orders alone before anyone had heard a note. Their self-titled debut album, which only came out at the end of June, has already reached number one in eight different countries worldwide including the USA, and number two pretty much everywhere else. The band is currently supporting One Direction on their worldwide “Where We Are” stadium tour and has just announced a monster headline USA, UK and European arena tour for 2015. The band is using a comprehensive range of Sennheiser wireless and hardwired microphone and wireless monitor systems specified by FoH engineer John Delf and Ben Booker who handles monitors.

“5SOS has grown faster than any band I can remember and they appear to be well known in pretty much every major territory in the world, especially by teenage girls!” remarked John Delf, a highly experienced UK sound engineer (Lily Allen, The Script, The Feeling and many more) and owner of The Edge recording studio in Cheshire. Delf, who has been with the band since the beginning, recruited Ben Booker for monitor duties once the original One Direction arena shows had finished in August 2013 and 5SOS started playing their own headline shows. Booker is himself a highly respected engineer, both at monitors and FoH (Scissor Sisters, PJ Harvey, Spiritualized), although his task with 5SOS is mixing the in-ear systems for the band. Both engineers have long-standing relationships with Sennheiser.

“Our biggest audio challenge is getting the mix heard above the screaming teenage fans,” remarked Booker, “so our mic choices are made for maximum rejection with great quality. For the three stage front vocals we use Sennheiser e 945s. They have a super-tight pick-up which helps reject the cymbals and screaming girls. We use e 904s on toms and snare bottom and another one on the drum vocal as it’s small and has a very tight pick-up pattern which, again, helps reject the cymbals. We’ve got an e 901 and 902 in the kick drum, which I find to be a great combination of sounds, and an MD 441 on the snare top. This is an extravagant choice, but it sounds great – full and deep with a tight pattern to reject hi-hat noise. We’ve got Neumann KM 184s on the hi-hats and overheads and e 906s on the guitars which are set with the top-end boost on. Finally we’ve got a couple of MK 4s that we are using as ambient mics, but these sound so good that they may be moving up to guitar duty soon!”

For wireless monitoring purposes, Booker selected Sennheiser’s evolution wireless 300 G3 IEM system, of which he has no less than eight systems on this tour; four for the band, two for the techs, a spare on a matrix and one for himself for PFL (pre-fader listening) / cueing. “The G3 system is tried and tested and just works,” said Booker. “It always sounds great. Everything is fully networked, so any changes that need to be made are done via laptop.” 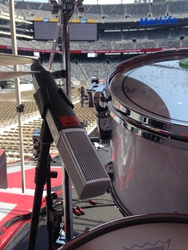 “We have three G3 wireless guitar systems for bass and guitars,” he continued. “This gives the band the confidence and freedom to run up and down the stage and long thrust as much as they like. Each member has two packs so we use the RF mute to quickly change guitars when needed.”

John Delf is equally pleased with the performance of the microphone systems: “We both came up with this combination and find that all mic choices work particularly well for both FoH and Mons applications. I especially love the 441 on the snare and the Neumann 184s on hi-hat and overheads. They just sound so clear and crisp making the cymbals sing through without being harsh. And the 904s on the toms don’t need any EQ yet still manage to sound fat and warm. You can hear both the crack of the skin and the tone of the drum in perfect balance.

”Like Booker, Delf also appreciates the rejection qualities of the e 945s on vocals: “The rejection is excellent, yet they still give you a crisp vocal that cuts through the mix so that you can hear every word,” he confirmed. “That is so important when mixing a punk pop band like 5SOS. The mic combination that we have chosen works very well in all applications from the theatre shows through arenas to the stadiums that we are currently touring in. We have an audience of screaming girls at levels of 110 to 115dB so we need to make sure we have microphones that can cut through and be cranked up high enough to be heard over the screams yet have enough rejection so that they don’t feedback or amplify the screaming any more than is necessary. The 945s do a sterling job in all departments.”

Delf reserved his final word for his appreciation of the relationship with Sennheiser. “The company has shown great support for me and Ben over a number of years, and that high quality of worldwide back-up has been continued with 5 Seconds of Summer. It’s both gratifying and reassuring for the band and technical teams alike. A global band working side by side with a global brand is the perfect combination!”