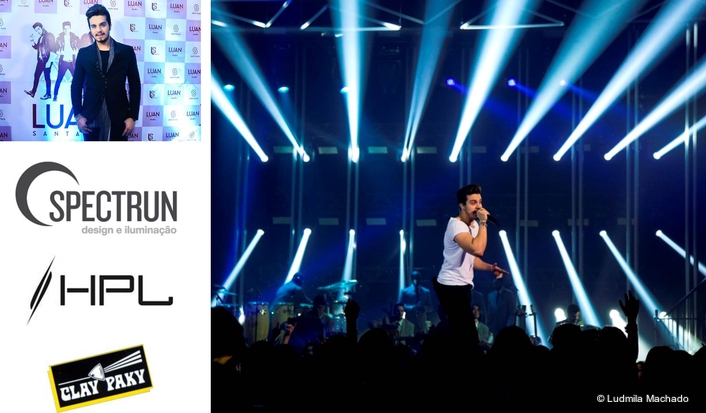 Brazil’s biggest pop star Luan Santana has filmed his latest DVD ‘Luan Santana – Acoustic’ at a sold out show, with the production and lighting designed by Ludmila Machado and Marcos Olivio of Spectrun Design. Together, the creative duo employed an array of Clay Paky fixtures to deliver crucial looks for the event, with the video becoming the second most watched in YouTube history. HPL Light Company is the Clay Paky official distributor for Brazil.

The overall show design had three contrasting segments, conceptualised by Olivio and his two developers Paulo Lebrão and Daniel Dalfovo, and was based on the idea of ‘movement’.

Luan Santana has long been a client of Spectrun Design, with the team designing the shows for his past three films. “Despite being very young, Luan Santana takes immense pride in his work and always wants his shows and DVDs to be of the utmost quality, with the best crew and latest equipment,” says Machado. 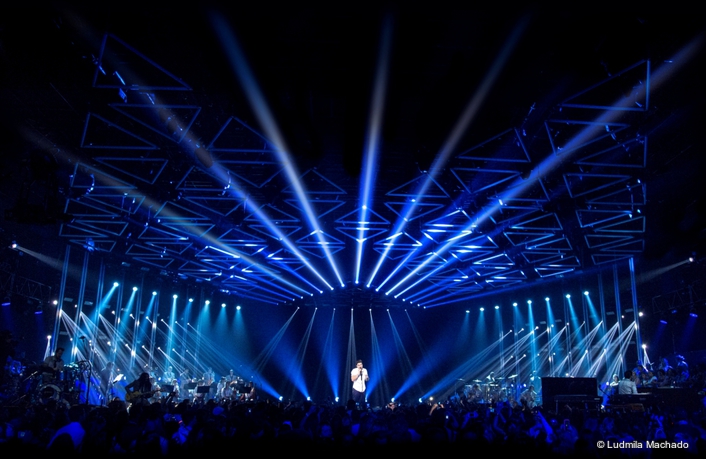 “This time around, as the DVD was ‘unplugged’, Luan cited nostalgia and intimacy as the important themes in his creative brief. Our studio design therefore evoked the façade of a 1950s cinema, with the Sharpy Wash 330s flooding it with beautiful colour in the first part of the show,” continues Machado.

The second part of the show saw the ‘cinema’ deconstruct. Triangular OLEDs that were embedded in the façade began to twist and float alone in the air, with Machado and Olivio employing the two large side walls of Sharpy Beam to ‘dance’ with them.

“At this point, we produced two crucial looks with the Clay Paky fixtures,” says Machado. “We used the powerful, pure beams of the Sharpys to cut across the entire studio and four Sharpy Wash 330s to single out four OLED triangles with colour, creating a delicately beautiful scene.”

In the third part of the show, the designers used the bright beams of the Alpha Spot 1500 fixtures to interact with the OLED triangles, with both elements programmed in sync. 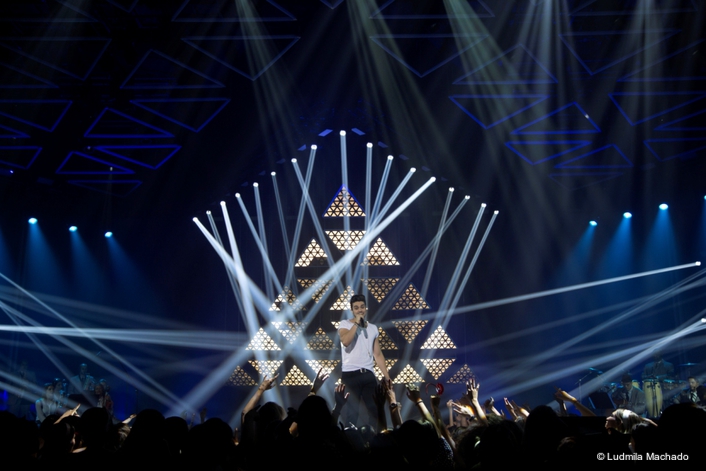 “The Alpha Spot HPE 1500s perfectly amplified the effect of each triangle and brought the audience in by bouncing from the ceiling to the tips of their fingers as they waved their hands. Each song was filled with colour, light and movement for a high-impact finale,” says Machado.

“The Clay Paky fixtures were fantastic in allowing us to alternate between bold looks and subtle effects, renewing the emotion of the audience for each song.”