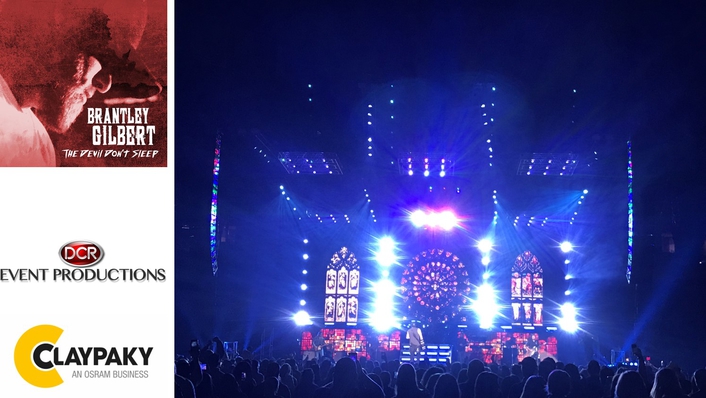 The tour supports Gilbert’s new album of the same name. Jones’ company, Nashville-based DCR, is supplying all of the show’s equipment; it has provided gear for Gilbert since before his first record deal.  The tour marks Alves/Jones second collaboration for the artist.

The Devil Don’t Sleep is a departure in design from Gilbert’s recent tours.  “In the past tours used truss structure to define a shape, like the motorcycle motif for last year’s tour,” Alves explains.  “Now we’re using digital scenery with videowalls front and center.  That gives us more flexibility to take him to a new creative environment for each song.”

The stage features five LED video surfaces.  A 20 x 20-foot LED is at center with 15 x 20-foot LEDs flanking them.  Two extreme letterboxes, measuring 20 x 6 feet each, are on the floor bookending the drums.

The lighting rig is the largest Gilbert has had, Alves notes.  Its large complement of Claypaky fixtures consists of 36 Mythos 2, 34 Scenius, eight Sharpys and 14 Stormy Strobes. 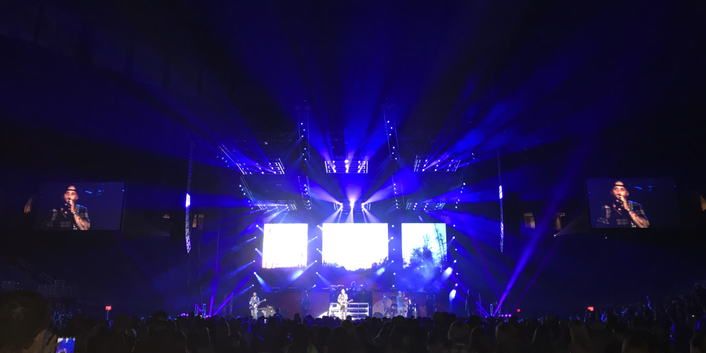 On The Devil Don’t Sleep the Mythos 2 fixtures separate the LED screens and are placed downstage as effects and back lights.  “They’re great at doing three or four different things: acting as a beam, as a wash light, and have a good field for lighting people,” says Alves.  “This show is about packing as much technology as possible in a small amount of truck space, and the hybrid nature of the Mythos 2 is a real help in that.”

Although a large portion of DCR’s inventory of Scenius and Mythos 2 is devoted to the tour, Jones reports that the fixtures have “been very busy” with “significant rentals” between tour legs.

Thirty-four Scenius serve as side and back lights.  “Scenius has a really great flat field for lighting humans,” Alves points out.  “I’m a big fan of its color range, too.  Scenius is a good meat-and-potatoes light that checks all the boxes.”

Eight Sharpys are positioned on the floor as effects fixtures.  “They’re the industry standard for beam lights,” says Alves.  The Stormy Strobes are placed at the end of every piece of overhead truss.

The Devil Don’t Sleep Tour is operated by Jack Bowers and is supported by Greg Shipley, crew chief and programmer.

A.C.T Lighting is the exclusive North American distributor for Claypaky.

Francesco Romagnoli, Claypaky Area Manager for North and Latin America, added, “It’s great to see such a full  compliment of our lights on this tour.  Mr. Jones and Mr. Alves have designed a very interesting rig.“