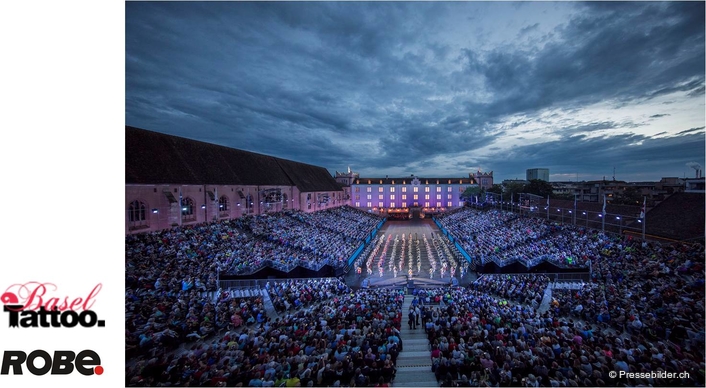 Seventy Robe BMFL moving lights – 48 BMFL Blades and 22 x BMFL WashBeams were used on the 2017 Basel Tattoo, one of the most important military tattoos in Europe, which is staged for a week in a temporary structure erected in front of the Kaserne former military barracks in the centre of the city in northwest Switzerland.

The BMFLs were part of a lighting scheme by Rolf Derrer for the week long Tattoo which features 10 shows and capacity audiences of 7500 for each one. Working closely with Rolf was programmer and his right hand person Reto Engler, who has worked on the event since 2013.
The BMFLs were supplied by Winkler Multimedia Events AG from Wohlen together with the rest of the lighting kit and the full technical production. Winkler’s technical director Roni Huber first started looking for new and more powerful fixtures after the 2016 show, when Reto and Rolf decided that it was time for a fresh, different look and approach to lighting the event … utilizing less fixtures, but brighter lightsources! 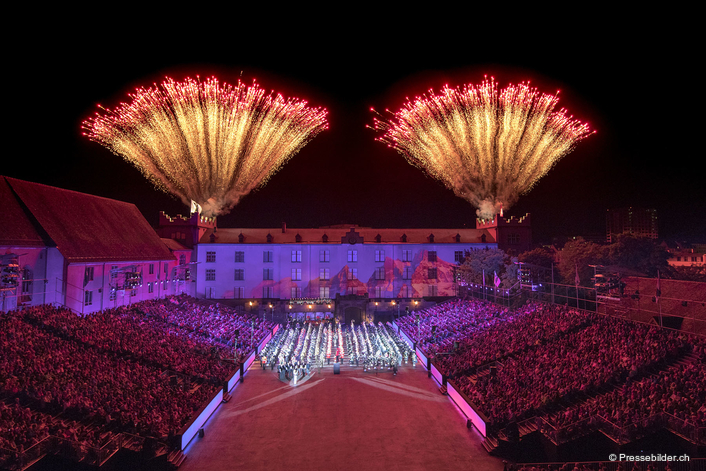 The 70 x BMFLs made a massive difference to how they could light the parade ground, which benefitted from a large boost in lumens to cover the whole space and the featured military bands plus three dance troupes, one horseback troupe and a motorcycle display team. The two hour all-action show was directed by Erik Julliard, producer and CEO of the Basel Tattoo. 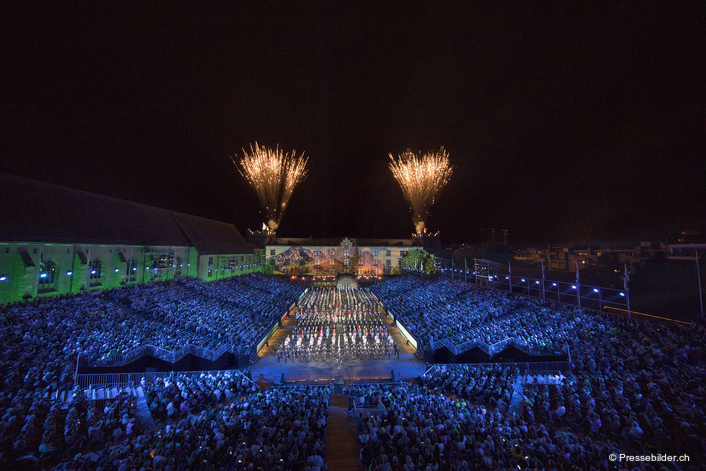 Left and right of the field-of-play were two MiTrix video screens and the front of the Kaserne building was mapped with large format projections, 66 metres wide by 11 metres high, fed by six Panasonic 31K machines. 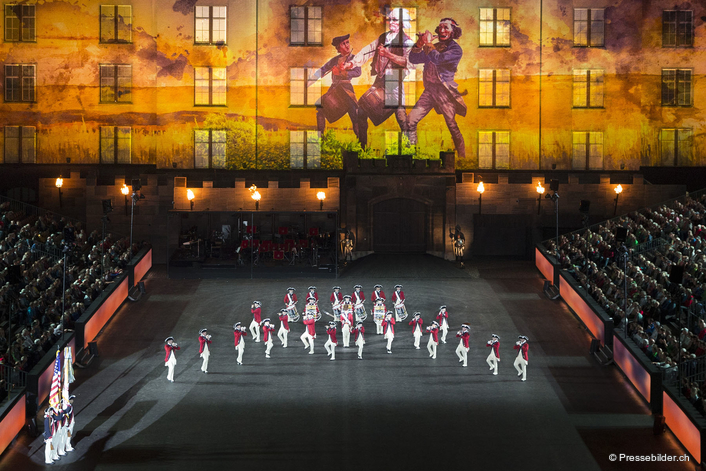 Rolf and Reto had to ensure that lighting was kept away from the projection on one hand, while it also had to hold its own against the brightness and ambient lighting emitted by the LED screens, presenting a ‘double edged sword’ scenario for which they needed the proper ‘multi-functionality’ of the BMFLs.
Each side of the performance space three Layher lighting towers were installed  and most of the 48 x BMFL Blades were rigged on these. 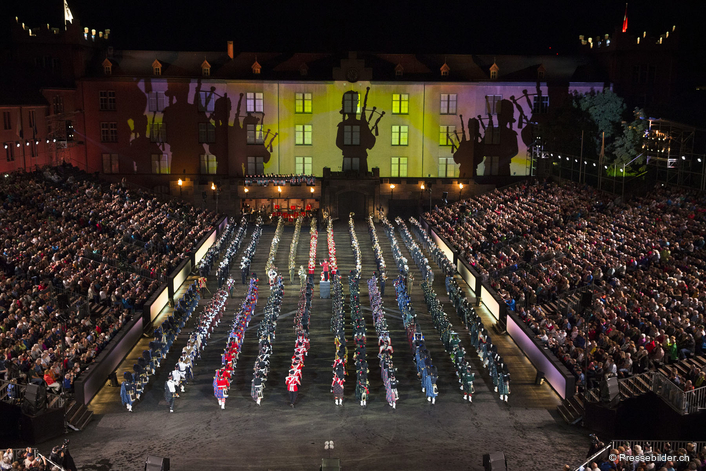 At the front of the parade ground, all the BMFL WashBeams were positioned on trusses at the back of the seating platforms, together with a few BMFL Blades. The fixtures were all used to illuminate the huge field-of-play and for key lighting some of the acts.
The BMFLs on the side towers were used for accurate side lighting and to create striking gobo patterning on the floor. 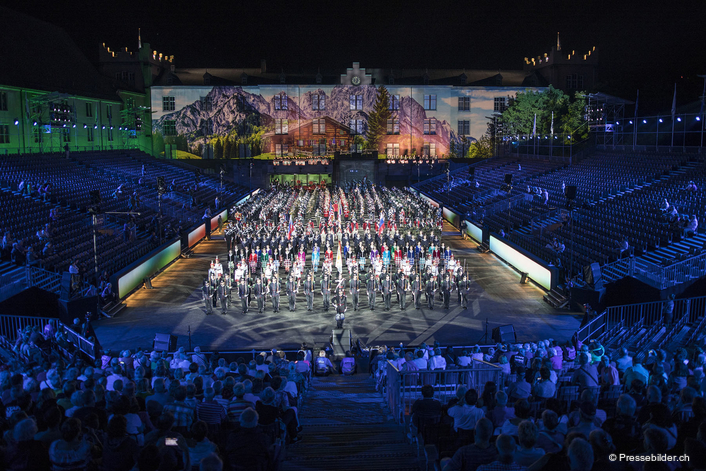 The most difficult aspect to lighting this show, explains Reto, was working with the weather which is never 100 per cent predictable! He reports that the BMFLs stood up to this extremely well.
The twilight part of the show is challenging, but with BMFLs on hand, they had the adaptability to really lift this section of the show and blend the event lighting perfectly with the natural lighting as the sun set.

With audience sitting 270 degrees around the parade ground and the bands marching in different formations using every centimetre of the performance space … and limited lighting positions, another challenge was ensuring that light was absolutely everywhere, so both audience and performers could see and engage with all the action!
On top of that, they had to be careful lighting any of the pieces involving horses, which don’t like stepping into dark patches!

“The output of the BMFL is excellent” commented Reto, “We really need the intensity of this show. The accuracy of the pan/tilt movement is also crucial, as we’re often up to 100 metres away from the point-of-focus”.
He adds that the frost filter was a great help in enabling good wash and spot functionality in a single fixture.
Reto, Rolf and Roni Huber - as the second lighting operator – programmed the show over four intense overnight sessions, working closely with media server programmer Michael Kuhn who was dealing with all the video content playback.

Reto has worked with Robe products many times over the last 10 years and is intending to use the BMFLs as follow spots on an upcoming project.
He thinks Robe has had their eyes on the ball in recent years and brought some good products to the market. He likes using BMFLs on large shows and thinks the Pointe is a state-of-the-art beam fixture that is infinitely versatile and appropriate for so many applications.
The new look lighting for the Basel Tattoo has been very well received.