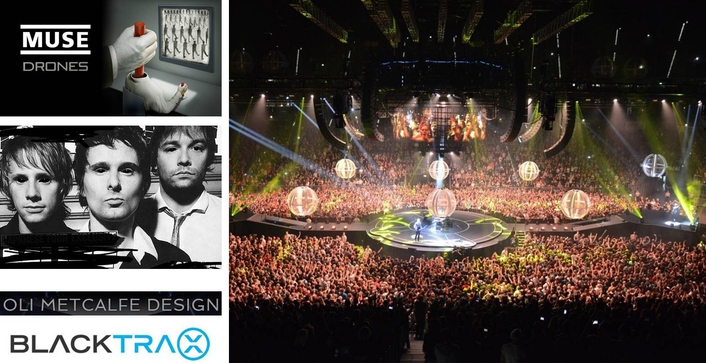 Largest-ever installation of BlackTrax for arena concerts is a technical feat!

The Drones tour combines tracking, lighting, videos, flying elements and a lot of creativity, to create visuals and spontaneous interactivity never seen before in a live rock concert like this one.

BlackTrax real-time motion tracking solution from CAST BlackTrax Ltd is used to track and manage three technical elements, from band members to massive drones that fly above the audience as well as for projection-based storytelling. The area tracked is BlackTrax’s largest to date!

Drones warns of Orwellian dangers and choices in modern life threatening to turn people into robots. Somewhat Sci-Fi, the audience revolts and takes a thrilling journey musically and visually.

“We’ve worked with Muse for sixteen years and push pioneering technology to its limits at each arena, in front of around 24,000 people each time,” says Oli Metcalfe who also designs lighting and stage concepts for a number of international artists.

Moment Factory co-founder and chief of innovation Dominic Audet said: “BlackTrax is the only solution that was out there that could reliably be used to track new interactive 3D technology on an unprecedented scale. The immersive interactive and pre-rendered video content experience we provided is one of the most ambitious and innovative concert projects Moment Factory has ever undertaken.” 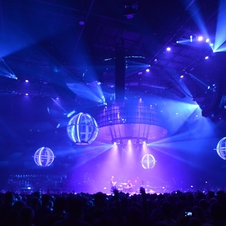 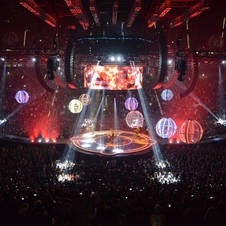 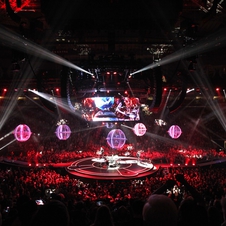 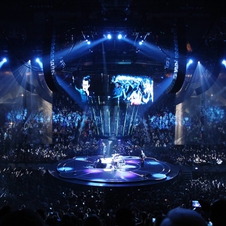 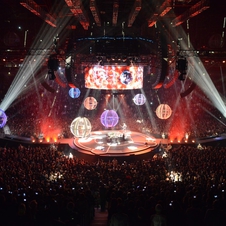 Taking the stage to the spectacular

“Drones took a year to design and test,” adds Metcalfe. “We conduct a laser scan of each venue and created workflows of video, lighting, and actors using wysiwyg lighting design and previsualization software. This gave us accurate data for placement of BlackTrax tracking cameras showing how the system would work before we even got there. Running BlackTrax with wysiwyg is critical.” 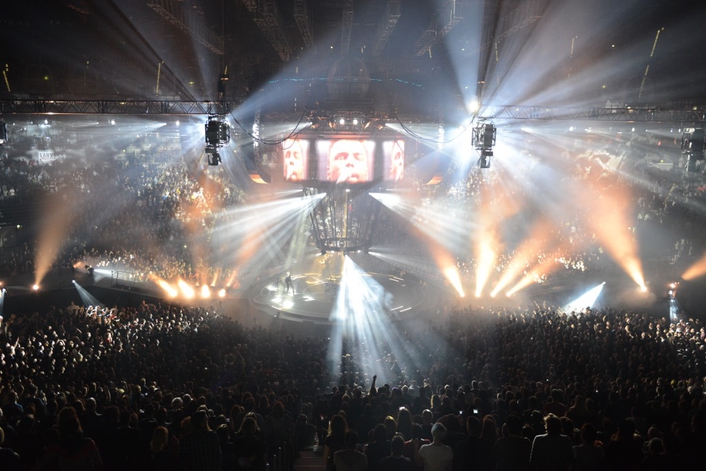 During the show, larger ‘Reaper’ aircraft-like drones with glowing LEDs are launched into the audience and are tracked alongside lighting fixtures while flying through the arena. All drones in the production are completely autonomous.

A large, cylindrical LED video screen is hung at centre. Content is managed using Catalyst media servers, and within it LED video strips come cascading out. The large LED wall comprises 85 square meters and is used for content as well as IMAG camera shots. In addition to the wall, semi-transparent projection screens (voiles) run all the way through the North and South sections of the stage in the middle of each catwalk, which rolls in from above as needed. These voiles also form a cylindrical column around the main center stage. Here a holographic video effect is created using a hidden projection surface. 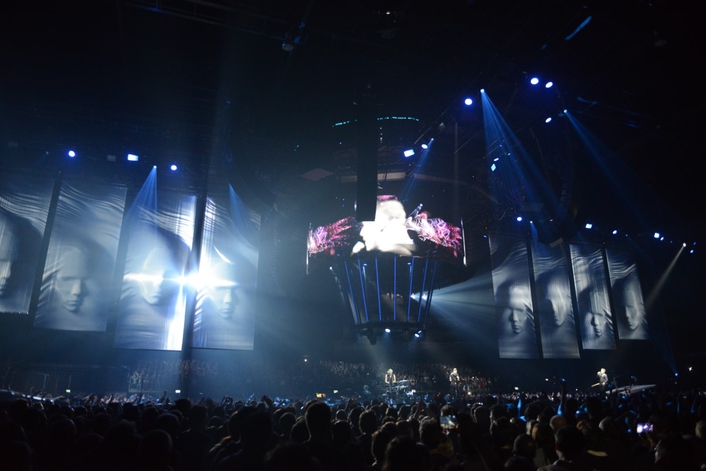 In total, thirty-eight BlackTrax cameras are used for tracking of drones and performers. The tracking system includes fourteen drone trackables and three artist trackables. The system runs on an active server with backup / slave system and integrates with twenty-four Mac Viper Air FX, and six Clay Paky Mythos lighting fixtures. Positional information is sent to Barco’s XPR media servers, which manage content across twelve Barco HDF-W30 FLEX projectors. Each projector is fitted with custom-made moving mirrors to focus on either the 200 square meters of projection voile or to be used as area effects around the arena. 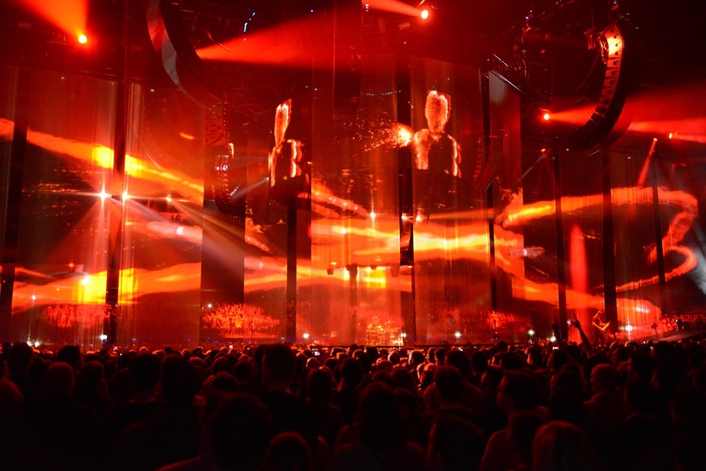 “Each day they are turned on and work right away with no need for adjustment! The BlackTrax system allowed us to go into areas of such high altitude and are placed in such a way that makes the whole arena trackable - an important element, considering the drones fly around the stage and above the audience - they are tracked by BlackTrax for safety watch and collision detection,” adds Metcalfe.

Each drone is piloted by the Dutch company Path65 and their proprietary motion control system, which performs remote control the drones through a predesigned flight path. BlackTrax is also used to send the drones positional data in real-time to Path65’s controller system and warns it in case a wind gust moves the drones away from the flight path or if there is a potential risk of collision.

“Tracking the drones made sense as BlackTrax integrates so well with third-parties and other visual aspects of the show,” explains Metcalfe. 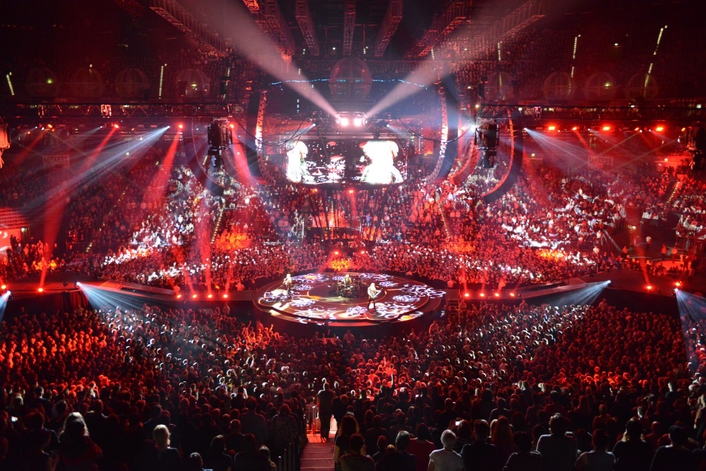 The three band members wear one trackable beacon each, but each beacon uses three tiny LEDs that are recognized by the BlackTrax cameras as tracking points. It doesn’t matter where the band members go on stage, where they turn or how fast they run, BlackTrax provides a solid tracking on stage. “The system works faultlessly and having up to 20 lighting beams on the front man at a certain point in the concert couldn’t be possible without BlackTrax! The effect is magic! We deliver the best keylight we’ve ever had,” says Metcalfe.

“We chose this route because the show is in the round and uses a large number of follow spots. I felt that I needed to try the new technology as it impressed me the first time I saw it and that decision really paid off.”

For the interactive video projection elements, Metcalfe explains: “We created specific looks that rely on tracking information to know the band member’s position. One of the looks is a set of cables or ‘strings’ that comes down from a master puppeteer’s hands to create an interactive effect. If the band member moves around, the wires attached to them also move so they are always connected to the strings. Another look to the show is a rocket which is fired down on the stage using a silhouette effect.”

The Drones tour combines tracking, lighting, videos, flying elements and a lot of creativity, to create visuals and spontaneous interactivity never seen before in a live rock concert like this one.

Metcalfe adds: “BlackTrax will go down in history as a disruptive stage tool that breaks all boundaries in terms of creativity."